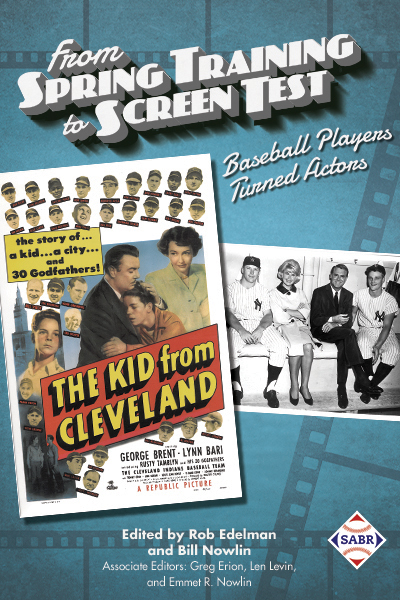 Just in time for the Academy Awards, SABR's book of baseball's "matinee stars" is now available from the SABR Digital Library to add to your collection:

For well over a century, stars and supporting players on baseball diamonds have become stars and supporting players in the movies, on Broadway, in vaudeville and, eventually, on television and in concert halls. After all, ballplayers are celebrities. Whether on the field or the stage, they are in the business of entertaining the masses. Not surprisingly, many showbiz luminaries have become baseball enthusiasts. They have invested their time, money, and expertise to be part of the baseball world as team owners and fans.

From Spring Training to Screen Test: Baseball Players Turned Actors includes essays by 43 SABR members that connect baseball and show biz. Not every ballplayer who ever made an appearance on screen or stage is included; to do so would result in a mini-encyclopedia. The purpose here is to offer a representative selection of those who crossed the lines between professional sports and popular entertainment. Included are biographies of selected individuals from the famous (Gene Autry, Joe DiMaggio, Jim Thorpe, Bernie Williams...) to the forgotten (Al Gettel, Lou Stringer, Wally Hebert, Wally Hood...) There are other select topics, from baseball on television shows and in Coca-Cola commercials to Jim Bouton’s casting as “Jim Barton” in his Ball Four TV series and Don Drysdale playing “Don Drysdale” on The Donna Reed Show, Leave It To Beaver, and The Brady Bunch. Those who will relish the privileged peeks at the off-the-field life and times of Mike Donlin and Edward G. Robinson playing Hans Lobert on the big screen in Big Leaguer will surely savor From Spring Training to Screen Test: Baseball Players Turned Actors.