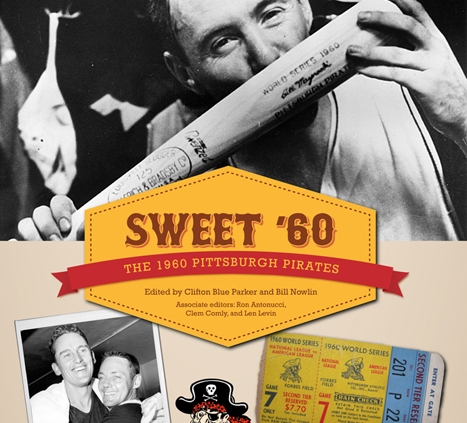 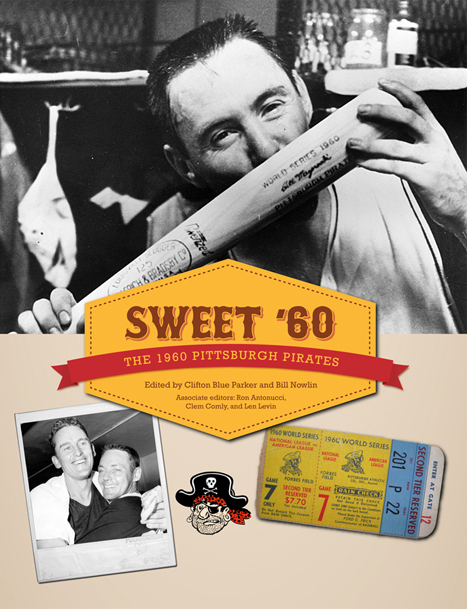 Sweet ’60: The 1960 Pittsburgh Pirates is the joint product of 44 authors and editors from the Society for American Baseball Research who have pooled their efforts to create a portrait of the 1960 team which pulled off one of the biggest upsets of the last 60 years.

At 3:36, Bill Mazeroski swung at Ralph Terry’s slider. As Curt Smith writes in these pages:

“There goes a long drive hit deep to left field!” said Gunner. “Going back is Yogi Berra! Going back! You can kiss it good-bye!” No smooch was ever lovelier.

Woods didn’t know—only that, “I’m looking at the wildest thing since I was on Hollywood Boulevard the night World War II ended.”

David had toppled Goliath. It was a blow that awakened a generation, one that millions of people saw on television, one of TV’s first iconic World Series moments.

For 40 years, SABR and its members have led the way in publishing the best baseball historical and statistical research. Our publications program is shifting to take advantage of new methods of publishing. Not only will we continue to publish new books like CAN HE PLAY? A Look At Baseball Scouts and Their Profession (released in December 2011); OPENING FENWAY PARK IN STYLE: The 1912 World Champion Red Sox (May 2012); Red Sox Baseball in the Days of Ike and Elvis: The Red Sox of the 1950s (September 2012) and Detroit Tigers 1984: What A Start! What A Finish! (December 2012), which showcase the best efforts of SABR’s members, chapters and committees, but new technology makes it possible for us to bring out-of-print titles like RUN, RABBIT, RUN: The Hilarious and Mostly True Tales of Rabbit Maranville (February 2012), GREAT HITTING PITCHERS (March 2012), NINETEENTH CENTURY STARS (August 2012) and Batting (January 2013) back again. Books will be available in digital formats as well as paperbacks produced by “print on demand” (POD).