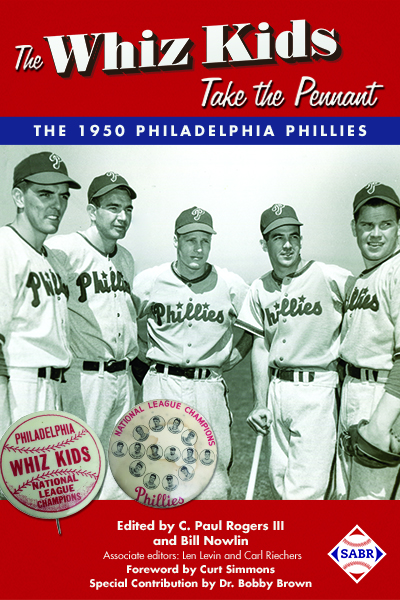 Add this new baseball book from the SABR Digital Library to your collection:

The 1950 Philadelphia Phillies ― the “Whiz Kids” ― threatened to run away with the pennant, but slumped badly in late summer before finally beating the Brooklyn Dodgers in a thrilling 10-inning game on the last day of the season. That day at Ebbets Field they won only the second pennant in Phillies history and their first in 35 years. Between the two pennants, the Phillies were mostly dreadful, finishing in the first division only once between 1917 and 1949, and dead last 16 times between 1919 and 1945, including five straight years from 1938 to 1942, once finishing 28½ games out of seventh.

This book tells the stories of those Whiz Kids, a team with one of the most memorable nicknames in baseball history. Not only does this volume recap how their run to the flag was marked by clutch hitting and pitching in close games, it contains biographies of every player who appeared, including Richie Ashburn, Robin Roberts, Willie "Puddin' Head" Jones, and Eddie Waitkus. Game stories and many other features about this unique team round out the volume. In addition to a foreword by Whiz Kid Curt Simmons, it even contains a “View From the Other Side” by Yankees third baseman and former American League President Dr. Bobby Brown.

This book is also the product of the dedicated, uncompensated work of 36 members of the Society for American Baseball Research, all of whom share a love of baseball and its rich history. Even for the most knowledgeable baseball fan, what follows is a treasure trove of fascinating anecdotes and facts about a bygone era of baseball when the uniforms were flannel, the players still left their gloves on the field between innings, and the games were played in two hours.