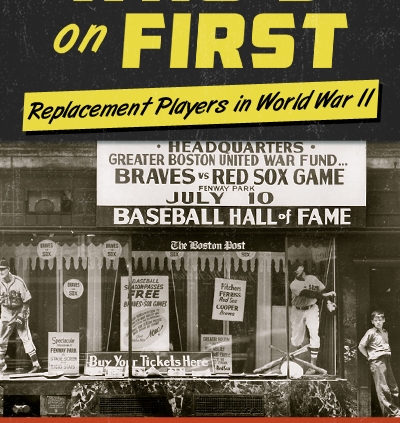 Add a book about baseball’s true “replacement players” to your collection with the newest title from the SABR Digital Library: 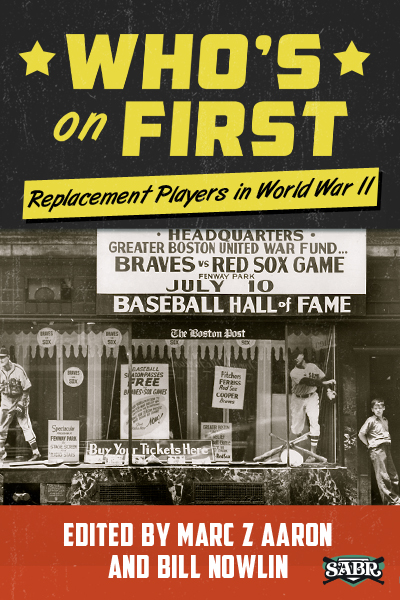 During the four seasons the U.S. was at war in World War II (1942-1945), 533 players made their major-league debuts. There were 67 first-time major leaguers under the age of 21 (Joe Nuxhall the youngest at 15 in 1944). More than 60 percent of the players in the 1941 Opening Day lineups departed for the service. The 1944 Dodgers had only Dixie Walker and Mickey Owen as the two regulars from their 1941 pennant-winning team.

The owners brought in not only first-timers but also many oldsters. Hod Lisenbee pitched 80 innings for the Reds in 1945 at the age of 46. He had last pitched in the major leagues in 1936. War veteran and former POW Bert Shepard, with an artificial leg, pitched in one game for the 1945 Senators, and one-armed outfielder Pete Gray played for the St. Louis Browns.

The war years featured firsts and lasts. The St. Louis Browns won their first (and last) pennant in 1944 — a feat made more amazing by the fact that they had not finished in the first division since 1929. The 1944 team featured 13 players classified as 4-F. The Chicago Cubs appeared in the 1945 World Series but have not made it back since.

More than 50 members of the Society for American Baseball Research (SABR) have contributed to this volume. We invite you to sit back and relax as you learn Who’s on First.

For 40 years, SABR and its members have led the way in publishing the best baseball historical and statistical research. Our publications program is shifting to take advantage of new methods of publishing. Not only will we continue to publish new books like CAN HE PLAY? A Look At Baseball Scouts and Their Profession (released in December 2011); OPENING FENWAY PARK IN STYLE: The 1912 World Champion Red Sox (May 2012); Detroit Tigers 1984: What A Start! What A Finish! (December 2012); Sweet ’60: The 1960 Pittsburgh Pirates (April 2013); Inventing Baseball: The 100 Greatest Games of the 19th Century (July 2013), Thar’s Joy in Braveland: The 1957 Milwaukee Braves (May 2014), and Winning on the North Side: The 1929 Chicago Cubs (February 2015) which showcase the best efforts of SABR’s members, chapters and committees, but new technology makes it possible for us to bring out-of-print titles like RUN, RABBIT, RUN: The Hilarious and Mostly True Tales of Rabbit Maranville (February 2012), GREAT HITTING PITCHERS (March 2012), NINETEENTH CENTURY STARS (August 2012); Batting (January 2013), The Fenway Project (September 2013), and The National Pastime: Premiere Issue (December 2014) back again.