SABR Digital Library: Winning on the North Side: The 1929 Chicago Cubs

As we get ready for SABR 45 this summer in Chicago, add a Windy City baseball book to your collection from the SABR Digital Library: 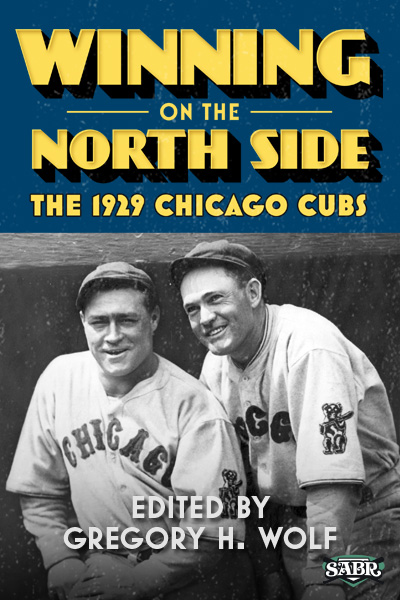 “The best team I ever played on was McCarthy’s twenty-niners. It was strictly power all the way. No tricky baseball.” — Cubs first baseman Charlie Grimm

SABR's newest e-book celebrates the 1929 Chicago Cubs, one of the most exciting teams in baseball history. Bashing their way to the pennant by crushing their opponents in a high-scoring era, skipper Joe McCarthy’s North Siders were an offensive juggernaut, leading the majors with 982 runs scored. Future Hall of Famers Hack Wilson, ’29 NL MVP Rogers Hornsby, and Kiki Cuyler, along with Riggs Stephenson formed one of the most potent quartets in baseball history, collectively scoring 493 runs and knocking in 520. As awe-inspiring as the Cubs offense was, their pitching was almost as good. Charlie Root, Guy Bush, and Pat Malone anchored a staff that finished second in team ERA and led the league in shutouts.

The Cubs’ magical season came to an ignominious conclusion when they faced Connie Mack’s Philadelphia Athletics in the World Series. Long before the “lovable loser” moniker was attached to the Cubs, Chicago’s crushing defeat in five games helped craft the narrative of fateful losses.

The Society for American Baseball Research (SABR) invites you to read the life and baseball stories of all the roster players and the coaching staff and relive an important part of baseball history. Also included are biographies of club owner William Wrigley, visionary executive Bill Veeck Sr., and Margaret Donahue, the first female executive in baseball history. A summary of the regular season and World Series, as well as essays on the 1929 Athletics, Wrigley Field, Catalina Island, and fate of the Cubs after 1929 round out this volume. With contributions from 26 members of the SABR BioProject, this book is a riveting account of one of the most memorable teams in Chicago sports history.

Join us this summer in Chicago: Have you registered for SABR 45 yet? The 45th annual SABR convention will be held June 24-28, 2015, at the Palmer House Hilton in Chicago. Registration and information can be found at SABR.org/convention. All baseball fans are welcome to attend.