At age 27, right-hand pitcher Jeff Bajenaru is living the life most SABR members spend their time daydreaming about. A college All-American at Oklahoma University with a stint at Riverside Community College in California, Bajenaru joined the White Sox organization in 2000. After recovering from surgery in 2002 and paying his dues in the minors, Bajenaru made his big-league debut on September 4, 2004.

Editor’s note: This article originally appeared in the February 2006 edition of the SABR Bulletin. Jeff Bajenaru is one of the few active major-leaguers to join SABR during their playing careers; others include the San Diego Padres’ Kurt Bevacqua and Terry Kennedy (1985) and the Colorado Rockies’ Jerry Dipoto (2000). 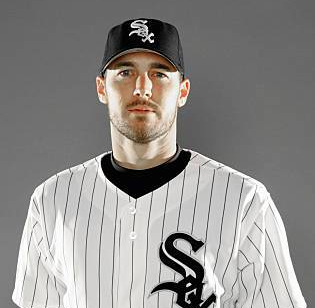 At age 27, right-hand pitcher Jeff Bajenaru is living the life most SABR members spend their time daydreaming about. A college All-American at Oklahoma University with a stint at Riverside Community College in California, Bajenaru joined the White Sox organization in 2000. After recovering from surgery in 2002 and paying his dues in the minors, Bajenaru made his big-league debut on September 4, 2004. After appearing in nine relief appearances with the Sox, Bajenaru ended the season 0-1 with a 10.80 ERA.

At the start of 2005, Bajenaru returned to Triple-A ball and pitched with distinction. His White Sox player bio recaps his 2005 season succinctly, “For the second straight season, the right-hander emerged as a standout closer at the Minor-League level. After saving 22 games for Double-A Birmingham and Triple-A Charlotte combined in 2004, Bajenaru earned International League All-Star status with Charlotte by posting a miniscule 1.41 earned run average over 61 games. He saved 19 and struck out 92 over 70 1/3 innings. Bajenaru pitched in four games for the White Sox, posting a 6.23 earned run average over 4 1/3 innings.”

So what does the future hold for Jeff Bajenaru? Good things we hope. A SABR member since 2005, he displays the poise, presence and persistence that makes great things happen. We’re happy to have the opportunity to chat with him in this issue’s SABR Nine.

Who has been the biggest influence on your professional baseball career so far?

First of all I’d have to say my dad. Because when I was seven years old, I refused to play baseball. I literally remember hiding under the table refusing to play baseball. He said, “You’re going to play one year, if you don’t like it you don’t have to play again.” He’s been the biggest influence on my life in regards to working with me, practicing with me, teaching me how to throw and all that stuff. On the [professional] baseball side of it, it’s been Dennis Rogers, the head coach at Riverside Community College in California. I transferred over there my freshman year of college from a D-2 school and he was unbelievable. He taught us about the mental side of the game and visualization … stuff I’d never even heard of. As far as that goes, he was definitely by far the biggest influence in the game.

Has coaching and instruction in college and the minor leagues impacted your level of play?

I would have to say more so in college. Just because there’s a little bit more teaching that goes on. I mean, don’t get me wrong, in the minor league there is still teaching going on, but it’s more maintenance, making little adjustments here and there and keeping you on the right track. I was a five year college student so I didn’t need a ton of work as opposed to a guy in high school who may need a little more instruction.

What does it take to get noticed in college ball and in the minor leagues?

[Chuckling] I would have to say that you have to throw really hard or just have ungodly talent. When Iwas in college, I thought I was a pretty good hitter also and I didn’t get one sniff. But I was on the mound in college and occasionally I would hit 94, 95 mph and that’s what got me noticed. I mean, my sophomore year at Riverside I threw like ten innings and I got drafted in the 13th round. I didn’t do anything! It’s tough to say, because I’m more of a self-made player. I don’t have the outright talent or the size that a lot of the guys have and I got overlooked a lot, especially like in high school and all that. So it’s tough. You just got to keep working hard and plugging away and someone may take a notice. But it is not one thing; I would have to say that persistence plays a lot in it. I know a lot of guys that got overlooked, never even got drafted. They’re done with college and they still went to play independent ball. They just kept plugging and plugging and they got a shot.

What are some of the best and worst things about playing in the minors?

The worst thing I would have to say is that you’re not in the major leagues. [Laughing] The bus trips, the travel, the hotels are just horrible sometimes. But those are some of the best things also. You’re going through this terrible situation with 24 other guys and you’re just miserable, but at the same time you’re laughing about it … what a joke it is. So, those can also be pretty fun times. I enjoy traveling the country and seeing things. In the major leagues I guess you skip over a lot of that because you just hop on a plane and go.

Do you miss being able to bat?

Yeah. I mean it’s been almost six years now so I’ve kinda gotten over it, but those first couple of years were tough. I knew I could go out there and still compete and put up decent numbers. I know I wouldn’t have, you know, hit over .300 or anything like that, but I know I could have held my own. Be cause, like I said, I think I was more of a self-made player and I worked to get better … I wasn’t just a good hitter.

In today’s game, what in your opinion is the hardest thing about transitioning from Triple-A to the major leagues?

Personally, for myself, I would have to say … because I’ve had two little call-ups here now … haven’t done great, obviously … I honestly think the hardest thing is adjusting to your role. Because I’ve always been a closer in the minor leagues, not always by choice, it’s just the role I always seem to fall into. And when you get called up, you’re the mop-up guy. They’re expecting you to come in and throw strikes. Well, you know, you’re not used to coming in and just pumping strikes and trying to get out of a quick inning. You’re trying to do a job and get out of things. It’s tough, because you end up getting hit around and taking yourself out of your game and that’s what I’ve experienced. In 2004 in September I was [called up], and in September 2005 I was [called] up. I honestly try to stay to my game and I don’t try to change what I do. The only times that I got hit, both years, was when I was changing everything that I was doing. Like I’d get behind 2-0, and I’d pump a fastball down the middle which is totally not my game. I mean I’ll throw an off-speed pitch to him, I don’t care. I’d rather walk a guy once in a while than give him a fat pitch to hit. Against Cleveland this year I did that twice … 2-0 and a 3-1 count. Two home runs back-to-back, I think. So I would never normally do that. You’re out there thinking, “I got to get through this inning.”

Why did you decide to wait a year when you were drafted by Oakland in 1998?

Well, like I said, I only threw 10 or 12 innings that year and it was kind of a shock to me. I was going on a lot of recruiting trips to different schools and I was pretty much ready to go to college. I had been overlooked in high school and I didn’t get any offers for anything. My dream at the time was pretty much to get a scholarship to college. Right at this point I was about to do that. So when I got drafted that was right out of nowhere. That was beyond my dreams. So I guess it would be harder to turn it down but at the same time [you have to say], ‘I’m going to take this first step in getting a scholarship and going to school and see what comes out of that.’ I wanted my degree [in criminology and sociology] and I knew if I didn’t go then it would be really tough to go back.

Do you have any memories about your first major league game that stick out in your mind?

Definitely, I think we were winning 7-2, [Mark] Buehrle had pitched an awesome game but Ichiro had gone 4-4 off him, and earlier in the game he threw an eephus pitch to him. I remember that … I thought that was hilarious. And then I came in so we were up 5 or 6 runs and I got the first guy out. Ichiro comes up and he just chopped one off the plate and it went over the first-baseman’s head for his fifth hit. [Sarcastically] So that was great. He didn’t hit me hard, but he’s that good of a hitter he does whatever he wants with it. That’s pretty much what I remember.

Where do you see yourself in five years?

I see myself being a middle reliever for some team. Either a middle reliever or a set-up guy. I feel that I will get my shot and get the chance to play a full season, which is what I need to succeed. It’s tough pitching a month at a time, sporadically, once every two weeks or whatever. If I get a chance to pitch, and pitch on a regular basis, I think I can be very successful. I do believe I’ll get a shot whether it will be with the White Sox or any other team. The White Sox always preach that you’re not just pitching for us, you’re pitching for 29 other teams so that’s the mentality I take out there.