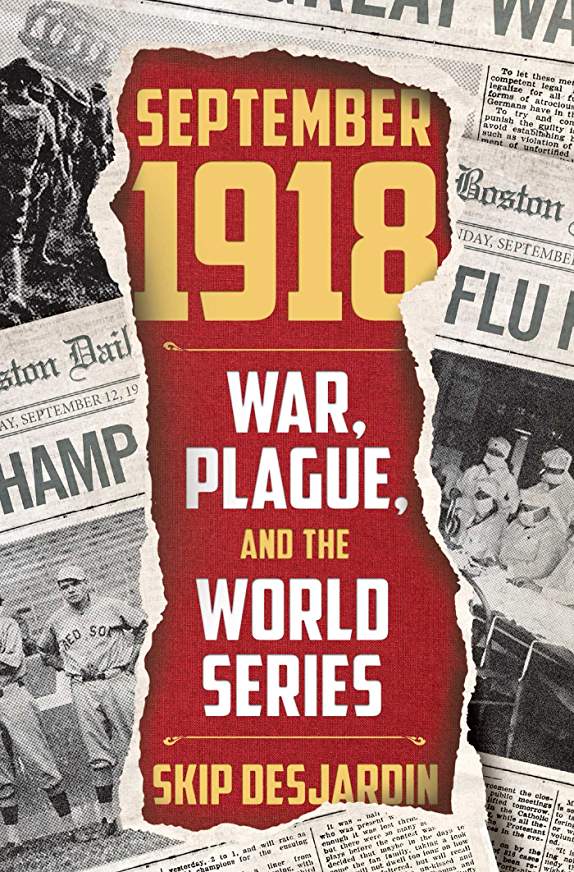 Skip Desjardin has earned the 2019 Larry Ritter Book Award for his gripping historical account of an epic month of triumph and tragedy, September 1918: War, Plague, and the World Series, published by Regnery History.

Desjardin masterfully laces together the story of the convergence of three powerful themes, all with strong connections to the city of Boston and its suburbs — a World War, a World Series, and a deadly influenza pandemic — by telling the stories of individuals caught up in the events of the month. The book follows the late summer arrival of a division of Massachusetts volunteer militia in France, where the Allies and Axis powers are at a stalemate after fighting World War I for nearly four years.

Desjardin tells stories about individual soldiers, including David Putnam, a teenager from Boston who becomes the first United States fighter ace. While Putnam fights in the skies, other men of the Yankee Division endure modern warfare and poisonous gas attacks in the trenches, and become part of the surge of American troops that tip the balance of power to the Allies, leading to the end of the war in November.

As the Yankee Division arrives in Europe, the major league baseball season ends early as the nation mobilizes for war and able-bodied men are ordered to work (in war-related industries) or fight. The government allows players to remain with their teams so that the World Series between the Boston Red Sox and Chicago Cubs can be played in early September.

Despite the boisterous presence of young pitcher Babe Ruth, the Fall Classic is a joyless one. Some fans resent that the players from the two teams have been able to avoid the work or fight order so that they may play in the Series. The shorter season and smaller crowds in the wartime climate have led to reduced revenues, and when the players on both teams learn that the winner’s and loser’s shares for the Series have been reduced by tightfisted club owners, they threaten to strike before the fourth game.

Faced with public hostility and unyielding league executives, the subdued players return to the field and the Red Sox defeat the Cubs four games to two, winning their fifth World Series in 15 years, though they will not win another for 86 years.

Even as the World Series is being played, a virulent influenza epidemic (known as the Spanish Influenza Pandemic) spreads through the city. The epidemic is carried to Boston by troops arriving at training camps around the region, and conveyed to other soldiers, sailors, and the civilians with whom they make contact, continuing to spread exponentially as people interact. Desjardin deftly tells the rich individual stories of some of the victims, and the doctors and nurses who tended to them. He vividly describes the horrors and suffering caused by disease, and details the experiences of victims in hospital wards or in confinement in their own houses. Most unsettling is the randomness, as some individuals and whole families perish, while others survive.

As September churns on, the number of influenza cases and the death toll rises (the pandemic will kill an estimated 50 million worldwide). Desjardin chronicles the response of government officials, more concerned about the war effort and avoiding panic, than they are about the worsening public health crisis, to deny and minimize the scope of the disease, actions which contribute to the proliferation of the epidemic.

It was the interaction of all of these events that compelled Desjardin, a first time author, to write September 1918.

“I was a fan of the young Babe Ruth, in contrast to the fat newsreel version we know today. Then I read the Dennis Lehane novel, The Given Day, set in Boston in 1919 and wondered why the World Series in 1918 was played in September instead of October, and I wondered why anyone would go out to Fenway Park when doing so could kill you,” Desjardin said.

September 1918 is Desjardin’s first book, though he has a wealth of media experience. A native of Maine and a graduate of Notre Dame University, he has served as a journalist, an on-air television anchor, a producer, and a programming director. A former ESPN vice president, he now serves as head of sports for YouTube TV, a Google company.

Conferred annually since 2002, this year’s Ritter Award will be formally presented to the winner at the DEC meeting at SABR 49 in San Diego.

Desjardin is unable to attend the ceremony because he will be in London for the Boston Red Sox-New York Yankees series, but does plan to address the gathering by means of a video recording.

“I’m so grateful and honored to be following in the footsteps of people on my own bookshelf like Jim Leeke and Glenn Stout, and amazed to be associated in any capacity with Larry Ritter’s great work,” Desjardin said when notified of the award. “It’s amazing to me as a first time author. I don’t do this for a living. It’s a passion for me.”