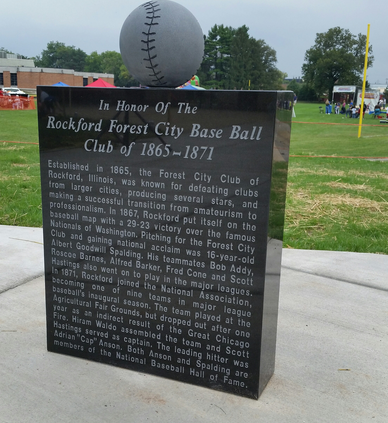 Editor’s note: A version of this article originally appeared at Seamheads.com.

On August 29, 2015, Rockford, Illinois, celebrated the grand re-opening of Beyer Stadium Park, which was the home of the Rockford Peaches of the All-American Girls Professional Baseball League from 1943 to 1954. But on this day, two of Rockford’s teams were honored with hundreds in attendance. 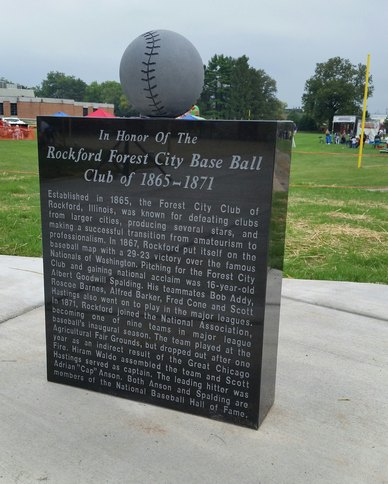 Mike Garrigan, an evening anchor at WIFR radio, was master of ceremonies. Okeyma Lundeen, a baseball player for the Rockford Starfires, led the event off by singing the National Anthem. Various city and park officials spoke, along with past players from the Rockford Peaches. The Rockford Barbershop Chorus provided entertainment. Actress Ann Cusack, who played Shirley Baker in the 1992 film A League of Their Own, was unable to attend but sent a video message.

When the ceremony concluded, all were asked to gather at the entrance of the new historic walkway, where a ribbon was cut. As the crowd proceeded down the walkway to the first attraction just inside the entrance, I was given the honor to speak a few words and then unveil the Rockford Forest City Base Ball Club of 1865-1871 monument.

I spoke about it being part of my monument series that began in 2005, for player Fred Merkle. Until this year I only honored players and teams from the Deadball Era, 1901-1919, and now I decided to expand the series into the earlier years of baseball.

I received funding from proceeds  of a SABR member-produced book called Base Ball Pioneers, 1850-1870: The Clubs and Players Who Spread the Sport Nationwide, which helps pay for a good percentage of a monument. The funds could be used to honor any player or team I wanted, anywhere in the country.

It became obvious and appropriate to honor the Forest City Club. The Forest City Club of Rockford was a member of major league baseball’s inaugural season in 1871. This was due to their play leading up to 1871. The team was established in 1865 as the boys returned home from the Civil War, and put Rockford on the map. The city prospered from the game of baseball and 2015 marked the 150th anniversary of the team’s beginning and marked the 100th anniversary of the passing of team legends Albert Goodwill Spalding and Ross Barnes.

Rockford is the only city that may claim to have teams in both the inaugural seasons of Major League Baseball and the All-American Girls Professional Baseball League. So the first monument in the series honoring the earlier years should be in Rockford, a city that has been referred to as “The Cradle of Baseball.”

The front of the monument reads:

Established in 1865, the Forest City Club of Rockford, Illinois was known for defeating clubs from larger cities, producing several stars, and making a successful transition from amateurism to professionalism. In 1867, Rockford put itself on the baseball map with a 29-23 victory over the famous Nationals of Washington. Pitching for the Forest City Club and gaining national acclaim was 16-year old Albert Goodwill Spalding. His teammates Bob Addy, Roscoe Barnes, Alfred Barker, Fred Cone and Scott Hastings also went on to play in the major leagues. In 1871, Rockford joined the National Association, becoming one of none teams in major league baseball’s inaugural season. The team played at the Agricultural Fair Grounds, but dropped out after one year as an indirect result of the Great Chicago Fire. Hiram Waldo assembled the team and Scott Hastings served as captain. The leading hitter was Adrian “Cap” Anson. Both Anson and Spalding are members of the National Baseball Hall of Fame.

The back of the monument reads:

In 1876, the first season of the National League, Anson, Spalding, Barnes and Addy helped bring the Chicago White Stockings, now known as the Cubs, their first pennant. 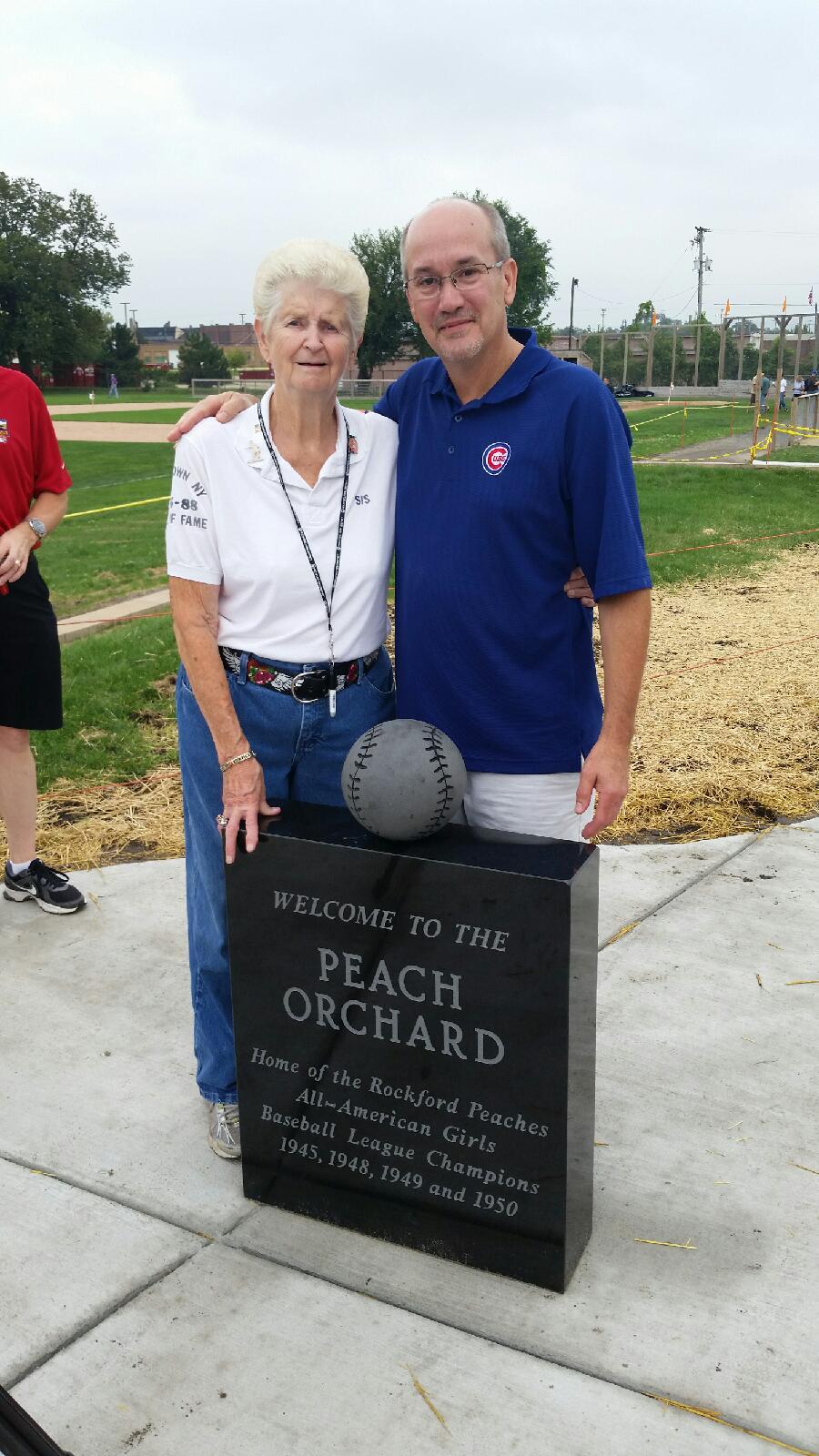 As we continued walking along the historic walkway, a second monument was unveiled for the Rockford Peaches and the All-American Girls Professional Baseball League. A very nice donation was made by the AAGPBL.

WELCOME TO THE PEACH ORCHARD

Plaques around the monument were then unveiled, honoring the players. Former player Helen “Sis” Waddell-Wyatt unveiled one of herself, as did Lou “Erickson” Sauer. The daughter of Dorothy “Dottie” Ferguson Key unveiled her mother’s plaque and Charlene Hawes (O’Brien) unveiled one for the Peaches batgirls.

Moving along and onto the field both dugouts were unveiled with murals commemorating the Peaches and their history. At this time, Greg Schwanke announced the Peaches’ names and positions and the Starfire players placed signs at their respective positions around the field.

The afternoon concluded with food and entertainment for the kids and Peaches players signing autographs. Petitions were signed for Ross Barnes’s election into the Baseball Hall of Fame and baseball cards of Barnes were given away, courtesy of Gary Passamonte who lives in Barnes’ birthplace of Mount Morris, New York.

The original Beyer Stadium was torn down in the 1990s except for the ticket booth entrance. Led by a dream, along with continued efforts of Greg Schwanke and Steve McIntosh of Friends of Beyer Stadium, this real-life “Field of Dreams” is thriving again. They continue to build and more people continue to come. Since 2012, Beyer Stadium Park has been home to the women’s baseball team, the Rockford Starfires.

Great pride may be taken having the Peaches and three of the greatest 19th-century players in Cap Anson, Ross Barnes, and Al Spalding, all playing for Rockford. Both Barnes and Spalding grew up in Rockford, and Barnes is buried at Greenwood Cemetery.

For more photos of the ceremony, visit Seamheads.com.

David Stalker is a member of SABR’s Deadball Era Research Committee. He lives in Watertown, Wisconsin.