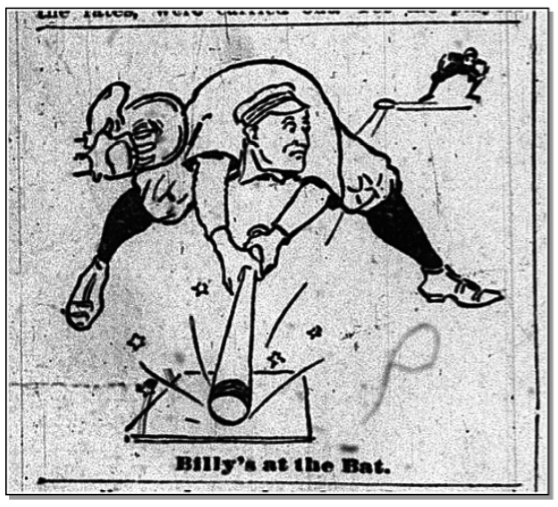 The Buffalo Bisons got off to a slow start at the beginning of the 1895 Eastern League season, losing seven of their first 10 games, all of which were on the road. Their manager, Charlie Morton, held out hope that the team would turn things around as the weather got warmer.[fn]“Season Will Open Here Today on the East-Side Grounds,” Buffalo Express, May 12, 1895.[/fn] Morton could not have been pleased to discover the cold temperatures the Queen City was experiencing when the Bisons returned to Buffalo to open the home schedule at Franklin Park.

The Buffalo Express said that the weather at the May 12 home opener was “the sort of day that makes a man kick himself for being too previous in moving the parlor stove out into the woodshed before the weather has finally made up its mind what it is going to do.”[fn]“Buffalo Takes the First game on the Home Grounds.” Buffalo Express, May 13, 1895.[/fn] Despite the bone chilling temperatures, about 2,500 fans jammed the grandstand and bleachers for the 3:30 game to watch their hometown heroes open the home season in Buffalo.

The left handed batting Bottenus came to the plate in the first inning against the Wilkes-Barre Coal Barons (or Miners), and promptly put the first pitch he saw from right hander Sal Campfield over the right field fence. The Buffalo Daily Courier described the home run in colorful language:

Billy Bottenus, the ex-Springfield boy, was the first at bat. He took a long look at the lanky form of Campfield and then straightened out for business. The first ball pitched seemed just right, and he let off surplus steam. Bang! went the bat against the sphere and away the leather sailed into space. Billy started for first on the trot, and right fielder Lizotte began to sprint in the direction of the fence. “Billy” took another look at the leather which was scraping the clouds, and settled down to a walk bidding the time of day to the basemen, and finally sauntering up to the plate amid the plaudits of the bleacherites The ball was ne’er seen again.[fn]“Yesterday’s Games,” Buffalo Daily Courier, May 13, 1895.[/fn]

Buffalo scratched out another run off Campfield and finished the first inning with a 2-0 lead.

In the second inning, Bisons’ catcher Tommy Dowse reached on an error by Wilkes-Barre shortstop John McMahon. Ed Leewe walked, and Buffalo pitcher Joe Herndon sacrificed the runners to second and third. The fans went wild as Billy Bottenus stepped to the plate. The Buffalo Daily Courier described the scene:

Now there were cheers in plenty, for “Billy’s at the bat.” Bottenus smiled, but watched “Camp.” Again, he got one that suited, and once more the stick whizzed with terrific force against the leather. Crack! And the leather was sent in fragments the second time. The fair haired one and Dowse came home, but “Billy,” out of sheer curiosity, stopped to gaze at a bit of leather way up in the sky, as it cleared by half a mile, more or less, the houses opposite the ball park. Then he continued his trip to the rubber.[fn]Ibid.[/fn]

The Bisons weren’t done scoring in the second. Two batters after Bottenus, Buffalo right fielder John Shearon “planted another in a goose pasture a quarter mile away,” for another home run, giving Buffalo a 6-3 lead.

The Bisons weren’t all offense on this day, as they also made some spectacular plays in the field. In the bottom of the second, Buffalo catcher Tom Dowse made an amazing catch by the Wilkes-Barre bench. The Buffalo Daily Courier described the play in detail, stating that “In the second inning Tommy Dowse made one of the prettiest of catches of foul flies, Shannon knocked a high foul, which dropped close to the grand stand and on the Miners’ bench. Tommy went up and over the Diggers on the bench, and grabbed the ball in artistic fashion.”[fn]Ibid.[/fn] The Buffalo Enquirer said that “Probably no finer catch has ever been made on a ball field than that made by Tommy Dowse.”[fn]“Bully Boy Bottenus,” Buffalo Enquirer, May 13, 1895.[/fn] Despite the tremendous defensive play, the Coal Barons joined in the scoring, putting up four runs in the second inning, including a home run by center fielder Fred Betts. At the end of the second Wilkes-Barre led Buffalo 7-6.

Things weren’t getting any easier for Wilkes-Barre pitcher Sal Campfield as the game went on. In the top of the third inning, Bisons’ third baseman Jake Drauby led off with a single. Billy Clymer then reached on an error by shortstop John McMahon. After Tom Dowse grounded out to short, Buffalo shortstop Ed Leewe doubled home both runners, giving the Bisons an 8-7 lead. Pitcher Joe Herndon flew out to right field, which brought Billy Bottenus to the plate for the third time in the first three innings. The result was the same as his first two at bats, as the Buffalo Daily Courier described:

“Hurrah! Here’s Billy again,” shouted the bleachers en-masse, as Bottenus stepped up. On the second strike, he let out, and for the third time the hide covered sphere went sailing over the fence and into space. Billy chased himself home amidst a tumult of applause and modestly took his seat after being congratulated on all sides. But the circus now stopped for Fields flied out to Lezotte.[fn]“Yesterday’s Games,” Buffalo Daily Courier, May 13, 1895.[/fn]

That made three home runs in the first three innings of the home season for Bottenus. It’s obvious that the Courier described all three blasts with great hyperbole, but the Buffalo Enquirer, supported the Courier’s claims that Bottenus’ homers were crushed, saying “It can be imagined with what velocity these balls flew through the air, when it was said that his third homer went over the large two-story and a-half house fully 40 feet from the right field fence.”[fn]“Bully Boy Bottenus,” Buffalo Enquirer, May 13, 1895.[/fn]

Bottenus did not bat in the fourth inning. In the fifth inning, he came to bat with two on and one out. The Buffalo Daily Courier stated that “Bottenus was due, but home runs had been exhausted from his bat, and the best he could do was to send a sizzling grounder between center and left field. It brought Tommy home and the Kid went to third.” Bottenus ended up at second base with a double. Through four innings, Bottenus was 4-4, with three home runs and a double.

Wilkes-Barre rallied in the top of the fifth, when two walks and a hit batsman loaded the bases for second baseman Dan Shannon. The Buffalo Daily Courier reported that “Shannon got a ball that suited him, and giving it a vicious rap, sent the sphere out into the cold, cold world, and the three men on bases into safety.”[fn]“Yesterday’s Games,” Buffalo Daily Courier, May 13, 1895.[/fn] The grand slam cut Buffalo’s lead to 12-11.

In the top of the seventh, after pitcher Joe Herndon was hit by a pitch, Billy Bottenus stepped to the plate looking for his fourth home run of the day. The Buffalo Daily Courier reported:

“Billy” Bottenus came up refreshed, and in obedience to repeated cries for a homer, cheerfully rapped out a ripsnorter that left a streak of smoke in its wake. Of course it went over the fence, and Herndon paraded home, while “Billy” stopped to chat with Trilby, Shannon, McMahon, and Smith before continuing his journey.[fn]Ibid.[/fn]

In the bottom of the seventh, the Miners scored two more runs, one of which came on a home run by pitcher Sal Campfield. At the end of the inning, the umpire and crowd had finally had enough of the cold. The Buffalo Courier wrote “As the weather was so bitter cold, and Umpire Doescher half frozen, he called the game at the end of the seventh inning, and 2,500 delighted fans made a rush for the street cars.”[fn]Ibid.[/fn] Buffalo won the shortened game 18-13. 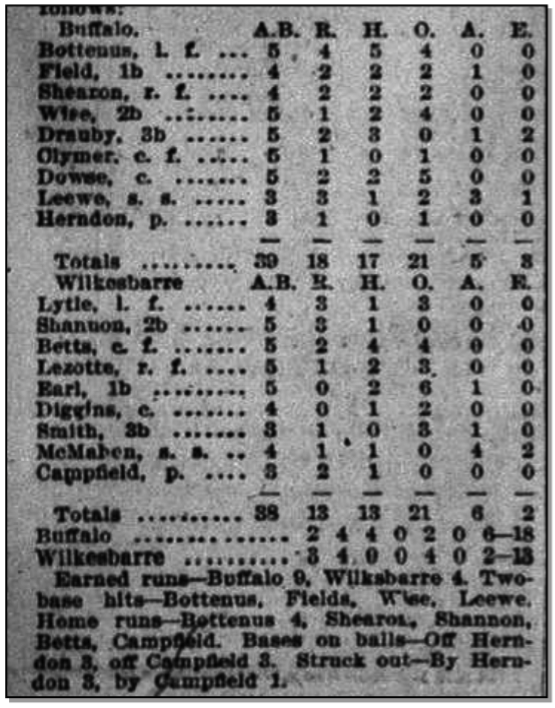 Buffalo and Wilkes-Barre combined for eight home runs in the May 12 game, four by Bottenus, one by Buffalo right fielder John Shearon, and one each by Wilkes-Barre’s Dan Shannon (a grand slam), Fred Betts, and Sal Campfield. However, the number of home runs in the game was highly unusual at the time. Home runs were rare enough during this era that the Eastern League home run leader at the end of the 1895 season was Jud Smith of Toronto with 14.[fn]Sam Thompson led the National League in 1895 with 18 home runs.[/fn] In fact, Bottenus hit just five more home runs during the 1895 season, and still finished third in the league with nine.[fn]http://www.baseball-reference.com/register/player.cgi?id=botten001wil[/fn]

The rarity of home runs at the time makes Bottenus’ four-homer performance even more remarkable. Billy Bottenus would go on to play 12 more seasons for various minor league teams, but he never made the major leagues. After playing 19 seasons of minor league ball, he stopped playing professional baseball in 1907 at the age of 42.[fn]Ibid.[/fn]

As for the Bisons, they finished the 1895 season with a 63-61 record, and a fifth place finish in the Eastern League, well behind the league-leading Springfield Maroons. Despite the team’s low finish in the standings, the home opener of 1895 will always be remembered in Buffalo baseball history. As the Buffalo Commercial Advertiser said, “It was a glorious day for the Buffalos, a glorious day for the cranks and a glorious day for Billy Bottenus.”[fn]“Four Home Runs. Billy Bottenus made a Record in the Opening Game at Franklin Park.,” Buffalo Commercial Advertiser, May 13, 1895.[/fn] In the annals of Buffalo baseball history, there may never have been a more glorious day.

BRIAN M. FRANK is a member of SABR’s Minor League Committee and he writes about the history of the Buffalo Bisons at HERDchronicles.com. Follow him on Twitter @HERDchronicles.