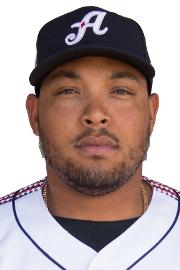 Arizona Diamondbacks prospect Yasmany Tomás became the second minor-league player this season to hit four home runs in a single game, driving in eight runs on a record-setting day for the Class AAA Reno Aces on Monday, May 20, 2019, at Greater Nevada Park in Reno, Nevada.

As Chris Tripodi writes at MiLB.com:

"Tomás started the fireworks on the first pitch he saw from Tacoma Rainiers southpaw Anthony Misiewicz in the first inning, hitting a three-run blast to right to give the Aces a 3-0 lead. ... In the third, Tomas led off the bottom of the frame with another first-pitch homer to right, then did it again on the first pitch he saw in the fifth, this time taking Christian Bergman over the center-field fence. ... [Matt] Szczur came to bat in the seventh needing a triple for the cycle and, like Tomas, jumped on the first pitch of the at-bat and went the other way for a triple to right.

"The fireworks still weren't over, however, as [Kevin] Cron ripped his 21st home run of the season over the left-field wall in the eighth to pick up his fifth and sixth RBIs of the game. Not to be outdone, Tomás homered on the very next pitch to become the only Aces batter to hit four home runs in a game and the first Pacific Coast League batter to finish the feat since [Micah Hoffpauir in] 2008."

Tomás, the 28-year-old Cuban slugger, has spent parts of three seasons at the major-league level with the Diamondbacks from 2015-17. He finished Monday's game with 17 total bases — five shy of the PCL record set by the Vernon Tigers' Pete Schneider, who hit five home runs and doubled against Salt Lake City on May 11, 1923.

The Aces hit 10 home run as a team, setting a modern franchise record for the Pacific Coast League affiliate, but not a record for Nevada's "Biggest Little City." The Reno Silver Sox of the Class C Sunset League hit 12 home runs in a single game on June 1, 1947, as Phil Alotta and Vince Pascale each hit four home runs that day against the Ontario (California) Orioles. It's the only known instance in professional baseball history where two players each hit four home runs in the same game.

There are no documented instances of a player hitting four home runs and another player hitting for the cycle in the same game in the minor leagues, but it's only happened once in MLB history: New York Yankees Hall of Famers Lou Gehrig and Tony Lazzeri achieved the feat on June 3, 1932.

Earlier this year on April 18, Will Benson of the Lake County Captains hit four home runs in a game, the first player in the Midwest League to do so since 2002.

SABR founding member Bob McConnell first published the list in The Minor League Research Journal, Vol. 2 in 1997. It was updated in his landmark book, Going for the Fences: The Minor League Home Run Record Book (2009), and is now maintained online at SABR.org.