This article was written by Steve Cardullo 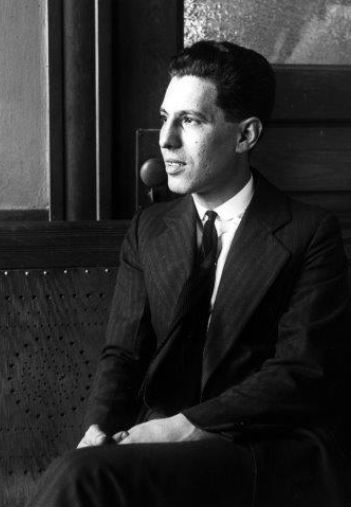 During Harry Grabiner's four-decade-long tenure as a front-office official with the Chicago White Sox, he saw the team experience its highest highs and lowest lows. Beginning his career as a scorecard salesman in 1905 and serving for many years as the team’s secretary and vice president, Grabiner was involved with the White Sox’ first two World Series championships, in 1906 and 1917, and the construction of Comiskey Park. He also helped with the planning and logistics of Charles Comiskey and John McGraw’s successful world baseball tour in 1913-14, and played a key role in the building of the White Sox’ great teams in the latter half of that decade. That team would shock the baseball world with the exposure of the Black Sox Scandal after the 1919 World Series, but Grabiner would stick around through three generations of the Comiskey family to run the White Sox’ front office. After a brief retirement, he re-emerged in Cleveland as a partner of Bill Veeck in the building of a championship contender in the 1940s.

Harry Mitchell Grabiner was born on December 26, 1890, in Chicago. He and his brother, Solomon (called Joseph), and two sisters, Sophie and Fannie, were raised by their Polish-born parents, Samuel and Hannah, just outside of the Loop. Samuel, a hardware store salesman, had emigrated in 1883 and sent for his wife and family a year later.1

In 1905 Harry met White Sox owner Charles Comiskey when he wandered into South Side Park after a rainstorm and found Comiskey working on the field to get it ready for that afternoon’s game against the Detroit Tigers. The 15-year-old Grabiner asked if he could help and Comiskey put him to work.2 Grabiner remained an employee of the White Sox for the next 40 years.

Grabiner began his long tenure with the White Sox as a scorecard salesman on a salary of $50 a month. Soon he added groundskeeping, ticket sales, and finances to his responsibilities. He had a keen eye for numbers and was quick to add up daily receipts, often in his head. That skill brought him to the attention of club secretary Charles Fredericks, Comiskey’s nephew, who mentored him in the business of baseball.3 Fredericks died in 1916 after a long illness and Grabiner, who had served as acting secretary along with Joseph O’Neill, took over the job full time at the age of 25.4 The secretary’s role was in many ways equivalent to that of a modern-day general manager. Author Gene Carney noted that “although Grabiner may have been stingier than Comiskey in negotiating contracts and running the club, it is Comiskey who has been portrayed by some as a Scrooge.”5

Grabiner was with the White Sox for their greatest triumphs in Comiskey’s reign: World Series championships in 1906 and 1917, and the opening of Comiskey Park in 1910. He recalled that despite the team finishing out of the first division that year, the new ballpark kept everyone busy. “Its initial capacity was 26,000,” he said, “and while it was being built, many scoffed at the idea of constructing a ballpark so large. In that first year, there were many days when the new park wasn’t large enough.”6

Grabiner also played an instrumental role in the 1913-14 world baseball tour led by Comiskey and New York Giants manager John McGraw with a select group of major-league players. Although he did not accompany the teams overseas, Grabiner and his new bride, Dorothy, enjoyed a trip to San Francisco and up the West Coast to Vancouver, British Columbia, as he helped make final preparations for the teams to set sail across the Pacific in the fall of 1913.7 The tour, during which games were played in Asia, Australia, India, Africa, and Europe, captured the imagination of many fans across the globe.

Dorothy Grabiner, born Sophia Maistrovich to Austrian parents who immigrated to America around 1895,8 became friends with many Chicago socialites, including Eleanor Twitchell, who later married Lou Gehrig. Eleanor drove Dorothy and her sister Mary — married to Harry’s brother, Joe (known to be a prominent gangster in Chicago) — around town on sightseeing and shopping trips or to attend a game at Comiskey Park.9

Harry and Dorothy’s daughter, June, was born in 1914. Through the help of comedian Joe E. Brown, she signed a film contract with Paramount Pictures in 1935 and enjoyed a brief but memorable career as a Hollywood actress under the stage name June Travis.10 Brown’s son, Joe L. Brown, later got his start in baseball through Harry Grabiner and served as general manager of the Pittsburgh Pirates for more than 20 seasons, leading the team to two World Series championships.

By 1916, with the addition of stars like Shoeless Joe Jackson and Eddie Collins, Comiskey and Grabiner had put together a White Sox team that could compete with any in the American League. The White Sox finished in second place, two games behind the Boston Red Sox, for the American League pennant but they came out on top the next year and defeated John McGraw’s New York Giants in six games to win their second World Series.

After a forgettable war-shortened season in 1918, the White Sox seemed poised to return to glory in 1919 and for years to come. The Black Sox Scandal put an end to those thoughts. While the story of the fixing of the 1919 World Series has been told many times, Harry Grabiner’s role in the story remains a bit of a mystery.

After the White Sox lost the World Series in eight games to the Cincinnati Reds, rumors swirled that the Series had not been played on the level. Comiskey launched a private investigation of the suspected players (Eddie Cicotte, Lefty Williams, Joe Jackson, Happy Felsch, Chick Gandil, Swede Risberg, Buck Weaver, and Fred McMullin) during the offseason. Publicly, Comiskey offered a $10,000 reward for evidence that the Series had been fixed.11 In the meantime, he directed Grabiner to offer contracts to the returning players for the 1920 season.

Grabiner kept a private journal with notes on the investigation and on the status of contract negotiations with the players.12 During the offseason, he traveled to Savannah, Georgia, the winter home of Joe Jackson, to sign the star outfielder. This trip would later become a focal point during Jackson’s back-pay lawsuit against the White Sox after he was banned from baseball. Jackson claimed that he attempted to contact Comiskey after the World Series in order to return the $5,000 he had received from gamblers, but that Grabiner told him to keep the money.13 Comiskey and Grabiner both denied having any knowledge of the World Series fix. Whatever conversation Jackson and Grabiner had in Savannah about the tainted World Series will probably never be known. In any case, Grabiner offered Jackson a three-year contract for $8,000 per season, a 33 percent raise over what he had been making in 1919.14 Some of the other Black Sox players got raises, too, and the pennant-winning team returned mostly intact for the 1920 season.

While the Black Sox Scandal was still unknown to the public, baseball’s top officials, including Comiskey and Grabiner, were working hard behind the scenes to influence the game’s structure of power. The threeman National Commission, led by American League President Ban Johnson, had become ineffective, and a plan was hatched to hire a single commissioner to rule over the sport. Johnson and Comiskey, once close friends, were now feuding and Grabiner tried to help ensure that Johnson did not get the job as commissioner. Instead, it went to federal judge Kenesaw Mountain Landis.

Comiskey’s support, however, did not stop Landis from breaking up his great team when the dust settled in the Black Sox Scandal. Although the eight Chicago players were acquitted in a jury trial that most observers considered to be a farce, Landis banned them all for life in August 1921. Without Jackson, Cicotte, and the others, the White Sox fell to seventh place. They remained in the second division for nearly two decades and, by all accounts, Comiskey remained devastated by the scandal for the rest of his life.

Charles Comiskey died in 1931 and his son, J. Louis Comiskey, inherited the team. Lou was not a baseball man as his father had been, and he relied heavily on Grabiner to run the overall operation, both on the baseball side and the business side. Grabiner had overseen the renovation of Comiskey Park into a double-decker stadium in 1927 and, while the team was still struggling overall, he had acquired stars like Ted Lyons, Luke Appling, Zeke Bonura, and Jimmy Dykes. But long-suffering White Sox fans began to criticize Grabiner as the losses mounted. As Baseball Digest later reported, “Grabiner was blasphemed by the fans and players, criticized by the press, and generally blamed for inefficacies which were not of his own doing. Yet he struggled doggedly against the great odds until he fled the scene.”15

When Lou Comiskey, who was in poor health for most of his life, died in 1939, he instructed in his will that Grabiner remain in charge of the team with a 10-year guaranteed contract at a minimum salary of $25,000 a year.16 Grabiner did not stick around that long, resigning after the 1945 season because of his own poor health. His tenure with the White Sox lasted 41 years, spanning three generations of the Comiskey family.

Harry was not comfortable in retirement. In early 1946 he got a call from his friend Bill Veeck, the former Chicago Cubs executive and marketing wizard who was itching to get back into the game. The two had worked together to schedule exhibition games between the White Sox and Cubs, and like Charles Fredericks many decades before, Veeck was amazed at Grabiner’s business acumen.17 Veeck selected Grabiner to be his vice president when he bought the Cleveland Indians in June 1946, calling him “the smartest man I ever met in baseball.”18 Although many of baseball’s old guard hoped Grabiner’s conservative nature would help curtail some of Veeck’s crazier stunts, the two got along supremely well. Grabiner later said, “Every day of my association with him in the operation of the Cleveland club has been a thrilling experience.… And what a joke has been turned on those who said I was in the setup to throw ice water on Bill’s exuberance.”19

Grabiner served as a valuable resource in the Indians front office. He had a hand in the bold July 1947 signing of Negro Leagues star Larry Doby, breaking the color line in the American League just three months after Jackie Robinson made his debut for the Brooklyn Dodgers in the National League. The following year, the Indians signed the most famous and talented African-American pitcher in the country, Satchel Paige, on their way to the AL pennant — their first since 1920, when the exposure of the Black Sox Scandal kept Grabiner’s White Sox from winning again.

Before the Indians clinched the 1948 pennant, however, Grabiner suffered a serious stroke, collapsing in his office at Cleveland’s Municipal Stadium. He was taken to his summer home in Allegan, Michigan, to recover but he never came out of a coma. Less than two weeks after the Indians defeated the Boston Braves to win the World Series, and two days after undergoing an operation to relieve pressure on his brain, the 57-year-old Grabiner died on October 24, 1948.

Grabiner is buried in Chicago’s Rosehill Cemetery. At the time of his death, he ranked third in seniority among executives in the American League behind Connie Mack of the Philadelphia Athletics and Clark Griffith of the Washington Senators. His funeral was attended by dozens of baseball leading officials and former players, including Commissioner A.B. “Happy” Chandler, league presidents William Harridge and Ford Frick, and Charles A. Comiskey II, the White Sox secretary and the grandson of his old boss and friend.