This article was written by Joanne Hulbert

Crank: a baseball fan in the late 19th century. “The real, simon-pure baseball crank … thinks baseball, talks baseball, dreams baseball and, does all but play it. It is generally a fact that the real baseball crank cannot play right-field in even a ‘scrub nine.’” — Milwaukee Sentinel, October 12, 1884 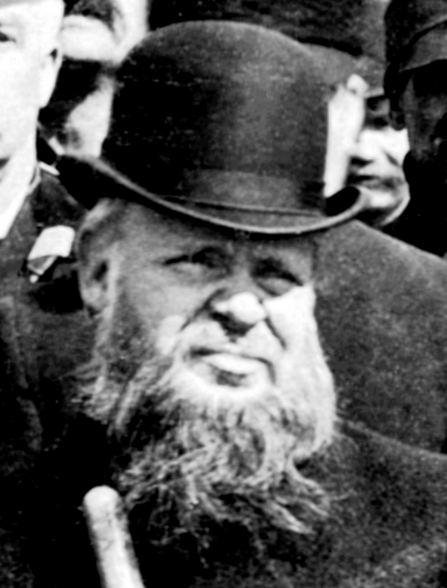 They were there in all the cities; all the teams had at least a couple of them. New York had several, some of them from the theatrical crowd. There was De Wolf Hopper of “Casey at the Bat” fame, and his friend, fellow actor Digby Bell. The comedian Henry Dixey, born in Boston, strongly believed that life was a game, while baseball was very serious. Actress Helen Dauvray, creator of the Dauvray Cup in 1887, was so smitten with baseball that she married John Montgomery Ward, proving that not only had she a passionate love of the New York Giants, but she also kept a player for herself – for a while anyway, until their divorce in 1893.

But there was one baseball crank in America whom baseball writer Hugh Fullerton in 1915 called the greatest of them all, a man who preceded the Royal Rooters and Nuf Ced McGreevey and all the others in Boston’s sports history, and set the bar high for his 20th-century successors. His name was Arthur Dixwell. He left his mark on baseball history, even if he is not easily recalled today. Besides being considered the greatest baseball crank of them all, he was a director of Boston’s Players League club in 1890. He showered his favorite players with gifts of cigars for all when the team won, diamond scarf pins, recliner chairs, loans that often were never paid back, and even an invitation of a European tour to catcher Morgan Murphy. His Dixwell trophy was awarded to the New England League pennant winner. He turned over the ceremonial first shovel of dirt for construction of the Huntington Avenue Grounds when the American League settled into Boston as the new team, threw out the first ball at the first game played there on May 8, 1901, and sent Ban Johnson $100 for season tickets that first year. After the 1903 World’s Series win, he presented the Boston club with a lavishly designed pennant flag. And then he virtually disappeared.

Few remember Arthur Dixwell today. His name crops up only fleetingly; a mere mention of his name is all there is in most books about Boston sports. He never occupied a position on any baseball team, yet his impact left an indelible mark on the city’s sports history during the 1890s. Born on August 6, 1853, into a prominent Boston family, he was the son of John James Dixwell, a banker who died when Arthur was a young man, leaving him with a comfortable trust fund – $10,000 annually, and an additional $10,000 if he maintained any sort of useful employment.1 He was the grandson of Nathaniel Bowditch, famed author of The New American Practical Navigator, considered the best treatise on navigation ever written. Arthur was a cousin of Fanny Dixwell, wife of Supreme Court Justice Oliver Wendell Holmes, Jr. His upper-class connections served him well when he navigated Boston’s Brahmin society.

In an 1889 interview with the San Francisco Examiner, Dixwell explained, “I never played a game of ball in my life. Once they put me out in right field on the Common. You know in those days if you couldn’t play they put you in right field. There was one ball knocked out my way in the first part of the game, and I disgraced myself by running away from it. That settled my career as a ball player. But I’ve been a crank for many years. Last season I missed but one championship game played by the Bostons.”2

That settled Arthur into a permanent position in the grandstand. There he found fame, fortune, and notoriety for his signature yell, “Hi! Hi!” That was his way, he explained, of expressing his appreciation of a good play. He did not consider it too noisy, not half as bad, he maintained, as some other cranks had in giving expression to their feelings. Dixwell was celebrated in 1890 with a song and chorus dedicated to him and the Players League, words by Charles Sleeper and music by J.W. Wheeler, titled “Hi! Hi!” and published in the Boston Globe.

Dixwell honored his father’s wish that he in some way earn a living to supplement his trust-fund allowance. Dixwell’s Art Furniture Store, 4 Park Street [a/k/a Arthur Dixwell’s Art Parlor] , opened after his father’s death in 1876, but the enterprise went bust in 1884. He reopened at 175 Tremont Street as the agent for Marks’ Adjustable Chair, an early version of a recliner, and it became a gift he often gave to baseball players.

By 1889 Dixwell abandoned forever all his business interests and devoted himself full-time to baseball. He could be found at every game, scorecard in hand and punctuating the air whenever a good play was made with a shrill chorus of “Hi Hi’s!” He traveled with the team during spring training and to all the league games as far away as Chicago. When out of town, he had the results of all the league games cabled to him. He always kept score and was never so distracted that he failed to record a play. Scoring became his field of expertise. He kept impeccable records of the players, including height, age, average ability, color, race (nationality), and “previous condition of baseball servitude of every professional player”3 – information he found useful as a director of the Boston Players League team. He was a sabrmetrician long before there was such a thing.

He became known as “Hi Hi” Dixwell, and eventually assumed the title “General,” although he never served in the military. The title was bestowed on Dixwell for the General Petition, a request for season tickets that he sent to Boston’s National League owners – a request they declined. Perhaps it was the controversy over the season-ticket issue or an opportunity he could not pass up, but when the Brotherhood of Base Ball Players was organized, General Hi Hi Dixwell was at the front of the line to support the new Players League league team in Boston with “Hi Hi’s” and his bankroll. Elected a director, he set out to attract the best players his money could buy. He offered John Clarkson $6,000 to join the Brotherhood in Boston, but Clarkson told him that was not enough money and negotiations ceased.4

At a game in Buffalo in 1890, Dixwell’s hi-hi-ing got him into trouble when a police officer demanded,“You’ll have to stop that noise here or else go out on the bleaching boards.”

“Well, I’ve made the noise 130 times before this year and I don’t believe I’ll stop it now,” the General replied with a scornful smile, and asked whether his cheering was likely to keep the policeman awake on his beat. Several fans in the crowd sympathized with the General and started up a solid defense with a chorus of “hi hi’s” that sent the defeated officer away.5

The Brotherhood and the Players League were gone in 1891. Dixwell stood by the players and had been persuaded to invest a large sum of money which he expected to lose. He had also invested in Boston’s American Association club, but the only return he would foresee from that would be a few good games to exercise his “hi-hi’s.” The Boston Reds won the AA pennant in 1891, the Association considered a major league of the day. With regret Dixwell returned to the games at the South End Grounds, but it wasn’t the same. He was seen less often at the ball grounds and Hugh Fullerton reported that Dixwell’s devotion to the National League team was damaged by feeling he had been insulted by some of the players.

He pursued other interests – was founder and president of the Boston Bowling Club, started a bowling team that sported fashionable gray uniforms with close-fitting caps, and kept bowling records as meticulous as his baseball scorecards. The Dixwell team included ex-Commodore Charles F. Morrill of the South Boston Yacht Club and George L. Whitney, an African-American waiter whom Dixwell was acquainted with by way of the private clubs he frequented. He was also highly devoted to the theater and attended all 160 performances of the play Peggy from Paris, and was disappointed when he was unable to see all 200 performances of Yankee Consul. He always purchased two tickets, attended all engagements alone, and reserved the second seat for his hat. He prevailed upon the orchestra to move the bassoonist to the other end of the pit, far away from his seat in the front row as the noise, ironically, highly displeased him.

In September 1899 Dixwell endured an embarrassing lawsuit filed by the wife of George L. Whitney, his waiter friend. She accused Dixwell of alienating the affections of her husband. The Boston newspapers kept the story subdued on a back page in the Friday evening edition, and requests for more information by probing reporters were turned down. “You wouldn’t publish it if you knew all the facts, and I won’t give them to you,” declared Mrs. Whitney’s lawyer.6 She wanted $10,000 in damages, but the lawsuit was eventually dropped. Mr. Whitney simply wanted a divorce.

The only known photograph of Dixwell was taken at the March 7, 1901, ceremonial turning of the first shovelful of dirt for the new Huntington Avenue Grounds for Boston’s new American League team. He was a diminutive figure, surrounded by much taller Royal Rooters, and standing next to 6-foot-2-inch former pitcher and State Senator Michael J. Sullivan. Other clues about Dixwell’s physical attributes can be gleaned from his 1872 passport application, which described him as 5-feet-4½-inches tall, with a high forehead, gray eyes, regular nose, medium mouth, round chin, brown hair, light complexion, and oval face. In other accounts, he was described as having “victorious blue eyes, a flood of wavy golden whiskers, attired in fancy-colored vests and looking like a Merovingian prince, too magnificent to be ill-natured and enjoying the most agreeable relationship with himself.”7

But the Prince of Cranks no longer graced the sports pages after the 1903 season. The Royal Rooters dominated the scene from then on and General Hi Hi Dixwell faded away. Although he was reported to be dead in Everybody’s Magazine in 1907, that was a Hi Hi-ly premature declaration. Dixwell survived until September 16, 1924, and died in virtual obscurity in his apartment at the Copley Square Hotel. Boston has had its share of cranks, rooters and fanaticals, but they would not ever see again another like General “Hi Hi” Dixwell. He’s buried at Mount Auburn Cemetery among his siblings, his parents, and many of his distinguished ancestors.

This biography can be found in "New Century, New Team: The 1901 Boston Americans" (SABR, 2013), edited by Bill Nowlin. To order the book, click here.

1 Dixwell’s gravestone shows his year of birth as 1854 but City of Boston birth records and a couple of his passport applications agree on the year as 1853.