This article was written by Scott McClellan 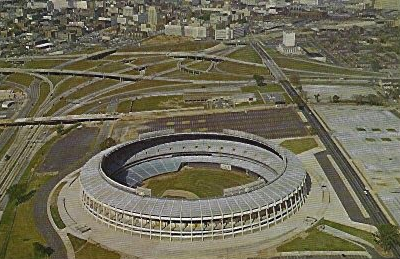 From its beginning as a plank in Ivan Allen’s campaign platform for mayor, to its end, hosting the Olympic baseball competition and a World Series in its final year of existence, Atlanta Stadium1 was a major part of the push to make Atlanta a world-class city. The stadium succeeded in attracting teams from major league baseball, the NFL, and even the North American Soccer League. But the teams left, one by one, until Atlanta Stadium was demolished on August 2, 1997, to make room for a parking lot to serve Turner Field, the Braves’ new home.

Soon after Allen’s 1962 inauguration, Atlanta Journal sports editor Furman Bisher told him that Kansas City A’s owner Charlie Finley was coming to Atlanta to look at stadium sites. Allen and Bisher showed Finley four sites; when he saw the last, at the junction of I-75/85 and I-20 a mile south of downtown, he told them “This is the greatest site for a stadium I’ve ever seen. If you build it, I’ll bring the Athletics here as soon as it’s finished.”2 The American League declined to approve Finley’s proposed move, but when the Milwaukee Braves were induced to move to Atlanta instead, plans for the stadium swiftly took shape.

Having developed a strong friendship with local architect and civic leader Cecil Alexander, Mayor Allen wanted Alexander’s firm to design the facility. The head of the stadium authority preferred another firm, so the architects were compelled to form a joint venture, Finch-Heery Architects, which went on to design many other ballparks. Alexander did on-site research at Yankee Stadium, Shea Stadium, Busch Stadium and RFK Stadium. He gave his notes to his partner Bill Finch, 3 who designed a circular stadium 325 feet down the lines and 402 feet to center field, built in 51 weeks at a cost of $18 million. 4

The city of Milwaukee filed an anti-trust suit against the Braves which postponed their move for a year, so Atlanta-Fulton County Stadium was used to host the last season of the International League’s Atlanta Crackers in 1965. For the 1966 season the Braves opted to proceed with the move despite the lawsuit, which was eventually decided in favor of the team. 5 The Atlanta Braves debuted in their new home with a night game on Tuesday, April 12, 1966, before a capacity crowd of 51,500 fans6, losing 3-2 to the Pittsburgh Pirates. Joe Torre hit the first major-league home run in the park, and added another in the bottom of the thirteenth, accounting for all the Atlanta runs in the inaugural game. 7 This game was just the beginning of a trend of losing baseball that continued, mostly unabated, until the 1991 season saw the first of fourteen consecutive division titles.8

The stadium is probably best known as the site of Hank Aaron’s 715th home run, launched into the Braves’ bullpen behind the left-field fence on April 8, 1974. As Aaron circled the bases, the team’s Native American mascot, “Chief Noc-a-homa,” emerged from his tepee in the left-field stands to celebrate the home run with his customary war dance. 9 After the franchise move brought Aaron to Atlanta, he changed his stance, moving his hands closer to his body. 10 He made himself into a pull hitter, and became one of the few hitters to see his home run totals increase after the age of 35, helped by the 1,050-foot elevation of a new home park that became known as “The Launching Pad.” 11 The stadium seems to have left its mark on the Braves, who have continued to base their offense around the home run even after moving into more pitcher-friendly Turner Field in 1997.

After Ted Turner purchased the Braves in 1976, Atlanta Stadium hosted weddings at home plate12, Fourth of July fireworks, and ostrich races around the warning track in an attempt to boost dwindling attendance. The ostriches weren’t always confined to the warning track: Broadcaster Skip Caray recalled steering his bird directly from center field to home plate to steal a win. 13 Nor were the fireworks necessarily confined to July Fourth; the 1985 fireworks show started at 4:01 A.M. on July 5 after a 19-inning defeat 14 and caused many of the stadium’s neighbors, awakened by the noise, to fear that the area around the park had become a war zone. The City of Atlanta soon made it illegal to start fireworks shows after midnight.

Field conditions were a concern for years. It took 24 years for the City of Atlanta to transfer the responsibility for maintaining the playing surface from its municipal street crew to a full-time groundskeeper.15 When John Schuerholz became Braves’ general manager in 1990, Ed Mangan came with him from Kansas City and greatly improved the playing surface.

The teams that took the field also improved greatly under Schuerholz, and when Marquis Grissom caught a fly ball to complete a one-hitter by Tom Glavine and Mark Wohlers on October 28, 1995, the stadium finally had a World Series champion. 16

By then the Braves were already looking forward to taking over an Olympic Stadium reconfigured for baseball after the 1996 season.17 And as this is written in mid-2015, the Braves are planning to move to Atlanta’s northern suburbs for the 2017 season.18 Given the truncated life spans of Atlanta Stadium and Turner Field, it seems that it’s not only ballplayers who have short careers now, but also the parks in which they play.

8 The Braves finished eight games over .500 in 1966 and won NL West divisional titles in 1969 and 1982. They didn’t win a divisional title in 1994, their first season in the realigned NL East, but no other team did, either. Labor problems ended the season after August 11 with Atlanta in second place in the division. There was no MLB postseason in 1994.

17 The reconfigured park, first used for the 1997 season, was named Turner Field in honor of long-time Braves owner Ted Turner.