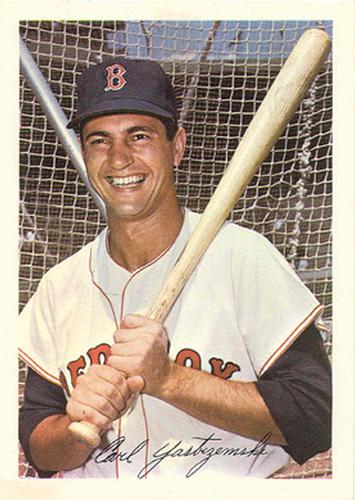 "And if I have my choice between a pennant and a triple crown, I'll take the pennant every time." — Carl Yastrzemski, Triple Crown and AL pennant winner, 1967

In 1967, Yaz wasn't just the sparkplug for the Boston Red Sox with his hitting and his fielding. He also posted some stats that no one matched for 45 years, winning the last Triple Crown in Major League Baseball until Miguel Cabrera in 2012.

Clearly, the degree of competition matters. Ty Cobb won the Triple Crown in 1909 with just nine home runs. He led the majors that year, with only Tris Speaker (7) and Red Murray (7) coming close. No one approached him in either average or RBIs. Cobb not only won the Triple Crown in his league, but in all of baseball. Being the best in both leagues is termed the Major League Triple Crown.

You'd figure that Rogers Hornsby's .401 was the best in the majors in 1922, but George Sisler hit .420 for St. Louis in the American League, and Ken Williams (also with St. Louis) led the AL in RBIs. Nonetheless, Hornsby led his own league by margins of 47 points in average, 20 runs in RBIs, and 16 homers — dramatically better than the second-place batter in each of the three areas.

1933 was quite a year — a Triple Crown winner in each league! Even more remarkably, both played for Philadelphia teams — Jimmie Foxx for the Athletics and Chuck Klein for the Phillies. Foxx won the AL by 20 points in average, 14 homers, and 24 RBIs, but Klein was clearly better in batting average.

The very next year, there was another Major League Triple Crown winner — Lou Gehrig of the New York Yankees. Gehrig had healthy margins in HRs and RBIs, but he was just one percentage point above Paul Waner's .362 average. Nonetheless, Gehrig accomplished something Babe Ruth never did — for that matter, think of the many great hitters baseball has seen and realize the many who never won the Triple Crown: Willie Mays, Ruth, and Stan Musial among them. The list is a long one, but those three names alone provide another indication of how rare a feat winning the Triple Crown truly is.

The last National Leaguer to win the Triple Crown was Joe Medwick, who won it in 1937. Medwick tied with Mel Ott in the home run race, but hit 10 points above Johnny Mize in average and drove in a full 41 more runs than the #2 man in the NL. Joe DiMaggio hit 46 homers and Hank Greenberg drove in 183 runs, but Medwick topped his own league in all three Triple Crown categories.

After three years of military service, and a serious elbow injury that might well have cost the Red Sox the 1946 World Series, Williams won the Triple Crown once again in 1947. In no category did he lead the majors, but against the competition in the American League, no one was better. He hit 15 points higher in average, hit three more home runs, and drove in 16 more runs than any other batter.

Williams and Hornsby are the only two players to ever win the Triple Crown twice — and Ted very nearly won it a third time in 1949. Ted hit four more homers than teammate Vern Stephens, the #2 American Leaguer. He drove in the exact same number of runs as Stephens, leading the league in RBIs albeit tied. But he lost the batting title to George Kell, even though both are shown with .343 averages. Kell's was .3429118 and Williams' was .3427561. That's a difference of .0001557, one ten-thousandth of a point. The slightest mistake in the calculations (a walk mistakenly listed as an at-bat) and the balance shifts. And Ted walked 162 times in 1947; Kell walked 61 times. Ted reached base via hit or walk 356 times. Kell reached base 240 times. Ted's on-base percentage was .490 to Kell's .424.

Mickey Mantle took the Triple Crown in 1956, the last time any player has won the Major League Triple Crown. He outhit Ted Williams by eight points in average, but he hit 45 points more than Hank Aaron in the National League. His margin in homers was nine and in RBIs was 21.

Ten years later, Frank Robinson won handily against his AL peers, though Aaron drove in more runs in the NL and both Alou brothers hit for higher averages in the senior circuit.

Then came 1967, just a year later. Yaz had his sights set on it before the season began. Red Sox third base coach Eddie Popowski told Steve Cady of the New York Times in 1983, "He told me in spring training that year he thought he had a shot at it. He said, 'It's going to be great when every hit means something, when every putout means something.'"1 Yaz beat out Robinson for the AL batting total .326 to .311, and hit even more home runs than Aaron (44 to 39), though he tied for the home run lead with Harmon Killebrew. Yaz's 121 RBIs topped Killebrew's 113, and was 10 above NL champion Orlando Cepeda. He didn't win the Major League Triple Crown, though, because the National League had a lot of very hot hitters. Roberto Clemente hit .357 to lead the league, and there were four other National Leaguers who hit for higher averages than did Yaz: Tony Gonzalez (.339), Matty Alou (.338), Curt Flood (.335), and Rusty Staub (.333.) Against the competition that really counts, to get your team to the World Series, Yastrzemski led his league.

Yastrzemski also led the American League in runs scored, hits, total bases, runs produced, on-base percentage, slugging average, and a number of more sophisticated statistical categories. It was very definitely a very good year. Yaz also won batting titles in 1963 and 1968, but 1967 was the only year he led the league in either home runs or RBIs. It made a great deal of difference in the year of the Impossible Dream. Accompanied by any number of stellar and timely defensive gems, 1967 will long be remembered as the Year of Yaz.

BILL NOWLIN was one of the first fans to the mound when Jim Lonborg induced the final out and the Red Sox won the 1967 pennant. He was elected as SABR's Vice President in 2004 and re-elected for five more terms before stepping down in 2016, when he was elected as a Director. He is also the author of dozens of books on the Red Sox or Red Sox players, including "Ted Williams At War" and "Love That Dirty Water: The Standells and the Improbable Victory Anthem of the Boston Red Sox" (both from Rounder Books.) He has written Johnny Pesky's biography (Mr. Red Sox) and co-edited a series of Red Sox "team books" written by numerous SABR authors that focus on different years when the Red Sox fielded exceptional teams, including: '"75: The Red Sox Team that Saved Baseball" (2005); "The 1967 Impossible Dream Red Sox" (2007); "When Boston Had The Babe: The 1918 Red Sox" (2008); and "Lefty, Double-X, and The Kid: The 1939 Red Sox, a Team in Transition" (2009). He is also co-founder of Rounder Records of Cambridge, Massachusetts. He's traveled to more than 100 countries, but says there's no place like Fenway Park.