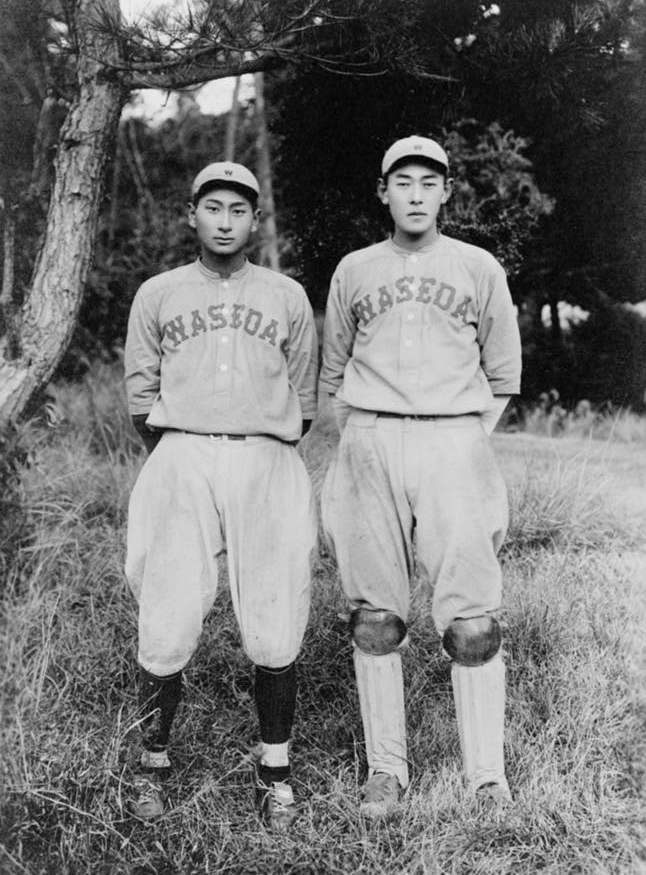 Two players from the Waseda University baseball team from Japan, catcher J. Nagano and second baseman J. Kuji, pose for a photo in 1921. (LIBRARY OF CONGRESS)

In 1921 baseball grew in popularity in Japan. More amateur players engaged in the sport within the country, and American teams traveled to Japan for games. Japanese baseball teams also traveled to the United States and its territories to take part in international competitions. Opponents for these American / Japanese matches came from universities, Japanese-American teams, and a semipro team composed of members of the Squamish Native American tribe.

That year found 207 schools competing for the 17 spots available in the 7th National High School Baseball Championship held at Koshien. The championship game found the Wakayama Central High School making their first of what would prove to be three consecutive trips to the championship game. They defeated Kyoto Number One High School by a score of 16-4. The Four Universities League took a step towards becoming the Tokyo Big6 Baseball League of today with the addition of Rikkyo University. February of 1921 saw the formation the Tenshou Baseball Club, at the time a collection of amateurs but who in two years would become the second professional club in the island nation.

On August 6, 1921, players from the Squamish Nation of Kitsap County in the Puget Sound area of Washington left American soil aboard a ship named Alabama Marou for a two-week journey to Yokohama, Japan. The trip was promoted by sporting goods company Spalding, who chose the team after trying out “practically every Indian ball team on the coast.”1 They were not the only team making the trip, as a Northwest All Star semipro team as well the University of Washington club were also on board. The team performed well in Japan, winning nearly all their games against opponents ranging from high school teams to semipro All Stars and even some tourists.2 The Squamish team ran into problems, though, off the field; they lost all 13 dozen balls Spalding supplied them with while conducting batting practice on the ship’s deck during the trans-Pacific journey, and the representative in charge of finances disappeared early in the trip leaving the squad broke. Finally, the tribe had to rely upon the American consulate to arrange their voyage home.

As mentioned, this was not the only interaction between Japanese and American teams in 1921. Some others include: