This article was originally published in the 1987 SABR Baseball Research Journal. 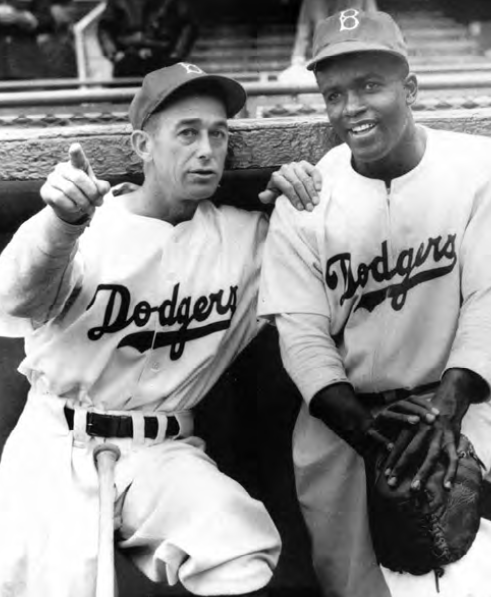 Who managed the Dodgers in Jackie Robinson’s first game? Sukeforth did. And the second too, he will tell you. In fact, at 86, Sukeforth is a fount of anecdote and opinion.

On April 15, 1947, Jack Roosevelt Robinson stepped onto the diamond at Ebbets Field in Brooklyn, New York, took his position at first base, and became the first black this century to play major-league baseball. On April 15, 1987, marking the fortieth anniversary of his historic breakthrough, the Jackie Robinson Foundation and the Brooklyn Dodger Hall of Fame held a brief ceremony on what was once the site of Ebbets Field. At almost precisely the hour when Robinson first appeared in a Dodger uniform, several hundred people gathered on the patio of the Ebbets Field Apartments — the housing development that has been neatly tucked into the familiar four corners of the old ballpark in Brooklyn (McKeever Place, Montgomery Street, Bedford Avenue and Sullivan Place).

The ceremony unfolded on the same spot where the famed Ebbets Field scoreboard had once stood and Abe Stark’s advertisement had read: ”Hit Sign, Win Suit.” The celebrants looked out on Bedford Avenue (which by all accounts had not changed all that much), where the ”Duke of Flatbush,” Edwin Snider, had plunked nearly half of his home runs. Speeches of fond remembrance were made, Jackie Robinson Day was proclaimed in Brooklyn, and a symbolic second base with Robinson’s number 42 was presented to the people of Brooklyn. Finally the names of Robinson’s Opening Day teammates were read.

The last name, Clyde LeRoy Sukeforth, echoed through the tall apartment buildings and left in a whisper. Afterward someone asked, ”Who was Clyde Su­keforth?” Well, he was Jackie Robinson’s first big-league manager — the first man, by every account, to write Jackie’s name on a major-league lineup card. Sukeforth had been asked to manage the Dodgers on an interim basis after Leo Durocher had been suspended from baseball only four days before the season opener for associating with gamblers. For the record, his interim basis lasted one game — at least according to the Baseball Encyclopedia — in which the Dodgers defeated the Boston Braves, 5-3. But by his own account and that of Red Barber, the former Dodger broadcaster, Sukeforth managed the next day and also won. Then Burt Shotton took over as manager for the remainder of the 1947 season.

But Clyde Sukeforth was more than just a footnote to history. ”He was placed in a very difficult situation, ” says Rachel Robinson, Jackie’s widow. “And he responded like a gentleman. He befriended Jack. He understood what was going on around him. I’ll never forget him. “

A former catcher for the Cincinnati Reds and Dodgers, Sukeforth played ten seasons in three decades. His last ap­pearance as a player came in 1945 when, at the age of forty-three, he was asked by Branch Rickey to become the Dodgers’ third catcher. ”I thought things were bad because of the war,” he says. “But when Mr. Rickey asked me to bring my equipment to spring training, I thought we’d hit the bottom of the barrel. But I wound up catching a few games that season (thirteen) anyway. Never thought about my age. Felt pretty good as a matter of f act. ‘

Now at the age of eighty-six, Sukeforth — who later worked for the Dodgers as a scout, coach and manager — lives in Waldoboro, Maine. Below he describes his role in the making of American history and recalls some other memories from forty years in baseball.

See, coming from Maine, I never thought about color. Didn’t see many black people around and when I got involved in scouting for Mr. Rickey, didn’t think they were anything different than the folks I knew back home. I don’t feel I did anything special. I was just there.

I remember Opening Day back in ‘4 7 pretty well. I know there was a whole lot of fanfare and excitement goin’ on, that’s for sure. Durocher had been suspended by the Commissioner just a few days before, and that’s what all the talk was about. Mr. Rickey just told the coaching staff to decide among themselves as to who would man­age. See, I knew Mr. Rickey was bringing Shotton in. Shotton was coming out of retirement and all, and I was supposed to keep real quiet about all this. So in the meantime the coaches got together and I guess, somehow, I was chosen to be the manager. I really didn’t do anything different from what Durocher had done in spring training. Same lineup. Yes, except for Jackie. And we even had a problem there. Didn’t know where to put him.

And this’ll tell you what kind of athlete Jackie was. He’d been a shortstop in college, I believe, and had played the year before at Montreal as a second baseman. Never. really worked out at first base. Well, we had this fella [Eddie] Stanky over at second. Couldn’t really move him. [Pee Wee] Reese, [Spider] Jorgensen was the rest of the infield, so when he came out to the park for the exhibition games, we started to hit Jackie ground balls at first, you know, teach him how to make the stretch, and so forth. And he picked it up like he’d been playing there all his life. I’m not saying it was his best position, but he learned it quick. And he was more than adequate.

I’d have to say at that point that he was the most extraordinary athlete I’d seen play the game. He could’ve played any of three sports he played in college, as you know. He could’ve played pro football or basketball. He was just a great athlete. And to make his debut at first base was really something. Here was a guy who was supposed to be a second baseman and he started out over at first base. And if I remember correctly, the Dodgers didn’t move him over to second base full time until 1949. He played second a lot in 1948, but he really didn’t move there until two years after he broke in.

Anyway, I remember writing out the lineup card, didn’t think anything special of it. I just wanted to follow what Mr. Rickey and Durocher wanted. I guess I have a copy of it somewhere around. Looking back, it was a part of history, but at that point, I just wanted to get the season started before Mr. Shotton arrived. There were all sorts of photographers and newsreel cameras around home plate, all around the park. I felt the excitement. It was Opening Day and all that, but there was so much more going on.

Hard to remember, but I’m certain, yes, very certain now that I look back — in fact, I got a picture of myself with Billy Southworth at home plate — that I took the lineup card up to the plate that day, handed it to the umpires and to the Braves manager, Southworth. Nothing was said that I can remember. So much noise. That’s what I remember. I handed them the cards and walked back to the dugout. The Dodgers took the field and that was it. The season started. Simple as that. At least for me.

Some of the guys on the team did some crazy things. Things I don’t even want to talk about. Things that really embarrassed Mr. Rickey after all the work he had done. If these guys had only known how it hurt Mr. Rickey. He expected a lot from the Dodgers.

I suppose that was my claim to fame, but Red Barber tells me I’ve been cheated out of one victory. And when you’ve got 50 percent of your victories taken from you, that’s a lot [laughing]. It doesn’t much matter to me. I know we won that day and I do know that I managed the club the next day and if I’m correct we won that game also. But I’m only credited with one victory as a manager. One and oh. Perfect record. Red says I should have two.

The other thing I’m remembered for in history is old Charlie Dressen blamin’ me for sendin’ in Ralph Branca when that fellow [Bobby] Thomson hit that long 213-foot home run. Long home run, wasn’t it? I guess everyone over the age of fifteen at the time has second-guessed me or Dressen, but I know Dressen second-guessed me. I re­member it clear as a bell. I was down in the bullpen in the Polo Grounds on that day [October 3, 1951, when the New York Giants defeated the Dodgers in the rubber game of a three-game playoff to win the National League pennant]. The game was going along pretty good when Dressen gets on the phone and says he’s sendin’ down two more guys to the pen. He sent down Erskine, who had pitched the day before, and Clem Labine.

Now, you know Erskine was in no shape to go right back out there. So here comes Labine wanderin’ down there with his shoes off. Now, Labine had to have his ankles taped if he was gonna pitch. I took one look at his legs and his ankles weren’t taped. So I didn’t think he’d be ready, either. And Branca was throwin’ pretty good. He really was. So here’s Erskine nursin’ his arm, Labine is lying out in the sun getting a tan — he’s lyin’ out there — and the only guy I got is Branca. And there’s absolutely nothing wrong with him. Absolutely nothing. And I tell Dressen that. So when the time comes, in goes Branca. And I thought we’d get out of it. Next thing I know, the guy hits this pop-up — I swear it was a pop-up — that lands in the front row of the grandstand and that’s all she wrote.

Nothing much else to my career. I miss the game. I really miss scouting, looking for players. I’ve always said, what makes a great manager? Great players. What makes a great pitching coach? Three good pitchers. But you’ve got to find them first.

Say, that delicatessen on Bedford Avenue right across from center field still there? Geez, they had the best corned beef sandwiches and the best pickles. That’s something you don’t forget. That was a great place. That was Ebbets Field.