LnRiLWZpZWxke21hcmdpbi1ib3R0b206MC43NmVtfS50Yi1maWVsZC0tbGVmdHt0ZXh0LWFsaWduOmxlZnR9LnRiLWZpZWxkLS1jZW50ZXJ7dGV4dC1hbGlnbjpjZW50ZXJ9LnRiLWZpZWxkLS1yaWdodHt0ZXh0LWFsaWduOnJpZ2h0fS50Yi1maWVsZF9fc2t5cGVfcHJldmlld3twYWRkaW5nOjEwcHggMjBweDtib3JkZXItcmFkaXVzOjNweDtjb2xvcjojZmZmO2JhY2tncm91bmQ6IzAwYWZlZTtkaXNwbGF5OmlubGluZS1ibG9ja311bC5nbGlkZV9fc2xpZGVze21hcmdpbjowfQ==
LnRiLWNvbnRhaW5lciAudGItY29udGFpbmVyLWlubmVye3dpZHRoOjEwMCU7bWFyZ2luOjAgYXV0b30gLndwLWJsb2NrLXRvb2xzZXQtYmxvY2tzLWNvbnRhaW5lci50Yi1jb250YWluZXJbZGF0YS10b29sc2V0LWJsb2Nrcy1jb250YWluZXI9Ijc2YjllMTlhZWJkNzhiNDY3YjA0YzY0YWNmZTMzMTY3Il0geyBwYWRkaW5nOiAwOyB9IC50Yi1maWVsZFtkYXRhLXRvb2xzZXQtYmxvY2tzLWZpZWxkPSJlYzI4OWVkZTg1NjU3MmE3ZDFiMGI2NGE3NjFmYmIxZCJdIHsgZm9udC1zaXplOiAxNnB4O3RleHQtYWxpZ246IGxlZnQ7IH0gIC50Yi1maWVsZFtkYXRhLXRvb2xzZXQtYmxvY2tzLWZpZWxkPSJlYzI4OWVkZTg1NjU3MmE3ZDFiMGI2NGE3NjFmYmIxZCJdIGEgeyB0ZXh0LWRlY29yYXRpb246IG5vbmU7IH0gLnRiLWZpZWxkcy1hbmQtdGV4dFtkYXRhLXRvb2xzZXQtYmxvY2tzLWZpZWxkcy1hbmQtdGV4dD0iZjQ4MDk2YTNmYjE0YmUwYzdkOWRjYzkyNDc1MzBkMjAiXSB7IHBhZGRpbmctYm90dG9tOiAxMHB4OyB9IEBtZWRpYSBvbmx5IHNjcmVlbiBhbmQgKG1heC13aWR0aDogNzgxcHgpIHsgLnRiLWNvbnRhaW5lciAudGItY29udGFpbmVyLWlubmVye3dpZHRoOjEwMCU7bWFyZ2luOjAgYXV0b30gIH0gQG1lZGlhIG9ubHkgc2NyZWVuIGFuZCAobWF4LXdpZHRoOiA1OTlweCkgeyAudGItY29udGFpbmVyIC50Yi1jb250YWluZXItaW5uZXJ7d2lkdGg6MTAwJTttYXJnaW46MCBhdXRvfSAgfSA=
This article was written by Julio M. Rodriguez

This article was published in SABR’s Dominicans in the Major Leagues (2022), edited by Bill Nowlin and Julio M. Rodriguez. 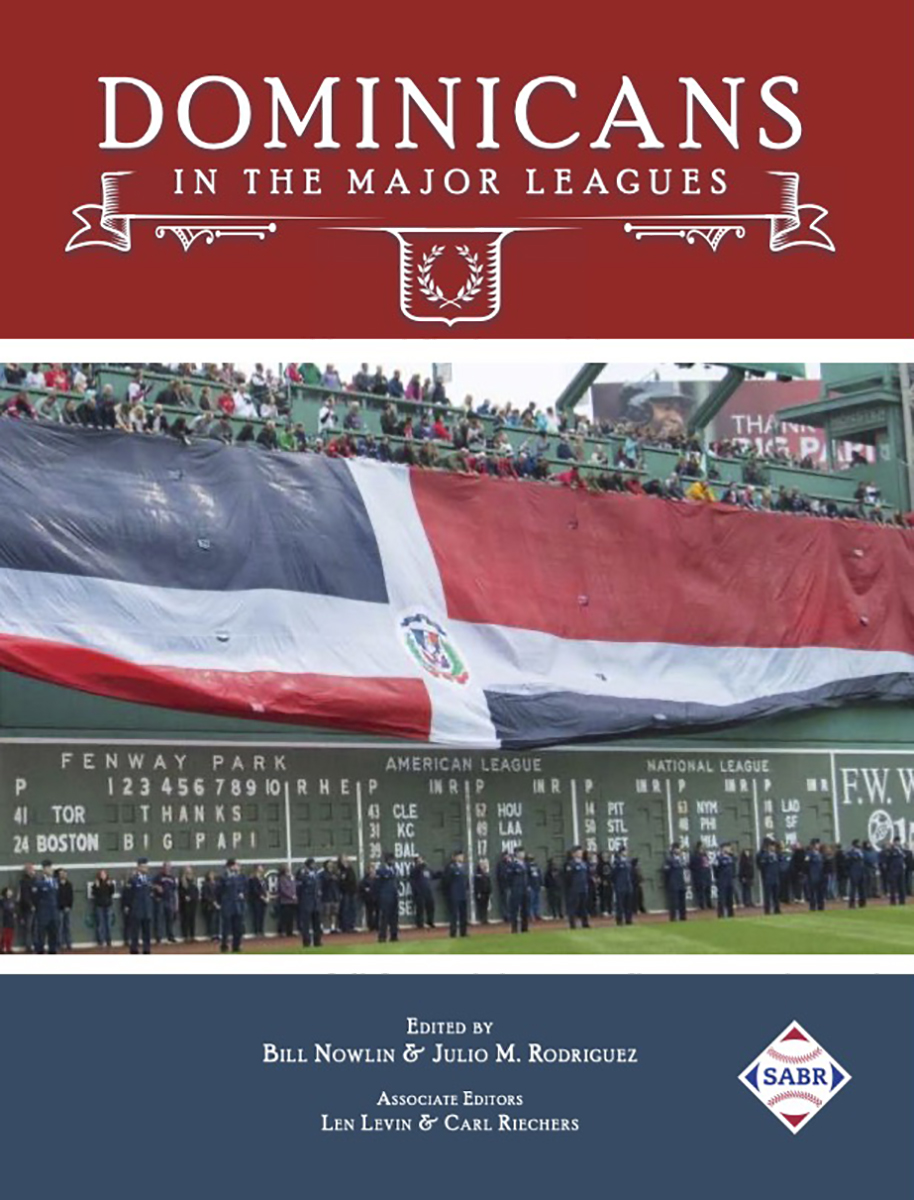 Baseball developed in the Northeastern United States in the nineteenth century and spread south, to Florida and from there to Cuba.

Dominicans liked the game and began to organize teams. In 1907 Licey was founded in Santo Domingo. In 1910 the Estrellas Orientales (Oriental Stars) were organized in San Pedro de Macorís. A number of other short-lived teams were organized over the years.

In 1911 Gimnasio Escolar, the first stadium for baseball and other sports, was built in Santo Domingo.

But the game really took off in the country during the American intervention of 1916-24.

Previous to the occupation, President Woodrow Wilson, disgusted with a revolution that took place in 1913, sent a delegate, James Mark Sullivan, to “teach Dominicans democracy.”

Arriving in Montecristi, in September of 1913, Sullivan sent this observation to Secretary of State William Jennings Bryan: “I have noticed that the Dominicans are learning to play baseball and I foresee that in not a distant future, the stars of the game will replace the revolutionary leaders in the mind of the people.”2

This was not quite so, but over time we have seen that many Dominicans turned out to become very good players.

During the years of the intervention, many games were played between Dominican teams and teams made of US Marines who came on Navy warships.

To see Dominican teams beat those American teams was one the greatest pleasures of the population during those years.

In 1917 La Primavera race track was built in Santo Domingo and, in the center of it, a baseball field was designed.

By 1922, baseball rivalry in Santo Domingo was intense. Licey was usually the usual winner of both the short series and games played on Sunday afternoons. A group of owners decided to fuse the best players of three teams into one that would play against Licey. This team was called Escogido (the chosen ones).

That year the first Dominican tournament was organized. In the scheduled 32 games, Escogido (23-9) beat Licey.

The following year, 1923, the second tournament (or series of games) could not be finished because the passion was so high that a big fight broke out on the field. This series was suspended to avoid serious and regretful consequences.

In 1924 another series was organized between Licey and Escogido, again 32 games. Licey won with a 17-15 record, winning in the last scheduled game of the tournament.

Five years later, in 1929, another tournament was also organized and Licey won again.

In September of 1930 Hurricane San Zenón destroyed both the Gimnasio Escolar and the Primavera race track.

Ginmasio Escolar was rebuilt in 1933 but was torn down in 1943 to open an avenue along Santo Domingo’s Caribbean coastline.

In 1936 a tournament was organized, this time with four teams: Licey, Escogido from Santo Domingo (already renamed Ciudad Trujillo, or Trujillo City), Estrellas Orientales from San Pedro de Macoris, and the Santiago BBC from Santiago, representing the northern region of the country. (In 1937 this team changed its name to Aguilas Cibaeñas. Estrellas Orientales won the 1936 tournament.

Then came the famous tournament of 1937.

Dictator Rafael Trujillo’s tyranny was in full swing by then and the name of Santo Domingo had been changed to Ciudad Trujillo in 1936. In order to make this name stick, Trujillo fused Licey and Escogido and called this team the Dragons of Trujillo City (Dragones de Ciudad Trujillo).

Initially in the tournament the Dragons were not doing well, so Trujillo dispatched Jose Enrique Aybar to the United States to bolster his team with the best players money could buy at that time.

The stars of the Negro Leagues were easier to contract than the ones in the white major leagues, so pretty soon the best Negro players were in Santo Domingo, not only with Trujillo’s club, but in the other two as well. Their owners had, in response, also launched an economic effort to compete with Trujillo’s ballclub.

Because of the drainage of its best players the Negro Leagues in the United Sates did not finish the series that year.

Trujillo’s club finally won the championship, but the effort left the pride of the sportsmen hurt and their pockets empty, so baseball languished for the next 14 years. It was not until 1951 that the next tournament could be organized.

In 1944 another race track was built in Santo Domingo, the Perla Antillana, and as in the Primavera track, a baseball field was designed inside the track. Games were played there and in other parts of the country, but tournaments were short and without players from foreign countries participating.

In 1946 a stadium was built for the high school of Santo Domingo and was called El Estadio de la Normal, where Licey and Escogido played their games from 1951 to 1954.

In 1950 Dominicans won an international amateur baseball competition in Nicaragua and the enthusiasm for baseball was so high that in 1951 series began in the summer with foreign players rising the quality of the game. These summer series were played for four years.

In 1955 Trujillo built a new ballpark with lights. Dominican baseball joined what was then called Organized Baseball in the United States and the series began to be played in the winter from October through January, a practice that continues today.

The league had enlarged from the four traditional teams of Licey, Escogido, Aguilas Cibaeñas, and Estrellas Orientales to six teams with the addition of the Bulls of La Romana (Toros del Este) and the Giants (Gigantes) of San Francisco de Macoris. There are currently five baseball parks with lights.

After 1937, Trujillo did not interfere with baseball again until one day in January 1958 when during a playoff game between Licey and Escogido, his brother Petain came down to the field of play and slapped the face of Escogido shortstop Andre Rodgers. The turmoil that followed was so great that the next night Rafael Trujillo showed up at the ballpark himself to quell any possible disorder. At that time, he watched his first (and only) complete professional baseball game.

JULIO M. RODRIGUEZ, MD is a board-certified pediatrician born in Montecristi, Dominican Republic, also the birthplace of Hall of Famers Juan Marichal and Osvaldo Virgil, the first Dominican to play in the major leagues. Because he had part of his training in St. Louis, Julio is a Cardinal fan and a friend of Julian Javier, the Cardinals second baseman in the 1960s. He is the head of SABR’s Juan Marichal Chapter based in Santo Domingo. He has contributed to this book with reviews of the biographies of the players published in it and feels happy about it.