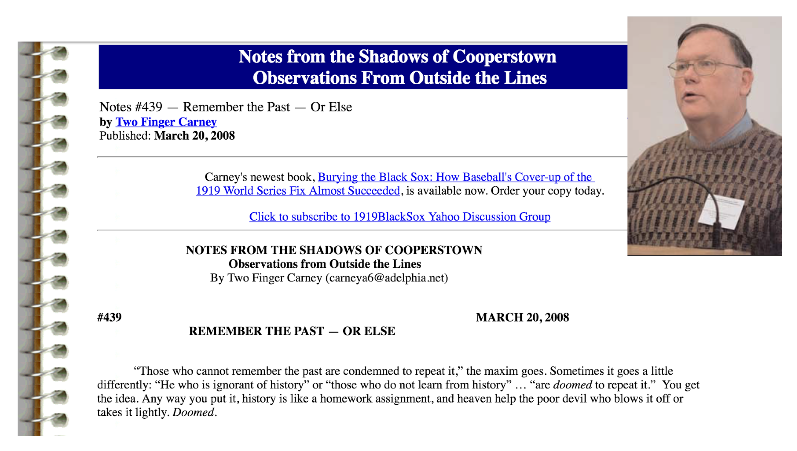 For more than 15 years, beginning in 1993, SABR member Gene Carney wrote a semi-regular column called “Notes From The Shadows of Cooperstown” from his home in Utica, New York. At first, Carney’s self-published “Notes” was an eclectic blend of essays, poetry, book reviews, and a little baseball history. Then, in September 2002, it took on a singular focus: the Black Sox Scandal.

Until his untimely death in 2009, Carney’s research focused almost exclusively on the ill-fated events of October 1919, the cover-up that followed, and the legal proceedings which put Shoeless Joe Jackson, Eddie Cicotte, and the other Chicago White Sox players involved on the record. 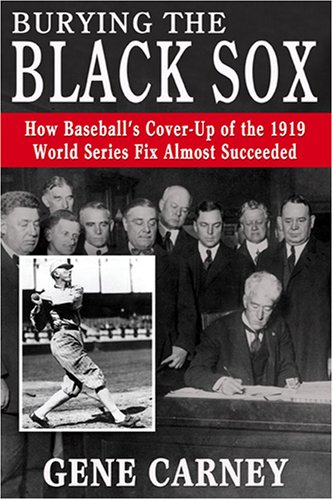 Much of the material that appeared in Burying the Black Sox was explored first in Carney’s weekly (and sometimes daily) “Notes” columns, published at the time on Sean Lahman’s Baseball1.com and later Seamheads.com. Even more than a decade after Carney’s book was published, his “Notes” columns are still chock-full of intriguing discoveries, nagging questions about the scandal, and other meanderings down the “B-Sox Trail.” Carney’s relentless energy and generous spirit were the driving force behind so much of the important research in recent years that has shed new light on the 1919 World Series and the scandal that followed, including the Black Sox Committee’s 2015 book, Scandal on the South Side: The 1919 Chicago White Sox.

It is in this same spirit that we share the entire collection of Gene Carney’s “Notes” columns related to the Black Sox Scandal, along with a Chronological Index and a Subject-Matter Index for those who are interested in digging deeper. While only a handful of Carney’s original “Notes” columns can now be found online, we have restored all of the 225 columns focusing on the Black Sox Scandal and made them available for download through the Box.com storage folder below.

As we approach the 100th anniversary of the 1919 World Series, we hope future researchers will find these files useful and help us continue to learn more about the Black Sox Scandal.

How to use the Index

This index includes a chronological listing of topics included in each of Gene Carney’s Black Sox “Notes” columns, starting with #268 in September 2002 to #493 in June 2009. For example, “Notes” #322 on February 15, 2004, included sections on: Chick Gandil’s final interview in 1969, a bribery attempt in the 1903 World Series, Hugh Fullerton’s all-time team, and Shoeless Joe Jackson’s interview with Shirley Povich. Use this index file to search for topics by date, then click the link at the bottom of this page to find and download the “Notes” columns you’re looking for.

The Index is organized by subject matter. For example, if you want to find every reference to the Chicago-based gambling trade publication Collyer’s Eye in Carney’s “Notes,” you can use this index to see that he wrote about Collyer’s Eye in the following “Notes” columns: #308, #317, #320, #321, #339, and so forth. Use this index file to search for topics by subject, then click the link at the bottom of this page to find and download the “Notes” columns you’re looking for.

How to view the “Notes” columns

The link above will allow you to access a folder with downloadable Microsoft Word documents containing Gene Carney’s Black Sox “Notes” columns from 2002 to 2009. Each column is numbered and dated, from #268 in September 2002 to #493 in June 2009, to correspond with the numbered columns in the Index. You can download the “Notes” columns individually by clicking the “Download” link to the right of the file name, or download the entire folder at once by clicking the “Download” button at the top of the page.

All care has been taken to restore Gene Carney’s “Notes” to their original form and to create an accurate index for these files. If you have any questions, comments, or corrections, please contact Black Sox committee chair Jacob Pomrenke.