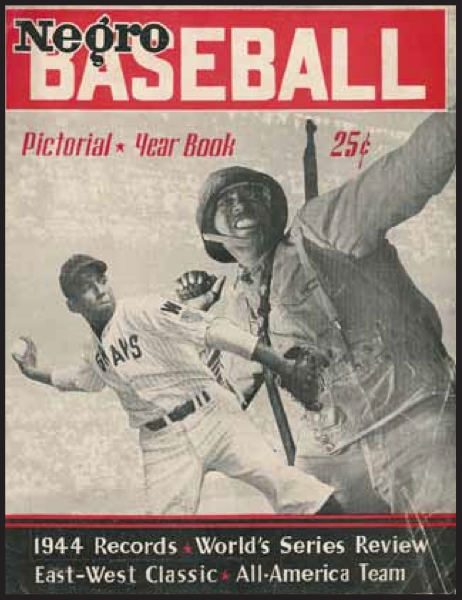 The war against the forces of fascism in Nazi Germany and Japan mirrored another war fought in the trenches of American life – that between the entrenched forces of racism and its ugly operating system of segregation, and a black populace straining to achieve equal treatment in a land ostensibly promising “liberty and justice for all.”

Coincidentally, the tenure of Adolf Hitler as the head of the National Socialist government in Germany –1933-1945 —mirrored the time frame of an informal campaign to integrate major-league baseball. In 1933 several sportswriters began to publicly question why major-league baseball should not have black performers. Several of these writers wrote in the mainstream press – Heywood Broun of the New York World-Telegram and Jimmy Powers of the Daily News both came out against baseball’s color line early that year, with other notable sportswriters such as Dan Parker of the New York Daily Mirror and Shirley Povich of the Washington Post weighing in later on during this period. The Daily Worker, the most prominent Communist newspaper, also produced hundreds of columns, starting in 1933, castigating major-league baseball for excluding black players. But not surprisingly, the prime participants in the battle to integrate baseball were the members of the black press, especially Sam Lacy and Wendell Smith. During his lengthy career (extending into the twenty-first century), Lacy wrote for several important black newspapers and was sports editor of the Baltimore Afro-American. Smith plied his trade during this time frame for the Pittsburgh Courier.1 The Courier was the leading black newspaper of the time, reaching a high of 350,000 in circulation in 1945 – in part because of the bold stands it took on the issues of the day.2

The Courier, with Smith as its sports editor, stepped up its campaign to integrate baseball in 1942, while at the same time championing a cause expressed in a letter it published on January 31, 1942, written by 26-year-old cafeteria worker James G. Thompson. He asked: “Is the kind of America I know worth defending?” His answer to this question stressed that dedication to victory abroad must be paired with a fight for victory against similar forces at home: “The first V for victory over our enemies without, the second V for victory over our enemies within. For surely those who perpetrate those ugly prejudices here are seeking to destroy our democratic form of government just as surely as the Axis forces.”3 This crusade came to be known as the Double Victory campaign.

Thompson’s letter squarely addressed the “American Dilemma” examined by Swedish sociologist Gunnar Myrdal in his landmark study of America’s race problem, to be published in 1944. Myrdal’s study explicated what he deemed a failure of the United States to exemplify its “creed” – that of a country dedicated to equality and liberty for all – by the relegation of the black population to second-class status.4 Thompson’s letter presaged Myrdal’s work by asking how America could fight a war abroad against prejudice and blind hatred while failing to address its racial issues at home.

One of those racial issues was the continuing segregation of the national pastime. As the Double V campaign swept black (and to a limited degree, even elements of white) America, especially in 1942 but to a lesser degree until V-J day in 1945, wartime Negro League baseball and some of its prominent figures championed the cause. One such champion, Cumberland “Cum” Posey, owner of the legendary Negro League powerhouse Homestead Grays, suggested in his weekly Courier column, called “Posey’s Points,” that every team in organized Negro baseball wear a Double V symbol on its uniform, stating his belief that the cause of “victory abroad and at home is more vital than any athletic victory any of us may attain.”5 Posey was prominent among those who worried about the future of the Negro Leagues if the white major leagues were integrated, so his eloquent dedication to the cause of Double Victory is noteworthy, as “victory at home” clearly would include ending employment discrimination such as the color line in baseball.

Another Negro League owner, Effa Manley, engaged in many activities supporting the war effort, including an active promotion of the Double V campaign.6 Similarly, Satchel Paige biographer Donald Spivey indicated that Paige was a supporter of the Double V.7 Paige was not shy in expressing his opinions, as he proved in the run-up to the 1942 East-West All-Star game, Negro League baseball’s preeminent showcase.

During the heat of the summer and the heyday of the Double V campaign, Paige felt compelled to speak over the public-address system to a throng of over 48,000 attendees before he came on in relief in the seventh inning. The reason: to deny reports that he questioned whether integration of major-league baseball was possible at that time. Paige claimed he was misquoted: He merely said that he doubted that a major-league team would pay him a salary commensurate with the $37,000 he earned in 1941 and that it would be better for a team of black players to integrate baseball rather than an individual who would face Jim Crow alone.8

Fans watched Satchel as he “gummed up the program with a three-minute pointless statement”9 in trying to defuse the controversy he created, and subsequently lost the All-Star game for the West, his first such loss after three earlier All-Star game wins. Meanwhile, the large crowd also saw symbols of the Double V displayed and distributed. The front page of the August 22 edition of the Courier carried a photograph of a woman wearing a Double V logo on her back selling “VV” buttons at the game. Inside the edition, a picture of a woman flashing “VV” with her fingers was captioned “At Chicago East-West All-Star Game.”10

By the time of the East-West All-Star game, the Double V campaign as covered by the Courier was slowing down, although it was by no means at an end. Starting with its February 7, 1942, edition through the end of 1942, the Courier printed 970 Double V items, peaking with 50 such items in its April 11 issue. The campaign spread throughout black America – “there were Double V dances and parades, Double V flag-raising ceremonies, Double V baseball games between professional black teams, Double V beauty contests, Double V poems, and a double V song, ‘Yankee Doodle Tan…’”11 In the June 13, 1942, issue the Courier reported on a Double V game in St. Louis. The thousands who attended watched as the New York Black Yankees defeated the Birmingham Black Barons, 8-4. They also saw a drum and bugle corps form a Double V on the mound, and a $50 Double V certificate being presented to the winner of a Miss Mid-West contest.12

The Double V campaign was also supported by other black newspapers. In another instance where black baseball was involved, the Atlanta Daily World reported on what it called a “true double-V victory” by the Birmingham Black Barons winning an opening day Negro American League doubleheader over the Memphis Red Sox in late May1943. The article mentioned as well that a high-school band formed a “V” before the game – the first victory of the day.13 All the prominent black newspapers of the day – the Chicago Defender, the Baltimore Afro-American, the Cleveland Call and Post, the New York Amsterdam News, the World, and many others – reported on the progress of the Double V campaign even if it was not with the sustained attention of the Courier.

During 1942 especially but also throughout the war, sportswriters Smith and Ches Washington of the Courier, Fay Young of the Defender, Mabray “Doc” Kountze of the Call and Post, Dan Burley of the Amsterdam News, and Lacy and Art Carter of the Afro-American were promoting the breaking of the color line, often invoking the theme, if not the explicit terminology, of the Double V. Washington told the story of a victorious boxer who invoked the themes of Double V. He also trumpeted the triumphs of black track stars and boxers over the “enemy abroad” while wishing that baseball stars like Josh Gibson be given a chance at home.14 Smith used military terminology as he suggested that Negro fans organize and fight the battle for baseball integration with a “concentrated, nationwide action” much like that of the Double V campaign.15 And on the same day, April 11, 1942, that the Courier provided its peak coverage of the Double V campaign, Kountze echoed the words of the American Negro Press’s Claude Barnett that “if a colored man is good enough to fight for his own country, he certainly ought to be good enough to work here” as Kountze made the case that “something ought to be done. This very year. I mean, Yeah, 1942” to integrate major-league baseball.16

While the Double V campaign’s momentum slowed down throughout the war, it did not disappear entirely from the pages of the Courier until victory was declared over Japan in September 1945. Until then, the Courier continued the practice started at the commencement of the Double V campaign of putting a “vv” at the end of each article to separate it from the article appearing beneath it. Meanwhile, the calls for baseball integration continued to build to a crescendo in the Courier and the other black newspapers from 1942 through the end of the war. In the summer of 1942, the black press reported that Bill Benswanger, owner of the Pirates, would be trying out Negro League stars Leon Day, Willie Wells, Josh Gibson, and Sam Bankhead. It never came to pass. At the end of 1943, the Negro Newspaper Publishers Association met with the American and National Leagues. Baseball Commissioner Kenesaw M. Landis, an ardent segregationist, went on record as not being against the move to place Negro players in the major leagues. Everyone knew otherwise. Yet Courier president Ira Lewis spoke at this meeting, and invoked the concept of national unity in suggesting that baseball integration would bring joy to 15 million black Americans and millions of white Americans as well.17 Even though the Courier was no longer actively promoting the Double V by then, it was certainly continuing the “campaign for the integration of Negro players into the major leagues,”18 as described by Wendell Smith in late 1943. As history would later prove, a partial victory against racism at home – the signing of Jackie Robinson by the Brooklyn Dodgers – would virtually coincide with the victory against fascism abroad in the fall of 1945.

Jackie Robinson had his own indirect connection to Double V. According to essayist and cultural critic Gerald Early, Jackie likely would not have become an officer in the Army without the publicity created by the Double V, along with a behind-the-scenes campaign started in 1937 by Pittsburgh Courier owner Robert Vann to start the process of getting black officers in the military.19 Joe Louis also applied pressure on the military to commission black officers; Jackie said that without Louis “the color line in baseball would not have been broken for another ten years.”20 Louis was another supporter of the Double V campaign,21 and his wife, Marva, was the Double V girl of the week in the Courier of April 11, 1942.22

In the end, there is a consensus among historians who have researched the Double V, the black press, and African American history. The successful campaign to integrate baseball naturally fit within the larger themes of Double Victory. As Henry Louis Gates put it, one of the two most important legacies of the Double Victory campaign is that “through the columns of its sportswriter, Wendell Smith … it doggedly fought against segregation in professional sports, contributing without a doubt to the Brooklyn Dodgers’ decision to sign Jackie Robinson. …”23 The other legacy was the ultimate desegregation of the US Army by Harry Truman in 1948. A double victory – integrating baseball and one year later, the military – had now been accomplished. But the larger struggle for racial justice had just begun.

DORON “DUKE” GOLDMAN is a longtime SABR member who is specializing in research on baseball integration and the Negro Leagues. In addition to expanding his research on the Double Victory campaign, he is currently researching various aspects of the career of Monte Irvin.