Editor’s note: This article was originally published in the June 2018 edition of the SABR Black Sox Scandal Research Committee Newsletter. 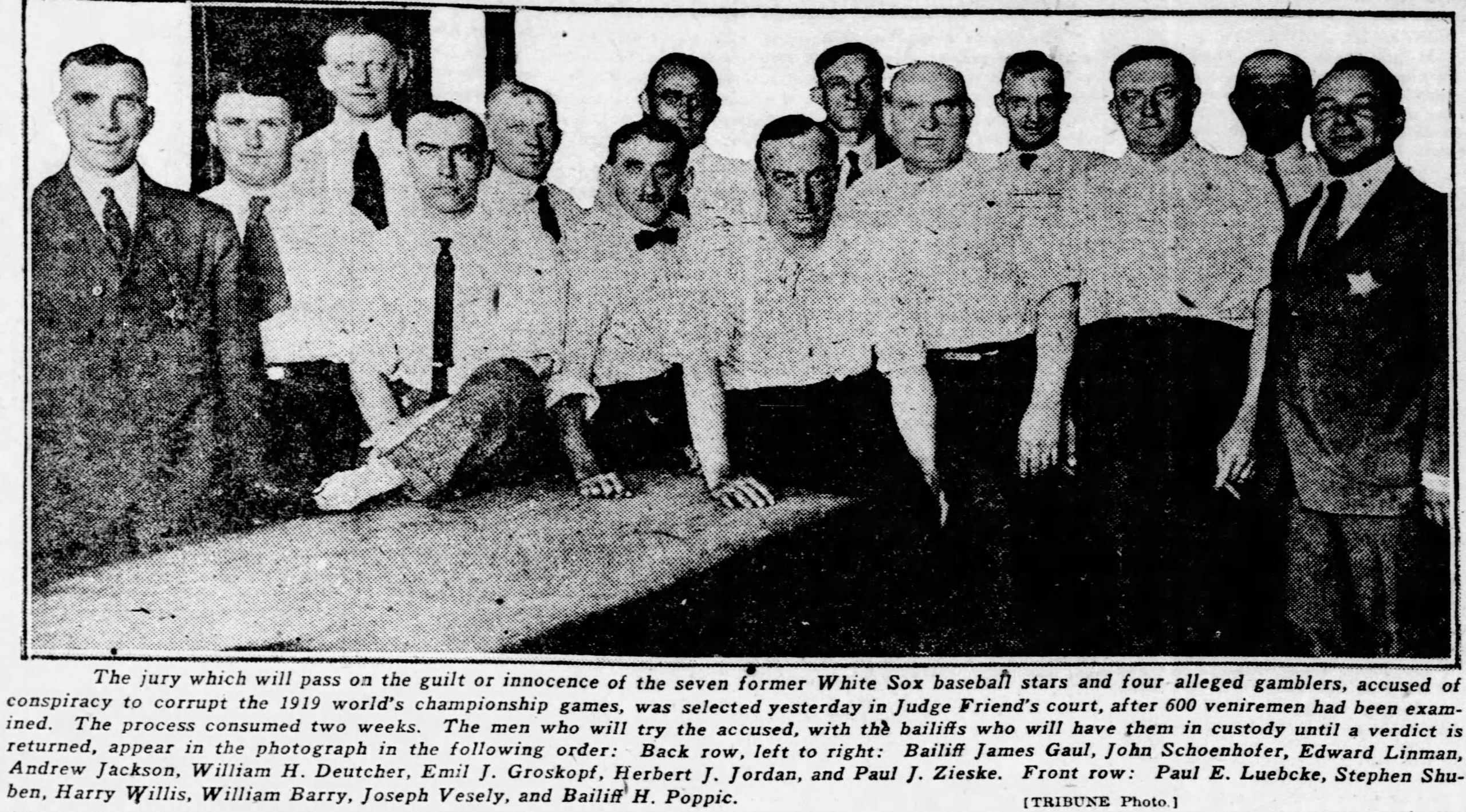 Ultimately, the legal — as opposed to the moral — guilt of the accused Black Sox players during their criminal trial in 1921 rested on the judgment of the twelve jurors selected to determine their fate.

The jurors voted to take a vow of silence on why they reached their verdict1 and, so far as is known, the jurors kept that vow. The only indication of their thoughts came from an offhand remark by jury foreman William Barry to Judge Hugo Friend. As Friend recounted years later, Barry told him that the jury was particularly impressed by White Sox general manager Harry Grabiner’s testimony showing that the White Sox had earned large profits (i.e., not suffered any financial loss) in the years the Black Sox were throwing ballgames.2

Black Sox historian Bill Lamb, author of Black Sox in the Courtroom and the recognized expert on the trial, suggests that the effect of Grabiner’s testimony can be used to rationalize the jury’s verdict — i.e., acquit the players regardless of their legal guilt or innocence. He points to the fact that the jury took less than three hours to reach a series of verdicts on a complicated, multi-defendant case, suggesting the jurors took little time in evaluating the evidence presented.3

Given the nationwide interest in the case, and the multiplicity of defense attorneys, jury selection in the Black Sox trial took longer than anticipated. The prosecution and defense eventually went through the regular jury pool of 100 people, plus five more special venires of 100, for almost 600 prospective jurors in all, before settling on the final twelve.4

Chicago Cubs fans were barred as jurors, presumably because they would have a bias against the Sox players. One prospective juror was excused simply because he occasionally attended a Cubs game.7 In general, the prosecution wanted baseball fans on the jury, on the theory that baseball fans would be more outraged at game-fixing and thus more likely to vote to convict.

The prosecution quizzed jurors on whether they would accept accomplice testimony — foreshadowing the prosecution’s use of co-conspirator Sleepy Bill Burns as a star witness.8 As has often happened in practice, prosecutors feared that jurors would disregard the testimony of one “ratting out” his confederates.

In their questions to prospective jurors, lawyers for the defendants appealed to resentment that jurors might have toward wealthy team owners such as the Chicago White Sox’s Charles Comiskey. The Sporting News resented this attempt to “becloud the issue in question,” to excuse crookedness on the grounds that the players were poorly paid, that the players were (in the words of defense lawyers) little more than slaves, “bought and sold like negroes were before 1861.”

For The Sporting News, these lawyer tricks merely exposed how guilty the players were, tricks that “should get small consideration from any set of jurymen who know anything about the national game and who have any regard for justice.”9 Tricks or not, the defense meme seems to have influenced the jury.

After two weeks, only eight jurors had been selected. Impatient with the delays, Judge Hugo Friend threatened both sides with evening sessions to speed up the selection process. The judge also ended the practice of examining each prospective juror individually. He ordered all the candidates for the jury into the room as a group, and selected one lawyer from each side to deliver the competing theories of the case. This way prospective jurors could answer quickly whether their minds were open, avoiding the endless repetition of routine questions asked of each juror.10 The judge’s threats and orders worked — the next day, the final four jurors were selected.11

By all accounts, the twelve men selected were average, lower-middle-class Chicagoans, who ranged in age from 28 to 50. Ten lived in Chicago, their homes scattered throughout the city. The other two lived in the suburbs.

None of them professed any great interest in the game, although their post-trial behavior may suggest otherwise. After the not-guilty verdict was announced, “the courtroom was a love feast, as the jurors, the lawyers, and the defendants clapped each other on the back and exchanged congratulations. … Jurors then hoisted [Joe] Jackson, [Lefty] Williams, and several other defendants on their shoulders and paraded them around the courtroom before the celebrants finally gathered on the courthouse steps for a smiling group photo.”

Two jurors were quoted as wishing they would see Sox hurler Eddie Cicotte pitching for the Sox next year, and promising to cheer for him.12 Later that evening, jurors and defendants met at the Bella Napoli restaurant to celebrate together. The jurors and the ballplayers “left the restaurant together singing, ‘Hail, Hail, The Gang’s All Here.’ ” 13

The Black Sox appear to have received as fair a trial, before as fair a jury, as could be expected, given such a highly publicized, emotional, and polarizing case. But judging by this trial, the later Black Sox civil lawsuits in Milwaukee, and the 1919 Pacific Coast League game-fixing scandal14, the American justice system proved inadequate to police baseball.

Here are profile sketches of the twelve15 jurors: 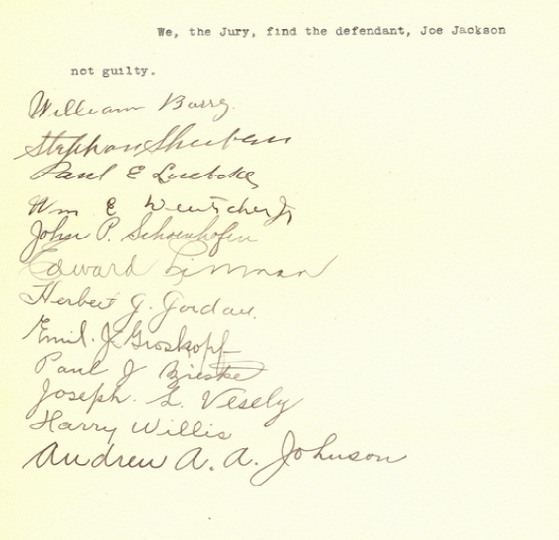 3 Lamb, 144. For a more detailed examination of jury nullification, see Lamb’s article “Jury Nullification and the Not Guilty Verdicts in the Black Sox Case,” SABR Baseball Research Journal, Fall 2015, accessed online at http://sabr.org/research/jury-nullification-and-not-guilty-verdicts-black-sox-case. Newspaper reports cited by Lamb indicate the jurors informally told reporters that the verdict would have been the same had the defense presented no witnesses, suggesting that the jury decided (legitimately or not) that the state had not proven its charges.

14 For more on the Milwaukee lawsuits, see Lamb, Black Sox in the Courtroom, 189-193. For more the PCL scandal, see Larry Gerlach, “The Bad News Bees: Salt Lake City and the 1919 Pacific Coast League Scandal,” Base Ball: A Journal of the Early Game, Spring 2012, Volume 6, No. 1 (Jefferson, North Carolina: McFarland & Co.)

15 The lawyers tentatively accepted at least one other prospective juror, but that man (Michael F. Lidgen, a clerk for the city’s elevated railway) was later excused. See the Chicago Tribune, July 6, 1921.

https://sabr.org/wp-content/uploads/2020/03/research-collection4_350x300.jpg 300 350 sabr /wp-content/uploads/2020/02/sabr_logo.png sabr2018-08-10 12:48:442021-08-10 13:01:00Twelve Men Out: The Middle-Class Chicagoans Who Made Up the Black Sox Trial Jury
LnRiLWNvbnRhaW5lciAudGItY29udGFpbmVyLWlubmVye3dpZHRoOjEwMCU7bWFyZ2luOjAgYXV0b30gLndwLWJsb2NrLXRvb2xzZXQtYmxvY2tzLWNvbnRhaW5lci50Yi1jb250YWluZXJbZGF0YS10b29sc2V0LWJsb2Nrcy1jb250YWluZXI9Ijc2YjllMTlhZWJkNzhiNDY3YjA0YzY0YWNmZTMzMTY3Il0geyBwYWRkaW5nOiAwOyB9IC50Yi1maWVsZFtkYXRhLXRvb2xzZXQtYmxvY2tzLWZpZWxkPSJlYzI4OWVkZTg1NjU3MmE3ZDFiMGI2NGE3NjFmYmIxZCJdIHsgZm9udC1zaXplOiAxNnB4O3RleHQtYWxpZ246IGxlZnQ7IH0gIC50Yi1maWVsZFtkYXRhLXRvb2xzZXQtYmxvY2tzLWZpZWxkPSJlYzI4OWVkZTg1NjU3MmE3ZDFiMGI2NGE3NjFmYmIxZCJdIGEgeyB0ZXh0LWRlY29yYXRpb246IG5vbmU7IH0gLnRiLWZpZWxkcy1hbmQtdGV4dFtkYXRhLXRvb2xzZXQtYmxvY2tzLWZpZWxkcy1hbmQtdGV4dD0iZjQ4MDk2YTNmYjE0YmUwYzdkOWRjYzkyNDc1MzBkMjAiXSB7IHBhZGRpbmctYm90dG9tOiAxMHB4OyB9IEBtZWRpYSBvbmx5IHNjcmVlbiBhbmQgKG1heC13aWR0aDogNzgxcHgpIHsgLnRiLWNvbnRhaW5lciAudGItY29udGFpbmVyLWlubmVye3dpZHRoOjEwMCU7bWFyZ2luOjAgYXV0b30gIH0gQG1lZGlhIG9ubHkgc2NyZWVuIGFuZCAobWF4LXdpZHRoOiA1OTlweCkgeyAudGItY29udGFpbmVyIC50Yi1jb250YWluZXItaW5uZXJ7d2lkdGg6MTAwJTttYXJnaW46MCBhdXRvfSAgfSA=