Astrodome Proves to Be No Hitters Park

This article was published in the 2014 The National Pastime.

Long fences and “dead” indoor air gave Astrodome a reputation for being unfriendly to hitters. This analysis compares batting average, slugging percentage, and home run rate (home runs per 1,000 at-bats) for all Astros games at home (in the Dome) and on the road. The Astros played the same teams at home as they did on the road, and the same players were involved in all of the games, in a roughly equal spread of home and road games.1 (See Table 1.) 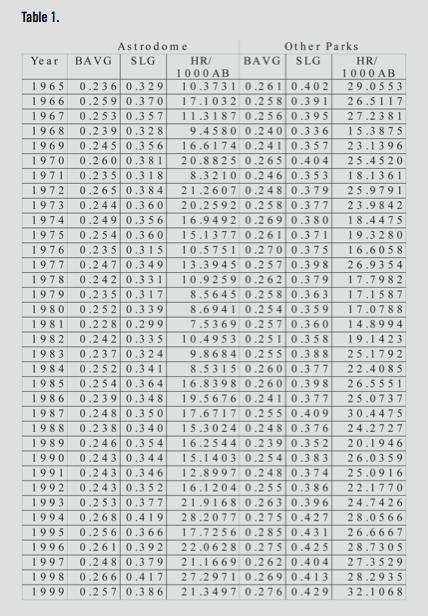 We begin with the null hypotheses that batting average, slugging percentages, and home run rates have equal means, and seek to determine in each case if the category proves to be significantly lower at the Astrodome than at other parks.

A two-sample t-test of batting average, assuming unequal variances, produces a “p” value of 4.8E-05— indicating at well over the 99% level that batting averages prove significantly lower in the Astrodome.

A two-sample t-test of home run rate, assuming unequal variances, produces a “p” value of 4.17E-09— indicating at well over the 99% level that the home run rate proves significantly lower in the Astrodome.

All three categories show strongly significantly lower numbers for the games played in the Astrodome, compared to games on the road in other National League ballparks. 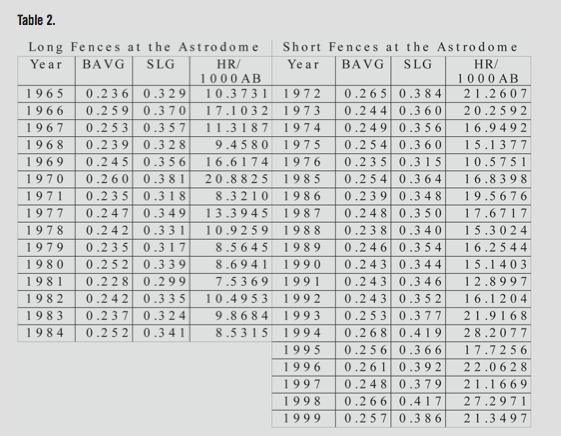 When compared with other parks in the league, even the shorter-fence version of the Dome still was significantly worse for hitters when compared with the other parks, “p” values of 0.0034 for batting average, 0.00094 for slugging percentage, and 1.43E-05 for home run rate. And in every case, the home run rate showed the most significant difference between the Astrodome and other ballparks.

PAUL GEISLER JR. grew up in San Antonio, Texas, and has been a Lutheran pastor for over 35 years. He lives in Lake Jackson, Texas, with his wife Susan and their three children: Sarah, Brydon, and Johanna. He loves anything baseball—playing, watching, coaching, researching, and writing.