Arguably the greatest catch in the history of baseball was the basket catch Willie Mays made of a long fly ball in center field in the Polo Grounds in Game 1 of the 1954 World Series, on September 29, 1954. The score was tied 2–2 in the top of the eighth. With runners on first and second, Vic Wertz hit a fly ball, 450 to 480 feet, deep into the unusually deep center field of the Polo Grounds. Mays caught up with the ball and caught it, his back to home plate, with his glove hand held palm-up. He fired a bullet back to the infield, holding the Indians’ Al Rosen to first, although Larry Doby (remember that name) was able to advance to third. Had the ball not been caught, the Indians would have broken the game open and it would not have gone into extra innings. The Giants won that game and went on to sweep the mighty 1954 Indians. Mays’s catch is often considered to have set the tone for the Series. 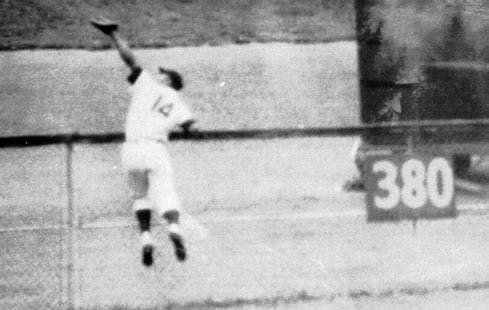 Lost to the memory of all but a few, and perhaps overshadowed by Mays’s feat in the World Series only two months later, is a catch the Indians’ own center fielder, Larry Doby, made at Municipal Stadium in a game against the Washington Senators. It was a day game on July 30, 1954, the first of a four-game series. The Indians, in the heat of a pennant race with the Yankees, were leading 5–3 in the top of the third. Art Hottleman was on the mound for the Indians. With one out and a runner on first, Tom Umphlett hit a long fly ball to center-left. That, it appeared, would tie the game.

Doby, playing fairly deep, as was his practice, took off for the ball and, as he approached the fence, looked like he was going to crash into it. Instead, he leaped over the top of it, snatched the ball backhanded, and seemed to remain suspended in air for a moment. Finally, obeying the law of gravity, he came down onto the awning above the bullpen. He bounced off that and came down hard on the playing field, the ball still in his glove. Joe Flaherty, the second-base umpire, ruled it caught, and the crowd erupted.

Left fielder Al Smith, who had sprinted to where Doby lay, retrieved the ball and threw it to the infield to keep the runner from advancing.1 Doby was motionless. Cleveland players ran from the dugout. As they gathered around him, all eyes were on the huddle. After a few moments, Doby’s partially bald head emerged. The crowd gave him a standing ovation when Doby, still surrounded by his teammates, began making his way toward the Indians dugout.

About halfway there, he stopped and exchanged words with Indians manager Al Lopez. Doby stopped, put on his hat and glove, shook his head OK, and began walking back to his position in center field. The crowd erupted again. The whole episode took several minutes.

“I just went for the ball,” Doby said after the game, “same as I did for Jackie Jensen’s home run a couple of days ago, the one I missed. The fellows in our bullpen told me my right hand went through the awning before I bounced off. If it did I didn’t notice. I didn’t get hurt much. Knocked the wind out of me and my left shoulder gave me a jolt, where I hurt it before. Maybe it hurt a nerve.”2

“If this wasn’t the greatest catch of the century,” Frank Gibbons, sportswriter for the Cleveland Press, wrote the next day, “it must be at least a match for any other.”3 “I’ve seen them all,” Dizzy Dean said. “Moore, DiMaggio, and this here fellow named Mays. But I never saw a catch as good as this one and the pitcher ought to pay that Doby a month’s salary.”4

The author, 13 years old at the time and selling scorecards at Municipal Stadium, saw the catch. This account, based on his recollection, is corroborated by newspaper accounts and by Joseph Thomas Moore in Pride against Prejudice: The Biography of Larry Doby (Westport, Conn.: Greenwood Press, 1988), 102–3.