Editor’s note: The SABR Salute, first bestowed upon writer Fred Lieb in 1976, was designed as a manner of recognizing the contributions of some of the older members of the Society. Subsequent SABR Salutes appeared in the SABR Membership Directory and honored members who had made great contributions to baseball historical research. Fred Ivor-Campbell (1935-2009) received the SABR Salute in 1999; the following biographical sketch appeared in that year’s membership directory. 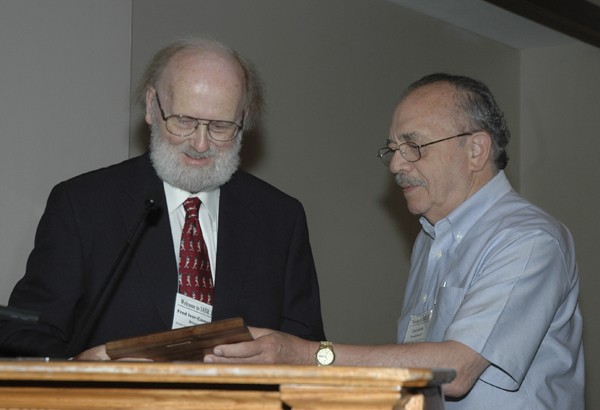 Like John Clarkson and Tim Keefe many years before him, Fred Ivor-Campbell was born in Cambridge, Massachusetts, October 9, 1935. He became a baseball fan in 1946 when he realized that if he wanted friends to talk to, he needed to know baseball.

He saw his first professional game the next summer when the hometown Braves defeated the Reds, 6-4. He saw his first televised game on October 6, 1948, when his understanding mother took him out of school to a nearby appliance store, where they provided a stool for him in front of a TV set for the World Series opener. He recalls a neat Braves win over the Indians.

His first foray into baseball research resulted in a pair of brief biographies of Pete Reiser and Larry Doby for a junior high English teacher. But it would be more than 35 years before his next baseball piece would appear. Time passed quickly as he earned a BA and two MA’s in college; served a hitch in the Army; and carved out careers as a writer and editor of Bible Study publications, a college communications director, and a college English teacher. Through forty-two years of marriage, Fred has enjoyed the love and support of his wife, Alma, also a SABR member and a regular convention-goer.

He discovered SABR in 1981 and joined after receiving an encouraging letter from executive director Cliff Kachline. John Thorn, founding editor of The National Pastime, gave him his first opportunity for SABR publication, and he’s been researching and writing baseball history ever since. His work appeared in several prestigious sport and biographical encyclopedias. He also earned a Sporting News-SABR Award in 1996 for editing Baseball’s First Stars. But what gratifies him just as much is to read his name on the acknowledgment page of books by other SABR members. Fred has become deeply involved with SABR over the years. Since 1991, he has compiled “Nineteenth Century Notes,” the Nineteenth Century Committee newsletter, and he chaired the committee from June 1992 to June 1998. In 1992 he was elected to a term as a SABR Director, and in 1998 to SABR’s vice-presidency. As Vice-President he chairs the Regional Development Committee, and has initiated a newsletter for regional leaders.

Among his current research goals is to discover precisely what Alexander Cartwright contributed to the creation of baseball. He also would like to do a book on Charlie Radbourn(e) and the Providence Grays. When Fred first joined SABR, member Dale Collett said to him: “That’s the best $15 you’ll ever spend.” “Well,” Fred says, “SABR membership is now $50, but I can still say it’s the best $50 I’ll ever spend.”