Editor’s note: The SABR Salute, first bestowed upon writer Fred Lieb in 1976, was designed as a manner of recognizing the contributions of some of the older members of the Society. Subsequent SABR Salutes appeared in the SABR Membership Directory and honored members who had made great contributions to baseball historical research. Pat McDonough (1906-1996), one of SABR’s 16 founding members, received the SABR Salute in 1988; the following biographical sketch appeared in that year’s membership directory. 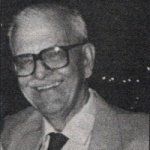 The guidelines for SABR Salute candidacy refer to baseball research contributions made before or after the 1971 formation of the Society. Pat McDonough, still a newsman at age 82, acknowledges that almost all of his baseball contributions were in the pre-SABR era. Ih fact, his membership lapsed for several years, but that does not lessen the need to recognize this pioneer researcher.

Pat was born March 11, 1906, in Fargo, North Dakota. The family of nine relocated to St. Paul in 1918. It was there at St. Thomas Military Academy where he saw other students passing around a little booklet. No, it’s not what you might think. It was a Rawling’s Baseball Guide and Pat, a sharp math student, became fascinated by the stats therein. He started to study box scores’ and go to games at Saints Park on Lexington Avenue. If he didn’t have the price of admission he would climb up a nearby hill where he could see at least the shortstop, two outfielders and the scoreboard. He got to know one of the players, Charlie Dressen, who, many years later, would become a close friend.

The family moved on to Union City, New Jersey, in 1922. Pat graduated from high school there and on July 1, 1925, he started work as a copyboy for the New York Telegram. He followed sports closely and when he spotted an error in the paper he would call it to the attention of sports editor Nat Fleischer, a nationally known boxing authority who would later edit The Ring. In 1926, at age 20, Pat joined the sports department where he began to write short pieces. He also supplied items from his stat-filled notebook like relief pitching records and one-run game decisions to baseball writers Dan Daniel and Fred Lieb. Recognition came when Lieb identified Pat in print as the “Al Munro Elias of Copyboys”. (McDonough and Lieb would join SABR in 1971, but Daniel, who had moved on to The Ring, declined.)

Further recognition came in 1927 when rookie Wilcy Moore made a spectacular relief pitching effort for the champion Yankees. Pat had been preparing his own game-by-game records since 1924 when Firpo Marberry of Washington became the top relief specialist. The young researcher developed a stat which he called winning games finished by relief hurlers. He had no outlet in 1924 but by 1927 he could make the comparison of Moore and Marberry and these became interesting support pieces in the New York Telegram.

Taylor Spink of The Sporting News became interested in this type of information and shortly Pat’s statistics-based material began to appear in the “Bible of Baseball.” Spink would call any time of day or night or would send a telegram saying what he wanted. These were not feature stories but punchy one-subject items which added a new dimension to game reports or weekly averages. At season’s end he would provide the list of shutouts or 1-0 games, team won-lost records vs each club, and various other records or information not provided in the regularly published averages. Included might be such negative features as grounding into double plays, caught stealing, wild pitches, passed balls, etc.

Membership in the Baseball Writers Association in 1932 did not alter his research-oriented interests. His first game coverage for the consolidated World-Telegram was the Sept. 21, 1934, twinbill where Dizzy and Paul Dean of the Cardinals beat the Dodgers 13-0 and 3-0. In 1939 he covered the Dodgers in Leo Durocher’s debut year as manager. The next year it was the Giants and then back to Brooklyn in 1941. In the spring of 1942, he asked to be relieved of game coverage and travel because his wife was ill and they had two small children.

Pat was identified with several other baseball features. In the early 1930s he would prepare his version of “probable pitchers” for tomorrow. It would be used on an occasional basis depending on available space. By the end of the 1930s, many papers were carrying probable pitchers. During the World Series each year he also wrote a feature called “Figger Filbert.” It was a round-up of all the possible statistics concerning participating teams and players. When his newspaper folded in 1967, Pat took over the Sports Reporter, a weekly bowling paper covering the greater NYC area. The eight-page publication was a one-man operation for this veteran newsman. Although he became one of the original SABR members in 1971, his work and family took up much of his time: His wife died in 1976. Their four offspring produced 11 grandchildren and three great grandchildren. Now, when the bowling season is slack, Pat includes in his weekly the baseball reminiscences of his long career.

Relief pitching stats are still his primary interest and he is happy that the firemen are getting the recognition they deserve. He certainly initiated that movement with those early articles on winning games finished by such by-gone standouts as Marberry, Wiley Moore, Clint Brown, Ace Adams and Hoyt Wilhelm. For this Pat should be awarded not only a Salute but a Save.

Related link: Read more about Pat McDonough and the other founding members of SABR, “The Cooperstown 16”