Editor’s note: The SABR Salute, first bestowed upon writer Fred Lieb in 1976, was designed as a manner of recognizing the contributions of some of the older members of the Society. Subsequent SABR Salutes appeared in the SABR Membership Directory and honored members who had made great contributions to baseball historical research. Ray Gonzalez (1919-2009), one of SABR’s 16 founding members, received the SABR Salute in 1988; the following biographical sketch appeared in that year’s membership directory. 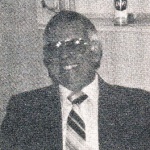 Raymond Gonzalez was born of Spanish parents in Havana, Cuba, on October 27, 1919. His primary and secondary education was received at an American School called Candler College, then considered a top Havana institution.

In 1938 he enrolled at Havana University where he studied business administration and accounting. He wrote sports for the official university publication called “El Lento” and also wrote baseball for a Havana newspaper called “La Luz.” He was interested in baseball at an early age and attended numerous exhibition games of major league teams in Havana. His early autograph collection reads like a Baseball’s Who’s Who of the 1930s and also includes such earlier dignitaries like Cy Young, Connie Mack, Clark Griffith, and Eddie Collins.

In the 1940s Ray began serious research of the records of players he had seen in earlier years. This research was expanded after he and his wife Aieida, whom he had married in 1945, immigrated to the U.S. in 1954. They settled in New York City, where he entered New York City College to continue work on an accounting degree. He also went to work at Joshua B. Powers, Inc., an advertising company where he later became comptroller. After that company went out of business in the late 1970s, he worked as an accountant at a New York hospital for seven years. He and his wife moved to Hialeah, Florida, in 1983, where they now reside in retirement.

Ray pursued a wide range of baseball research while in the New York area. He compiled game-by-game data on many famous and well known players, not all of them New York Yankees. They included such stars as Ruth, Gehrig, Dickey, Ted Williams, and pitchers Walter Johnson, Pete Alexander, Grove, Feller, Gomez, Ruffing, and fellow Cuban Dolph Luque.

His meticulous compilations sometimes called attention to discrepancies or inaccuracies in the official stats and these discoveries have not been always welcomed by the baseball establishment. He feels he is doing the right thing by providing the data, whether it is used or not. One recent correction had to do with Lou Gehrig hitting a triple rather than a double on Aug. 12, 1929. The Sporting News has made the change, giving Gehrig 10 triples and 32 doubles for that season.

Some of his special areas of major league research include details of all triple plays since 1900 (he has not focused much on the 19th century); all shutouts and low-hit games (0-1-2-3-4), where he uncovered information that Lefty Grove, a 300-game winner, never pitched a no-hit or one-hit game; pitcher/batter data on hit by pitch; balks, wild pitches, and passed balls; and unassisted double plays.

Prior to the establishment of SABR in 1971, Ray purchased some of the home run log from John Tattersall. From this resource he compiled pre-1950 home runs/grand slams given up by pitchers, and home runs hit and given up in extra innings. Willie Mays hit the most, 22, and Elroy Face gave up the most, 21.

A good sampling of Ray’s work has been carried in the Baseball Research Journal, starting in 1972. He had several articles dealing with Lou Gehrig, probably his favorite player. They included Lou’s 23 grand slams, his 15 steals of home, his replacements during his 14-year consecutive game streak, and a review of his 1925-34 one-two punch with Ruth, wherein it is revealed that they homered in the same inning 21 times and in the same game 74 times. He also published names and dates of all players hitting home runs off Christy Mathewson (91) and Walter Johnson (97). The editor rejected his offer of the home run log of Robin Roberts (505)! (But current SABR members can find it here.) Ray still has a large amount of interesting statistical data at his immaculate Florida office which could provide a sound basis for additional articles. The office includes an outstanding baseball library.

In addition to his extraordinary achievements in statistical research, Ray has made other contributions to SABR since he joined with the original 16 in 1971. As an accountant, he provided auditing services for the Society in its early years. He also served as treasurer for two years, 1975-76. He did not make the 1988 convention in Minneapolis but has attended most of them.

Related link: Read more about about Ray Gonzalez and the other founding members of SABR, “The Cooperstown 16”