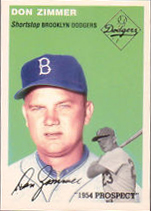 The warmth of early summer welcomed the Ladies Day crowd of 13,643 who gathered at Ebbets Field to watch the Redlegs play the Dodgers, each trying to gain ground on the league-leading Braves.1 Bonus baby Sandy Koufax took the ball for the defending World Champions, and faced off against Cincinnati’s Hal Jeffcoat. A dramatic comeback for Walt Alston’s scrappy crew, who rallied from a late 6-4 deficit, allowed the Brooks to escape with a 7-6 win. The climax was a long single by journeyman Rocky Nelson into the Bedford Avenue right field screen that scored pinch runner Charlie Neal easily from second, sending the Flatbush Faithful home with a smile. It was the second ninth-inning rally for the Dodgers in three days.

The victory was marred by a near-tragedy in the fourth inning as a stray 2-0 fastball from the righty Jeffcoat sent shortstop Don Zimmer, substituting for captain Pee Wee Reese, to Long Island College Hospital with a fractured left cheek bone and a mild concussion. As Redleg catcher Ed Bailey, Dodger Junior Gilliam, and umpire Vic Delmore rushed to the aid of the wounded Cincinnati native, a hush of trepidation swept through the ballpark. Jeffcoat himself looked worried that more than Zimmer’s 1956 season was in jeopardy. It was less than three years earlier that Zimmer, while playing for the St. Paul Saints of the American Association, suffered a near-fatal beaning that left him without full consciousness for 13 days. The concern for the popular utility infielder now was well-founded.

But, in the old show business tradition, the game must go on — and the teams provided the fans with an exciting afternoon of baseball, both before and after Jeffcoat’s errant pitch. Back-to-back home runs in the second inning, Roy Campanella’s ninth of the season and Gil Hodges’ twelfth, following a leadoff base hit by Carl Furillo, had staked Koufax to an early 3-0 lead. Cincinnati countered with two of their own in the third: a two-bagger by Jeffcoat scored Roy McMillan, who had singled, and Jeffcoat later scored on a double play grounder by Wally Post. Koufax gathered himself and breezed through the fourth and fifth as the Brooks clung to a one-run lead. After the beaning, Reese replaced Zimmer at shortstop.

Manager Birdie Tebbetts’ Ohio musclemen came alive in the sixth, teeing off for two two-run homers, bringing their team seasonal total to an impressive 92. After Johnny Temple had singled to lead off the inning, Duke Snider forestalled the damage briefly with a spectacular catch of Post’s bid for extra bases. But Gus Bell connected off Koufax for his 14th round-tripper, putting the Redlegs ahead 4-3. After Ted Kluszewski’s single, skipper Alston removed the young southpaw in favor of righty Don Bessent, marking the fifteenth straight game that a Dodger starter failed to complete his day’s outing.

The pitching change did little to quiet the Cincinnati onslaught as Frank Robinson greeted Bessent with another long ball, his 15th, scoring big Klu ahead of him, and putting his club ahead 6-3. Despite Hodges’ 13th homer in the last of the sixth, his second of the game, Jeffcoat appeared in control entering the last of the ninth with a 6-4 lead, having retired the champs in order in the eighth.

Reese opened the ninth with a single. Tebbetts wasted no time calling for his relief ace, the husky right-hander Hershell Freeman, to replace the tired Jeffcoat. After retiring pinch hitter Sandy Amoros, Freeman’s day quickly unraveled. Junior Gilliam singled to right, and Ransom Jackson, batting second in a juggled Brooklyn lineup, stroked a double past centerfielder Bell, scoring Reese and Gilliam with the tying runs. It was Jackson’s third hit of the day. Snider was walked intentionally as Freeman and Tebbetts hoped for a double play grounder to send the game into extra innings, but Nelson’s game-winner foiled the strategy. Right fielder Post retrieved the ball off the screen as Neal neared home plate and uncorked a tremendous throw that almost hit the dejected Freeman in the head before it bounced into the stands.

As Brooklyn’s tired pitching staff faced a rugged week with ten games booked over the next eight days, skipper Alston was relieved that his troops had escaped with a victory. Clem Labine, who had taken over for Bessent in the eighth, was credited with the win, upping his record to 6-1. Freeman took the loss, dropping to 5-2. But, as the sun descended over Flatbush, most Brooklyn hearts and minds were hoping for the best for their fiery, yet hard-luck utility infielder Zimmer, recuperating a short distance away.

Regarding the 1953 beaning, Zimmer later recalled: “They had to drill three holes in the left side of my skull to relieve the pressure, but when my condition didn’t improve, a couple of days later they drilled another hole in the right side of my skull. People think I’ve got a metal plate in my head — that’s always been the story — but the fact is they filled those holes up with what they call tantalum buttons that act kind of like corks in a bottle. I can therefore truthfully state that all of those players who played for me through the years and thought I sometimes managed like I had a hole in my head were wrong. I actually have four holes in my head.”2

As for the June 23, 1956 pitch and Jeffcoat’s intent, Zimmer said: “My teammates later told me they were convinced Jeffcoat was throwing at me, maybe in retaliation for Hodges’ homer. I don’t know. Only Jeffcoat does and he never called me or sent me a card when I was in the hospital.”3 Zimmer was out of action for three months before making a single pinch-running appearance on September 22 and resuming his career the next spring.

This was the first big league game I attended, though by no means the last. I was a 7-year old Brooklyn kid accompanied by my father and my older sister. I recall the colors: the brilliant green of the field, and the bright red of the numerals under the blue script “Dodgers” on the jerseys. And I recall the blackness of Jackie Robinson’s face: darker and stronger than those of other African-American ballplayers. But I’ll never forget, and this is what makes this game so memorable, the frightening sight of Don Zimmer lying flat on the ground. I discussed this with him at a book signing in 2001. He was impressed that I remembered the date; I’m not sure he did.

1 The New York Times reported the Ladies Day attendance as 13,643 whereas Baseball-Reference.com and retrosheet.org report it as 10,944.