LIVE FROM LONG BEACH — The Jetsons won’t be delivering baseball news to you a decade from now, but we’re not that far off from the world of the futuristic space-age cartoon world when it comes to advances in multimedia technology.

The question “Where will we get our baseball information in the future?” was examined by a panel of media leaders on Thursday at the SABR 41 national convention. The panel, moderated by SABR President Andy McCue, consisted of Dave Cameron, Managing Editor of FanGraphs.com; Sean Forman, founder of Baseball-Reference.com; Bill Squadron, head of Bloomberg Sports; and Russ Stanton, Editor of the Los Angeles Times.

Squadron said, “If we’re being honest, we don’t know what the biggest changes are going to be in the next 30 years. Ten years ago, there was no such thing as video other than through television. There was no mobile data experience. Now smart phones are outselling PCs. … You can’t buy a television anymore that isn’t ‘Internet ready.’ You’ll be able to watch a game on one side and the SABR website or a baseball research site on the other.”

Stanton added that baseball fans have more choices today than ever before.

“It’s hard for me to understand how we’re going to get information even faster than we do now, but we will,” he said. “I already get a text alert every time the Dodgers score a run. Our website, ESPN, and many others have these pitch by pitch services. … But there’s also a greater demand for what we do than at any point in history.”

Forman, a 2011 winner of the Henry Chadwick Award, noted that his Baseball-Reference database has 1.8 billion cells of play-by-play data — and growing bigger every day.

“We’re coming into huge datasets,” Forman said. “Thanks to MLBAM (MLB Advanced Media), we have a million pitches per season to track and now the Fieldf/x is generating millions and millions of data points per season.”

Cameron thinks there will only be more avenues for people to find — and produce — information about baseball in the years to come.

“The trend I’ve seen over the past decade, that I don’t think is going to slow down, is the democratization of ideas,” he said. “Technology is tailor-made to help people spread their ideas around.” 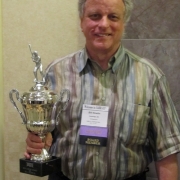