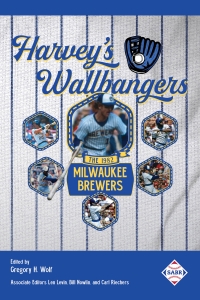 Add a pennant-winning baseball book to your collection from the SABR Digital Library:

Harvey’s Wallbangers: The 1982 Milwaukee Brewers commemorates a team that captured the hearts and imagination of baseball fans not just in Wisconsin, but around the country. Named for skipper Harvey Kuenn, the home-run slugging club was filled with a memorable cast of characters, future Hall of Famers, and All-Stars: from Robin Yount, Gorman Thomas, Ted Simmons, and Rollie Fingers to Cecil Cooper, Ben Oglivie, Paul Molitor, and Don Sutton. They were a close-knit and resilient group that weathered controversies and slumps to capture the AL East crown on the last day of the season, overcome a two-games-to-none deficit to win the best-of-five League Championship Series, and move to within one game of winning the World Series.

This book is the result of the tireless work of more than 40 members of the Society for American Baseball Research. SABR members researched and wrote all of the biographies, game accounts, and essays in this volume.


For more than 40 years, SABR and its members have led the way in publishing the best baseball historical and statistical research. Our publications program is shifting to take advantage of new methods of publishing. Not only will we continue to publish new books like Can He Play? A Look At Baseball Scouts and Their Profession (2011); Detroit Tigers 1984: What A Start! What A Finish! (2012); Sweet ’60: The 1960 Pittsburgh Pirates (2013); Inventing Baseball: The 100 Greatest Games of the 19th Century (2013); Scandal on the South Side: The 1919 Chicago White Sox (2015); Nuclear Powered Baseball/The Simpsons (2016), Au jeu/Play Ball: The 50 Greatest Games in the History of the Montreal Expos (2016); Cuban Baseball Legends (2016); No-Hitters (2017); Bittersweet Goodbye: The Black Barons, the Grays, and the 1948 Negro League World Series (2017), Major League Baseball A Mile High: The First Quarter Century of the Colorado Rockies (2018), and The 1995 Cleveland Indians: The Sleeping Giant Awakes (2019), which showcase the best efforts of SABR’s members, chapters and committees, but new technology makes it possible for us to bring out-of-print titles like Nineteenth Century Stars (2012); The Fenway Project (2013); The 1967 Impossible Dream Red Sox: Pandemonium on the Field (2017); Go-Go to Glory: The 1959 Chicago White Sox (2019); and Green Cathedrals (2020) back again.