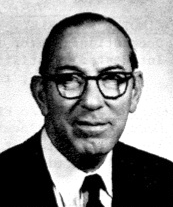 John C. Tattersall (1910–1981) was a great authority on home runs and early baseball records. His scrapbooks of multiple box scores for nearly every game from 1876 to 1890 proved vital for three generations of baseball encyclopedia: Turkin-Thompson in 1951, ICI/Macmillan in 1969, and Total Baseball in 1989. His day-by-day records have been lost, but what has survived is a batting and fielding summary and a pitching summary for each club in each year. Tattersall first gained national attention for his baseball research with his correction of Nap Lajoie’s 1901 batting average from .405 to .422 (later accepted as .426.) He found disputed hits in Cap Anson's record for 1879; compiled pinch-hit, hit by pitcher, and batters-facing-pitcher records where none had existed before; and established the monumental Home Run Log, which SABR purchased shortly after his death and, under the aegis of Bob McConnell and David Vincent, has continued to update.