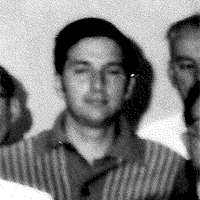 Bill Haber (1942-1995) was one of SABR’s founding members. Considered one of baseball’s greatest biographical researchers, Bill spent much of his time tracking down obscure ballplayers from the 19th and early 20th centuries whose deaths had gone unrecorded by the Baseball Encyclopedia or the National Baseball Hall of Fame. Working from his home in Brooklyn, he located the identities of more than 300 players whose fates were previously unknown. Bill Madden of the New York Daily News once wrote, “In terms of sleuthing, Dick Tracy, Magnum and Jim Rockford had nothing on Haber.” He was a longtime sports statistician and editor for Topps Chewing Gum Inc.

Click on a link below to read some of Bill’s early articles for SABR.