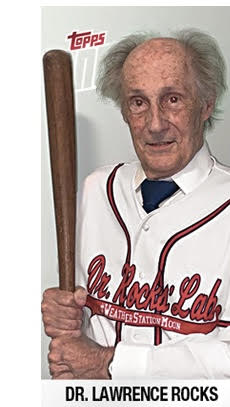 Dr. Lawrence Rocks has had a research career that has spanned from analytical chemistry to sports biochemistry to novel antiviral research. His 1972 book, The Energy Crisis, published just prior to the 1973 oil crisis, was widely acclaimed by both national television and print media, and influenced the creation of the US Department of Energy during the Carter Administration. He has been featured as an energy expert in the New York Times, Time Magazine, and National Review, and he has addressed the United Nations, and appeared on shows spanning many decades from the Today show to MLB Network. Dr. Rocks has been honored multiple times with commemorative baseball cards, including the 2019 official Lawrence Rocks Topps Allen and Ginter card, a 2020 Topps of the Class card, a 2021 Topps Now WeatherStationMoon card, and an Upper Deck WeatherStationMoon hockey card. On Earth Day 2021, the New York Islanders honored Dr. Rocks with a special commemorative silver hockey puck. Dr. Rocks, Professor Emeritus at Long Island University, received an MS in chemistry from Purdue University and his DSc (Doctor of Science) from Technische Hochschule Vienna. He and his wife Marlene are supporters of Ronald McDonald House Charities and have one son, Burton.