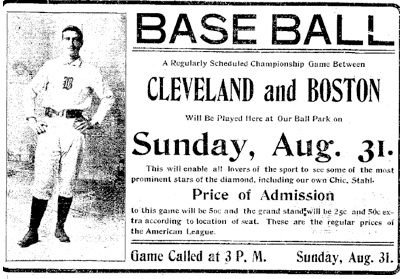 This article was written by Bill Griggs - Jim Nitz The last two of Fort Wayne’s 12 major-league games were played at League Park in 1902. These American League regular-season contests were played in Fort Wayne, Indiana, by the Cleveland Bronchos in order to circumvent the Sunday blue laws in Cleveland. At the time, Sunday baseball with paid admission was also illegal in Indiana, but the laws were not enforced locally with any degree of regularity, despite resistance from local ministers’ groups and the Good Citizens League.

On Sunday, June 22, 1902, Addie Joss pitched his club to a 6-4 victory over the Washington Senators before an estimated 2,000 to 2,500 fans. Joss defeated Bill Carrick, who had pitched for the Fort Wayne Colts, also nicknamed the Farmers, of the Interstate League in 1896.

On Sunday, August 31, 1902, Cy Young hurled the Boston Americans to a 3-1 conquest of Joss and his teammates, including Nap Lajoie. Young drove in the winning run with a single in the 11th inning and had tied the game in the fifth inning with what would now be scored a sacrifice fly. A crowd of 3,500 enthusiastic fans witnessed the last major-league game ever played at Fort Wayne. The overflow crowd was largely attributed to the return to Fort Wayne of area native Chick Stahl, the Boston center fielder, who was honored during his first at-bat. Stahl had moved to Fort Wayne from nearby Avila in his childhood and had become the area’s most revered sports figure. Stahl was joined on the Bostons by former Colt catcher Lou Criger, who had joined the National League Cleveland Spiders in 1896 after the Colts disbanded in September. Criger became Cy Young’s favorite catcher and was transferred with him from Cleveland to St. Louis in 1899, then jumped leagues with him to the Boston Americans in 1901.

Both teams had players who had competed against Colt teams in the Interstate League, which caused the rooters to divide loyalties. The Fort Wayne Sentinel reported, “The crowd viewed this game more as admirers and judges of good base ball than as rooters. The interest, therefore, was not one of loud outbursts of cheers as rooters, but only as fans.”

The game was advertised as featuring “our own Chic. Stahl,” featuring Stahl’s photo running the depth of the advertisement. Admission was 50 cents, with the grandstand costing an extra 25 or 50 cents depending upon the location of the seat, which were stated to be the regular American League prices.

Cleveland played five Sunday out-of-town home games in 1902, including the two in Fort Wayne. Playing the Sunday games in Fort Wayne, and the August 31 game in particular, had several ironies. Cy Young had a special clause in his contracts earlier in his career that exempted him from pitching on Sundays. In 1896 Criger and all the Colt participants, including former Cleveland Spider George Tebeau, were arrested for playing on Sunday at Lakeside Park in Fort Wayne.

The subject of Sunday baseball had been one of the most fiercely contested topics over the previous two decades in Fort Wayne, as well as in the entire state, until it was eventually legalized in 1909. In 1902 the town was left without a professional team, but the Fort Wayne Shamrocks (sometimes referred to as amateurs, other times called semipros) scheduled Sunday games at League Park, several of which required a paid admission, and met little or no resistance. The previous year, the team had played its entire schedule on the road. By the time of the Cleveland Bronchos games, the opposition from the local Good Citizens League had virtually dissipated.

The opening sentence of the Fort Wayne Sentinel’s article describing the Cleveland-Boston skirmish read, “The Base Ball fans at the Ball Park yesterday numbered about 3,500 and included some who do not ordinarily go to Sunday games.”

Because it lacked a professional tenant in 1902, the ballpark had been home to “The Great Fall Festival” during the previous week featuring “eight big free acts” and a wide variety of entertainment. League Park was home to a Central League franchise the following season.

Coincidentally, the final three major-league games played in Fort Wayne all involved at least one pitcher who either had already hurled a perfect game (John Montgomery Ward) or would later toss one (Joss and Young).

When Fort Wayne was granted a franchise in the Northwestern League in 1883, the team was unable to reach an agreement to play in the existing ballpark in Swinney Park, where Providence and Chicago had played the final game of their nine-game postseason series on October 24, 1882. Merchants on both the north and south sides of town offered incentives to the new team to build its new park in their area.

The chosen grounds, described as measuring 400 feet square by the April 25, 1883, Fort Wayne Daily Sentinel, were obtained on April 5. The grounds were in an open area on the northern edge of downtown nicknamed Jail Flats, often erroneously designated as Jailhouse Flats, because the Allen County Jail was in the southwest corner of the flats and the remainder was open, level ground. The area north of the jail was used for public hangings until 1883. The Kekionga amateur team had used the area to the immediate west, described as north of the canal, north of Bowser & Co. Foundry, on the commons, for practice games in 1866.

The parcel was legally described as lot 3 in the plat of Eliza Hanna, Sr. Addition to the City of Fort Wayne as recorded in Deed Book 60, pages 260-261 on September 11, 1871. A real-estate atlas published by W.W. Hixson & Co. of Rockford, Illinois, shows the exact dimensions to have been 380.16 by 365 feet after a previous sale-off for Clinton Street. The property was conveniently located just north of the downtown business district, north of the former Wabash and Erie Canal and east of Calhoun Street.

The April 11, 1883, Fort Wayne Gazette reported that the team had contracted with Link Bros. to erect the grandstand and fence and grade the grounds. The entire cost was $931. The original seating capacity was 1,500. The park was built and ready for play for the team’s first home game, on April 21.

League Park hosted what was mistakenly advertised as the first baseball game ever played by electric light. The game was originally promoted as part of a morning- afternoon-evening tripleheader to be played on Decoration Day, May 30, 1883, between the Fort Wayne and Quincy teams of the Northwestern League. The evening game was postponed and eventually played on the ensuing Saturday, June 2, between two picked nines consisting of what the Fort Wayne Daily Sentinel described as “a couple of scrub nines composed of college boys and a few of the members of the Quincy nine.” Several areas of the field were in shadows and power was lost on two occasions, plunging the park into complete darkness. The game was labeled by the Sentinel as “an amusing farce” and mercifully halted after seven innings. The paper described the score as “of no importance” and did not include it in its game report.

Nevertheless, League Park was filled to capacity with 2,000 fans. Fan interest was so high that some freeloaders employed hatchets and knives to make peepholes in the pine fences. Others observed this novel, one-time event from the tops of wagons parked on Clinton Street.

The park was used until the demise of the Northwestern League after the 1884 season. It was rebuilt in 1890 for the Indiana State League and further used for the 1891 Northwestern League and 1892 Western League franchises. In 1893 the grandstand and fence were moved to Lakeside, a mile east of downtown Fort Wayne. The new park was then known as both Lakeside Park and League Park until 1898. The Fort Wayne Colts of the Interstate League played at Lakeside Park until 1899, when this park was abandoned and the grandstand moved to the Robinson Park amusement park. Old League Park was rebuilt and baseball returned to the original Calhoun Street location. During the period when this ballpark lay unused, its open spaces were used for circuses, open-air exhibitions, and political gatherings, as well as pickup baseball and football games.

The new park, which three years later would host Fort Wayne’s final two major-league games, was enlarged by 40 feet on the north, bringing its dimensions to 400 by 440 feet, including the street. It was located south of the St. Marys River (left-field side) between Calhoun Street on the west (third-base side) and Clinton Street on the east (right-field side), and a mostly empty lot (with several small buildings including a stable and junk warehouse) on the south (first-base side).

Home plate was located in the southwest corner so that home runs hit over the short right-field fence landed on Clinton Street. Sanborn maps from 1902 and 1918 show that it was only 275 to 300 feet down the right-field foul line. The exact positioning of the left-field fence cannot be determined from the Sanborn maps. It may have been 300 feet if an inner fence was erected or 350 feet if only the outer fence was used. Center field was 400 to 425 feet away. Several pictures exist of League Park from the early 1900s, but they do not help in determining the field dimensions. The infield was changed from dirt to grass after the 1900 season.

The wooden grandstand with its 20-foot-high roof was lengthened in 1908 as the bleachers were shifted farther down the foul lines. The exact makeup of the 19th-century League Park is unknown as no known pictures or Sanborn depictions exist from that era. Precise capacity figures for League Park in specific years are also unknown, but crowds between 2,000 and 3,500 watched the 1902 Cleveland contests and 5,000 attended games in the 1920s.

The old wooden grandstand burned down on July 12, 1930, and arson was suspected. The stands were rebuilt by July 22, with seating capacity decreasing from 5,000 to 2,000. By April 1939 the plot had been cleared of all structures and it became an open park used for a variety of events including pro wrestling. Poinsatte Motors then employed the property for its dealership through the 1980s. At of 2011 Fort Wayne’s longest-running ballpark location was the site of Headwaters Park. The north end of Calhoun Street was closed and absorbed into this new city park. A monument to League Park in Headwaters Park erroneously claims that the first major-league game was played there on May 4, 1871, instead of the Kekionga grounds at Camp Allen, where it had been played.