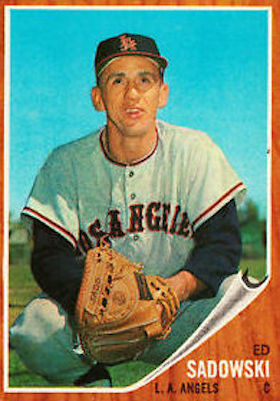 Ed Sadowski was a right-handed-hitting catcher who played in 217 major-league games in five seasons between 1960 and 1966. He played for the Boston Red Sox (1960), the Los Angeles Angels (1961-1963), and the Atlanta Braves (1966). Despite his brief major-league career, Sadowski had the distinction of playing for both the Los Angeles Angels and the Atlanta Braves in their inaugural seasons. Sadowski was the eldest of a trio of big-league baseball-playing brothers. His youngest brother, Bob Sadowski (born 1938) pitched for the Milwaukee Braves (1963-1965) and the Boston Red Sox (1966). Ted Sadowski (born 1936), the middle ballplaying brother, who died on July 18, 1993, pitched for the Washington Senators (1960) and the Minnesota Twins (1961-1962). A nephew, Jim Sadowski (born 1951), pitched in four games for the Pittsburgh Pirates in 1974.

Edward Roman Sadowski was born on January 19, 1931, in the working class neighborhood of Lawrenceville in Pittsburgh. Located northeast of downtown Pittsburgh, the Lawrenceville of Sadowski’s childhood was populated primarily by Polish and other Eastern European immigrants. The neighborhood had narrow streets that were filled with brick row houses and fathers who worked in the city’s numerous steel mills.1

Sadowski attended St John’s Lyceum High School, where he was the first of three Sadowski brothers to excel on Lyceum’s baseball diamond. Sadowski’s “first love” at St. John’s Lyceum, he said in a 1959 interview with The Sporting News, was basketball, a sport in which he was skilled enough to receive a scholarship offer from the University of Notre Dame. Instead of playing college basketball in South Bend, Sadowski accepted a scholarship to study engineering at the Carnegie Institute of Technology (later Carnegie-Mellon University). After one year of college, Sadowski left school to pursue a professional baseball career.2 In 1950 he signed on with the independent Radford (Virginia) Rockets of the Class D Blue Ridge League, beginning his decade-long journey through the minors. The following year, Sadowski was acquired by the Boston Red Sox organization and was assigned to the Marion (Ohio) Red Sox of the Class D Ohio-Indiana League. The young catcher had an excellent season at the plate for Marion in 1951, batting .308 in 125 games.

Sadowski was in military service during the 1954 and 1955 seasons. He returned to baseball in 1956 with the Red Sox-affiliated San Francisco Seals of the Open Classification Pacific Coast League. He shared duties behind the plate for the 1956 Seals with future Red Sox player and team owner Haywood Sullivan. Sadowski displayed some power for the Seals, hitting seven home runs in 213 at-bats in 1956. He continued to platoon catching duties with Sullivan for the Seals in 1957. His hitting numbers remained steady that season: .245 average, 7 home runs, and 38 RBIs in 108 games.

In 1958 the Red Sox assigned Sadowski to the Minneapolis Millers of the Triple-A American Association. He performed well as the starting catcher for the Gene Mauch-managed Millers in 1958 and 1959, proving a steady defensive presence behind the plate and producing good power numbers (15 home runs in 1958 and 14 in 1959). He was named an American Association All-Star both seasons. The Millers represented the American Association in the Little World Series in both of Sadowski’s years with the club, sweeping their way to a championship against the International League’s Montreal Royals in 1958 and losing in seven games to the Havana Sugar Kings in 1959. During Sadowski’s time in Minneapolis, the Red Sox considered the long-tenured minor leaguer to be a solid major-league prospect with a good combination of offensive and defensive skills.3 Mauch said of Sadowski, “[H]e’s great on defense and we were able to do well in Minneapolis because of the great defense to which he contributed greatly.” Mauch added, “[H]e won’t hit for much of an average, but he’ll hurt you with the bat when he does hit.”4

Sadowski made his major-league debut for the Red Sox on April 20, 1960, in a Wednesday afternoon contest in Boston’s third game of the season at Fenway Park against the New York Yankees, entering as a defensive replacement for an injured Haywood Sullivan after the first inning. Sadowski batted eighth and went 1-for-3. In the second inning, he walked on his first major-league at-bat against Bob Turley and later scored on a sacrifice fly by Don Buddin. Sadowski got his first career hit and RBI in the seventh inning with a two-out double off Art Ditmar that drove in Pumpsie Green with an insurance run for the Red Sox in their 7-1 victory.

Sadowski spent the first half of the 1960 season on the Red Sox roster, backing up Russ Nixon. The 29-year-old rookie was assigned the number 8, making him the last Red Sox player to wear that number before Carl Yastrzemski did. The right-handed-hitting Sadowski started primarily against left-handed pitchers since Nixon batted left-handed.5 Sadowski spent time on the 15-day disabled list in May with a broken index finger. He returned to active duty on May 29, catching both games of a doubleheader against the Baltimore Orioles.6 As a backup, Sadowski played in 38 games, hitting .215 with 3 home runs and 8 RBIs. In July the Red Sox sent him back to the minors, loaning him to the Los Angeles Dodgers Triple-A affiliate, the Spokane Indians of the Pacific Coast League, for the remainder of the season.

On December 14, 1960, the Los Angeles Angels made Sadowski their 11th selection in the American League expansion draft and the first catcher selected by either of the drafting teams, the Angels and the Washington Senators. Sadowski’s draft position made him the prospective starting catcher for the Angels, but he failed to secure the job during spring training.7 Earl Averill, the 29-year-old son of former All-Star and Hall of Fame center fielder Earl Averill, and a veteran catcher, who was selected 45th overall in the draft, won the starting job, due in large part to Sadowski’s poor hitting in camp. The 38-year-old Del Rice was now in line to be the backup for Averill. Sadowski was on the Angels’ roster when the season started, but was optioned in early May to the Dallas-Fort Worth Rangers of the Triple-A American Association. He played in 14 games, 11 of them in the outfield, for the Rangers before being recalled by Los Angeles at the end of May to bolster the catching corps for their long Eastern road trip. Sadowski ended up spending the lion’s share of the season as Averill’s backup, playing in 69 games and catching in 56 of them. He recorded a .987 fielding percentage, making only four errors for the season. He batted .232 with 4 home runs and 12 RBIs.8

Sadowski fell to third on the Angels’ depth chart in 1962 behind Averill and the new starting catcher, 23-year-old Buck Rodgers. The Angels made a concerted effort to add youth to their roster, relegating Sadowski (age 31) to a peripheral role.9 Sadowski played in only 27 games that season. In 1963 he figured more prominently in the Angels’ catching platoon, serving as Rodgers’ backup for the whole season. He excelled defensively in 1963, making only one error in 68 games behind the plate. Sadowski’s outstanding catching performance was tempered by his weak hitting. He hit .172 with 4 home runs and 15 RBIs in 174 at-bats. (One of his teammates on the Angels that year was Bob Sadowski, a utility player to whom he was unrelated but who happened to have the same name as Ed’s brother.

In 1964 the Angels assigned Sadowski to Triple-A Hawaii. He shared the starting catcher’s duties with future major leaguer Jack Hiatt. After the season, the Milwaukee Braves acquired Sadowski from the Angels and assigned him to their International League affiliate in Atlanta, where he spent 1965 as the backup catcher to Bob Barton in the final season of the Triple-A Atlanta Crackers. When the major-league Braves replaced the Crackers in Atlanta Stadium in 1966, Sadowski was sent to the Braves’ Triple-A club as it shifted to Richmond, Virginia, where he again was a reserve catcher – this time backing up Chris Cannizzaro.

Near the end of their inaugural season in Atlanta, the Braves called up Sadowski. He played in the Braves’ last three games of the season. In the first game of an October 1 doubleheader against the Cincinnati Reds, Sadowski had a pinch-hit RBI single off Milt Pappas in the eighth inning and later scored on a single by Mack Jones. Sadowski caught the second game of the doubleheader at Crosley Field as well, going 0-for-5 in a 6-3 victory. The next day Sadowski caught the final game of the Braves’ season, a 4-2 victory over the Reds. At the plate, he went 0-for-3 with a walk. It was his final major-league appearance. Released after the season, Sadowski retired as a player.

Sadowski spent three seasons in the Montreal Expos organization during his former manager Gene Mauch’s tenure with the franchise. In 1969 he coached for the Sarasota Expos of the Class A Florida Rookie League. In 1970 he worked as a roving pitching coach, and in 1971 Sadowski managed the Jamestown (New York) Falcons of the short-season New York-Penn League to a 25-44 record.10

After the 1971 season, Sadowski left professional baseball and moved to Garden Grove, California, with his wife, Theresa, and their four children. He worked for many years as a physical-education teacher at Catholic schools in Orange County, including Saint Anne School in Santa Ana and St. Columban’s School in Garden Grove. Sadowski died at the age of 62 on November 6, 1993, after a long battle with amyotrophic lateral sclerosis, Lou Gehrig’s Disease.11 He is buried in Holy Sepulcher Cemetery in Orange, California, alongside Theresa, who died in 1996.