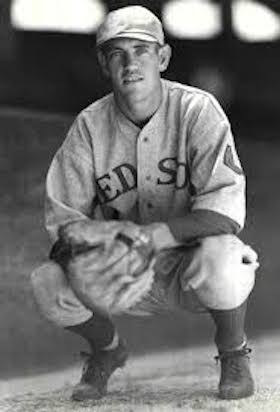 Fifteen months after the San Francisco earthquake, Henry Joseph Patterson1 was born in the city of San Francisco on July 17, 1907. His father, Henry Colquit Patterson, was a railroad switchman from Tennessee. His mother, Mary (Donohoe) Patterson, was a native of Ireland. By the time of the 1910 United States census, the family was living in Los Angeles, There seems to be a bit of travel back and forth, in that when his father registered for the draft in 1917, he – still working as a switchman – gave his address as San Francisco, working for the Union Iron Works.

Hank Patterson attended St. Mary's elementary school in the Boyle Heights section of Los Angeles for eight grades, and was captain of the Lincoln High School baseball team in Los Angeles. He was an All-City catcher for three years (1927-1929.) He played guard on the football team, was class president, and also reportedly won most of the waltz contests at Lincoln school dances.2 He seemed like the kind of guy who had everything going for him.

Patterson went to Loyola of Los Angeles, and then to St. Mary's College in Kansas for 2½ years.

At first glance, his professional baseball career appears to have been just four games long – one in the majors and three in the minor leagues. No records exist to verify the rest of his minor-league activity – if any. Scouted by the Cardinals and Red Sox while playing college and independent ball for four years, he signed with Red Sox scout Steve O’Rourke in the spring of 1931 and went to spring training in Pensacola, but immediately placed himself on the voluntarily retired list so that he could complete his studies that year at St. Mary's.3

After his application for reinstatement was accepted, he agreed to terms for 1932 and his signed contract arrived in Boston on February 3.4

He worked out with the team in spring training, and not unexpectedly was optioned on April 14 to the Hazleton Mountaineers of the New York-Pennsylvania League, a Red Sox farm team.5 Patterson was right-handed, listed at 5-feet-11 and 170 pounds. Perhaps he played fewer than 10 games; he is not included in the end-of-season listing of league batting averages as published in The Sporting News.

Under manager Shano Collins, the Boston team had finished in sixth place in 1931, breaking a stretch of six consecutive last-place finishes that ranged from 1924 through 1930. Collins only lasted for the first third of the 1932 season; the team was off to a dismal 11-44 start when he was replaced in mid-June by Marty McManus. The team lost its next five games, too. They were, perhaps needless to say, in last place – as they were every day all season long from the seventh game of the year.

It's not clear what Patterson did during the 1932 season and why he impressed the Red Sox enough to bring him to Boston. He appeared in just one big-league game, the second game of a doubleheader in Washington on September 5, 1932. Bennie Tate was the starting catcher for Boston. The Red Sox had lost the first game to the Senators, 6-2. They were losing the second, 9-3, and Tate may have been tiring; he was 1-for-6 on the day. The team was 37-97 after the first game, a full (and somewhat mind-boggling) 57 games out of first place. McManus no doubt figured there was no point wearing down Tate any further. So Patterson was given a look. He was the fifth catcher the Red Sox had tried out in 1932.

He was 0-for-1 at bat, and seemed to have done well enough behind the plate. No runs were scored on his watch. It was the only look he got in major-league play.

With just the one plate appearance, Patterson's career record in the major leagues shows him with a batting average of .000 and, without a fielding chance in his two innings of work behind the plate, a fielding percentage of .000.

Still under contract with the Red Sox, Patterson was sent on option to the Hollywood Stars of the Pacific Coast League on January 16, 1933.6 Patterson played with Ossie Vitt's Hollywood team in the early springtime, but was released in mid-April. The team's idea had been to send him to Albuquerque, but “the proposed West Texas League blew up,” leaving him without a team.7 When the Boston Red Sox truly cut him loose is unknown. It seems that he sought work outside of professional baseball at this time.

At the end of June 1935, Patterson married Bernardine Ann Farrow, who bore him a son, Henry S. Patterson, before she died in 1943. In June 1946, he married again, to Charlotte Joann Goebel.

Patterson worked as auto maintenance superintendent and then construction equipment superintendent of the Los Angeles Department of Water and Power Company, serving with the company for 37 years in all. He was working for the company at the time of his death of a heart attack on September 30, 1970, at the Kaiser Foundation Hospital in Panorama City, California. His wife Charlotte survived him.