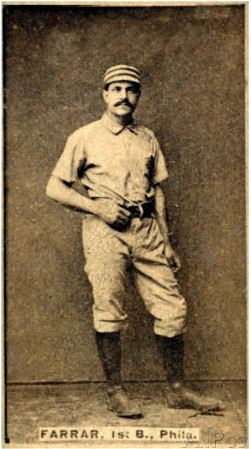 Sid Farrar was living in Melrose, Massachusetts, in 1882, working winters in a box factory and singing in the church choir when his wife, the former Henrietta Barnes, gave birth to a daughter Geraldine. At age 3, Geraldine was already singing with her darkly handsome father in the Melrose choir; 18 years later she created a sensation in Berlin with her debut as Marguerite in Charles Gounod’s Faust and afterward was renowned as the “It” girl of the opera until her abrupt retirement in 1922 at the age of 40. At the height of her career, her striking beauty, enchantingly lyrical voice and faultless stage presence earned her such a fanatical following, particularly among young women, that her worshippers were nicknamed “Gerry-flappers.” Meanwhile, her tempestuous love affair with Arturo Toscanini and her subsequent marriage to the nefarious film actor Lou Tellegen were the sources of considerable scandal. After she divorced the philandering Tellegen in 1923, she tried to keep her personal life out of the public eye, only to have the lurid circumstances of her relationship with Tellegen dragged back into the headlines by his bizarre suicide in 1934 when he stabbed himself in the chest seven times with a pair of scissors, reputedly while surrounded by mountains of newspaper clippings of his controversial career. Geraldine Farrar Tellegen, who never used her married name anywhere but on legal documents, never remarried.

In the spring of 1883, when Geraldine was less than a year old, her less famous father, a dark-horse candidate at best, won the first-base job on the Philadelphia Quakers, a NL replacement for the abandoned Worcester franchise. Born in Paris Hill, Maine, on August 10, 1859, the righty-throwing Farrar had been active in the game since 1876, when he played with the semipro General Worth team of Stoneham, Massachusetts, in the Eastern Massachusetts Association, but had never been among the more prominent minor-league or independent-team first basemen prior to signing his first major-league contract. Indeed, except for a note in the New York Clipper that he was back playing in Stoneham in 1880, his baseball movements between 1886 and his major-league debut on May 1, 1883, at Philadelphia (he went hitless in a 4-3 loss to Providence’s Charley Radbourn) remain almost entirely shrouded in mist. Farrar hit just .233 as a rookie and scored only 41 runs in 99 games. Just once in the remaining seven years of his major-league career did he hit better than .268, but he nonetheless held the Quakers’ gateway post until 1890, when he jumped to the Players League. He finished his career there as the owner of the lowest OPS (.647) among all first basemen in the decade of the 1880s (1881-90) with a minimum of 2,000 plate appearances.

Farrar’s only offensive season of even moderate merit came in 1887, when he hit .282 and scored 83 runs. He was a mediocre baserunner. His fielding, although sound, was hardly electrifying –he led NL first basemen just once each in fielding average, assists, and double plays. Farrar’s greatest strengths were that he kept his head in the game at all times and was regarded as a clean player, attributes that often were enough to keep a job for quite a while under Harry Wright, his manager in every season but his first and last. Farrar may have been the only major leaguer, however, whose career was saved by the Players League – at least for one more year. Reportedly Wright had ticketed him for release after the 1889 season to make room at first base for Ed Delahanty, who had been a failure prior to then at every position Wright tested him at.

Farrar’s most intriguing contribution to the game came in July 1890, when he proposed that all cities with representatives in both the Players League and the National League arrange for their teams to play a series whose loser would then have to vacate the city, leaving it to the winner alone. His notion frightened almost every National League owner, since the majority of National League teams with rivals for their territory in the Players League produced a vastly inferior product in 1890. When Farrar tried without success to convince Columbus of the American Association after the Players League collapsed that he would be a better bet than the Senators’ incumbent first baseman, Mike Lehane, the Philadelphia Press had this to say: “Farewell, Sidney, we will probably never see a man on the Philadelphias at first base that can field the position better or run slower.” Farrar spent the 1891 campaign with New Haven of the Eastern Association and fashioned the only documented .300 season of his pro career when he rapped .312. The following year he moved with his New Haven manager, Walter Burnham, to Providence of the Eastern League and left the game after he slipped to .284. Farrar later went into the furniture business in Melrose with the Boston Beaneaters’ manager, Frank Selee, and then bought a turkey farm near Ridgefield, Connecticut. After his wife died in 1923, he regularly traveled with his famous daughter, even abroad to places like Berlin to watch her give emeritus performances. For his 70th birthday in 1929, the August 12 edition of the Montreal Gazette reported, Geraldine came home from Europe specifically to organize a gala celebration at his Ridgefield home that numbered all “the old cronies of his diamond days.”

When Farrar died on May 7, 1935, in New York City, some four months after an unsuccessful surgery, he left Geraldine an estate worth $80, 900. In her later years she grew increasingly disenchanted by modern opera and never sang in public, although she would occasionally perform for friends. By the 1950s, Geraldine Farrar had become an exemplar for J.D. Salinger. She lived in total seclusion on the family farm in Ridgefield and refused to be interviewed. In 1967 she died from a heart attack at the age of 85. Her less famous father is buried in Fernleaf Cemetery in Hartsdale, New York, and remains something of an enigma himself. Unlike most first basemen of his era, who were known for their bat work, Farrar’s reputation rested much more heavily on his fielding. Consequently, he was never portrayed either in baseball cards or photographs with a bat in his hands, and it is still a mystery whether he swung from the right or left side, or even conceivably from both.

This biography is an expanded version of one that appeared in David Nemec's Major League Baseball Profiles: 1871-1900, Volume 1 (Lincoln: Bison Books, 2011).

In assembling this biography I made extensive use of the New York Clipper, Sporting Life, and The Sporting News throughout Farrar’s professional baseball career, 1876 through 1892. For details of his daughter’s professional and personal life I utilized the Internet. Farrar’s major- and minor-league statistics came from baseball-reference.com.