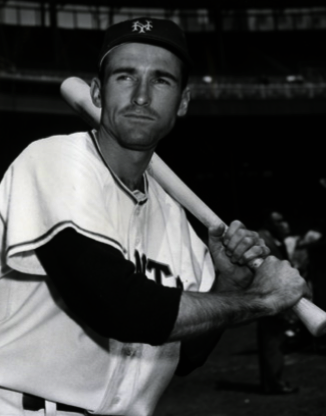 On April 15, 1947, in Brooklyn, New York, an African American player took the field in a major-league baseball game for the first time in the modern baseball era. In descriptions of Jackie Robinson’s arrival, there is rarely mention of another rookie who debuted for the Brooklyn Dodgers that afternoon, a third baseman who batted seventh and wore number 21, Spider Jorgensen.

John Donald Jorgensen was born on November 3, 1919, in Folsom, California, near Sacramento. He was the seventh child (along with two sisters and four brothers) of Walter and Winifred (Carney) Jorgensen. Walter, the son of a Danish-born father and Irish-American mother, was a California-born dredge operator in the Sacramento River delta. Winifred, also born in California, was the daughter of Irish immigrants. There is little documentation regarding Jorgensen’s early life or scholastic athletic career. At Folsom High School, from which he graduated in 1936, John acquired the nickname Spider. In the June 1998 issue of Baseball Digest, sportswriter Phil Elderkin wrote that the nickname came from a pair of black shorts with an orange stripe down the side that Jorgensen wore playing basketball. “The weekend before, a teacher had been cleaning out a woodshed and had to kill a black widow spider,” Jorgensen related. “When he saw me, he told everyone I reminded him of the spider.”

A proposed scholarship to study business at the University of Santa Clara fell through, consequently Jorgensen spent two years at various jobs in Sacramento and playing baseball in the semipro Sacramento Winter League. In 1939, and again in 1941, he played baseball at Sacramento City College. A second baseman when he entered college, he was moved to third base when the team’s regular third baseman was injured.

In 1940 Jorgensen participated in a Dodgers’ tryout camp run by scout Tom Downey in San Mateo, California. He performed well enough that, in 1941, after he had finished at Sacramento City College, scouts Downey and Bill Svilich persuaded him to sign a contract with Brooklyn. The twenty-one-year-old left-handed-hitting infielder was assigned to the Dodgers’ Santa Barbara team in the Class C California League. There, in his first pro season, Jorgensen appeared in 140 games and batted .332 with nine home runs and forty-three doubles. He also made forty-eight errors at third base, but still was named the league’s Most Valuable Player as Santa Barbara won the league championship.

The Japanese attack on Pearl Harbor put Jorgensen’s career on a four-year hold. On February 17, 1942 he enlisted in the US Army. He was assigned to the Army Air Corps, and during the war reached the rank of technical sergeant, while serving at duty stations in Idaho, Arizona, and Texas. In Texas he met Lenore Jones and married her in October 1946. In addition to Lenore’s two children from a previous marriage, the couple had a daughter, Jonel. Spider and Lenore remained married until her passing in 1995.

Jorgensen was discharged in 1945, and in 1946 he reported to the Class AAA Montreal Royals, the Dodgers’ affiliate in the International League. At Montreal Spider became part of an infield that included Jackie Robinson at second, and future Dodgers general manager Al Campanis at shortstop. Jorgensen hit .293 in 117 games with the Royals.

After spring training in Cuba in 1947, Jorgensen assumed he was heading back to Montreal. But injuries to veteran infielders Cookie Lavagetto and Arky Vaughan forced the Dodgers to keep him. Jorgensen told writer Phil Elderkin, “I came into Ebbets Field on Opening Day, scared to death. I didn’t think I was going to play. I didn’t have any equipment with me. My glove, bats, everything else went to Syracuse because the Montreal club opened up there. Then Jackie comes over and says ‘Here, use my second base glove.’ He was going to play first base. So I used his glove and borrowed a pair of spikes and I’m in the lineup. So I really didn’t have time to get nervous.”

Spider logged a walk and an RBI in three at-bats that day. Two days later, on April 17, he had what proved to be one of his best days in the majors, driving in six runs on a home run and two doubles. In the twenty-seven-year-old rookie’s only major-league season as a regular, he played 128 games at third base and hit .274, with twenty-nine doubles and eight triples. Dan Daniel, writing in the August 13 edition of The Sporting News, called him the “best of the hot corner rookies.” Jorgensen played in all seven games in the World Series loss to the Yankees that fall, getting four hits with three runs batted in.

During the winter the five-feet-nine, 155-pound Jorgensen bruised his arm—due to the recoil from a hunting rifle—and then damaged it permanently by throwing too aggressively in spring training. In April manager Leo Durocher told The Sporting News not to be surprised if Jorgensen was his starting third baseman again in 1948. But, most likely due to the sore arm, Jorgensen started the season as a reserve and was replaced at third base by the newly-acquired Billy Cox.

Jorgensen was left in St Louis on June 5 after a series with the Cardinals for further testing of his arm and shoulder. He did not get into any more games and within two weeks the Dodgers sent him to their American Association farm team in St. Paul. It was the beginning of the end of Jorgensen’s major-league career. While he had hit .300 in thirty-one Dodgers games in 1948, he appeared in only 107 major-league games after that season.

Spider was a Dodgers reserve in 1949, and he played in his second World Series that fall, hitting just .182 (2-for-11) with two doubles. On May 17, 1950, after appearing in only two games, the Dodgers sold Jorgensen to the New York Giants for what The Sporting News described as likely well over the $10,000 waiver price. The thirty-year-old infielder played in twenty-four games for the Giants with five hits in thirty-seven at-bats. He also played in sixty-four games for the Class AAA Minneapolis Millers, batting .330 in 215 at-bats.

Spider played his final game in the majors on June 30, 1951, flying out as a pinch-hitter. The next day the Giants traded Jorgensen, hitting just .235, and pitcher Red Hardy to the Oakland Oaks of the Pacific Coast League for outfielder Earl Rapp.

Between 1951 and 1955, Jorgensen played third base, shortstop, and the outfield for the Oaks under managers Mel Ott, Augie Galan, Charlie Dressen, and Lefty O’Doul. In 1956 the Oakland Oaks moved to Vancouver to become the Mounties, a Baltimore Orioles farm club. Spider continued to parlay his reliable defense and sufficient offensive skill into three more years of professional baseball. His regular playing career ended after the 1958 season, but the 39-year-old returned to the Dodgers family the next year as a spring-training mentor, and then coached for the Mounties during the season.

His skill in dealing with younger players garnered positive attention, so in 1960 Spider was named player-manager (although he played in just four games) of the Dodgers’ Great Falls (Montana) Electrics in the Class C Pioneer League. The next season Jorgensen dropped a level to manage the Artesia (New Mexico) Dodgers of the Class D Sophomore League. That league was a purely instructional entity and Jorgensen remained at that level in 1962, shifting within the organization to the St. Petersburg Saints of the Florida State League.

After the 1962 season with St. Petersburg, Jorgensen left professional baseball and returned to his home in Sacramento. However, he could not stay away from the sport. Although unpaid, he put his knowledge and experience to work coaching amateur baseball, serving as head coach of the Fair Oaks American Legion team, a squad that won the Legion North Division championship in 1967. Jorgensen may have had more raw talent on that Legion team than on any of the three minor-league teams he had managed, as the squad was led by future major-league star, Dusty Baker. In a 2004 book, How To Be Like Jackie Robinson, Baker, by then manager of the Chicago Cubs, was quoted as saying, “In all the time he coached us, I never knew Spider played for the Dodgers. I knew he was a terrific coach, but he never once mentioned he was a former player.”

In 1969 Jorgensen returned to professional baseball as a scout and spring-training instructor for the Kansas City Royals. As a scout, he was directly responsible for signing future major leaguers Greg Minton, Doug Bird, and John Wathan. He also had a stint of sixty-nine games managing the Royals’ Winnipeg Goldeyes in the short-season Northern League.

After Kansas City Jorgensen scouted for the Philadelphia Phillies for a few years, and found pitcher Bob Walk, among others. As a scout for the Chicago Cubs, he persuaded the team to draft Mark Grace, who proved to be one of the finest hitters of the 1990s.

Years later, in an obituary written by Jim Gazzolo, others commented on Spider’s scouting ability and on his character. "I don't think there is a person in the world who didn't love him," Ontario High baseball coach Bob Beck told Gazzolo. "To my knowledge, he didn't have an enemy in the world. He had an unassuming manner about himself. He was just very friendly, accommodating, but he didn't miss a trick. He always knew what was going on."

In 1996 Jorgensen was a member of the first group of inductees into the Sacramento City College Athletic Hall of Fame. A baseball man to the end, Jorgensen was still scouting locally for the Cubs when he died on November 6, 2003, at San Antonio Hospital in Rancho Cucamonga, California, three days after his eighty-fourth birthday. He is inurned at Lakeside Memorial Lawn Cemetery in Folsom, California.