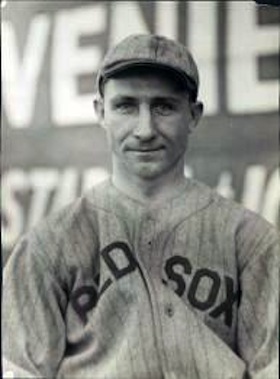 Catcher Al Stokes “was one of the hardest workers a Rockford team ever had.” So wrote the Rockford (Illinois) Republic of his debut in the major leagues.1 It was a nice expression of appreciation and a nice way to be remembered for a couple of years of service for the local team. Stokes had caught for the Rockford Rox in 1922 and 1923.

Stokes – born as Albert John Stocek – began his pro career in Michigan with Muskegon in 1920. He’d been signed by Doc White, manager of the Central League team, in January 1920, and by April 30 the Muskegon Chronicle raved a bit, calling him “one of the best young catchers in Class B baseball today.”

Stokes was a Bohemian. He was indeed born to Bohemians, on January 1, 1900, to Frank Stocek and Theresa (Prucha) Stocek. Both were natives of Bohemia (later part of Czechoslovakia), Frank arriving in the United States in 1871 and Theresa, 19 years younger, arriving in 1885. Albert was the first of their children. Frank was a stonemason, a bricklayer.

Al Stokes never changed his surname. In completing his player questionnaire for the National Baseball Hall of Fame, he signed it: Al “Stokes” Stocek. He indicated that his nickname was “Stokes-y.” (Two major websites, Baseball-reference.com and Retrosheet.org, refer to him as Stokes.)

Albert completed eight grades of elementary school and one of high school and then left formal education and took up work as an electrician; he reported working at that trade for John Hoffman of Chicago at the time he registered for the military draft in September 1918. He was never called to the service.

He did play ball in Chicago, initially as a 15-year-old on Saturdays for the Hoffman Electrics in the Chicago Electric League in 1915. He added Sundays to his baseball schedule in 1916, playing for the Planets. In 1917 he joined Jimmy Ryan’s Romeos, a semipro team in Chicago.

It was apparently as a Romeo that Stokes caught Doc White’s eye. He had some competition during Muskegon’s spring training, but won the starting slot behind the plate. He appeared in 85 games, batting .226 – considered quite adequate for a catcher at the time – and was solid defensively behind the plate. A number of injuries had cost him playing time.

There were only four teams in the league; Muskegon finished fourth. The team names were interesting: The Grand Rapids Joshers won first place, followed by the Kalamazoo Celery Pickers, the Ludington Mariners, and the Muskegon White Hopes. (The team took its name from manager White, rather than necessarily reflecting any racial humor.) The White Hopes became known as the Muskies in 1921; Davey Claire was the manager. Stokes was expected to be “the backbone of the battery”2 in 1921, but he is listed as playing in only eight games (and batting .048) and was released before the month of May was complete.3 No doubt manager Claire was surprised to learn that he made the major leagues four years later.

Stokes played some for Terre Haute, but a note in the Rockford paper in August said that he had been released by Terre Haute and would likely return home to Chicago.4 Instead, it appears he played for a while with the “Bunnies” – the Cedar Rapids Rabbits. Terre Haute, Cedar Rapids, and Rockford were all teams in the Three-I League. He played in 40 games in the Three-I League in 1921, batting .154. And yet Rockford sought him out for 1922, as a backup; even though he was noted as a “very weak batter,” it was felt that he “might fill the bill for a time at least” as the second-string catcher.5 Perhaps he wasn’t that good defensively, either: the Rockford Republic noted that out of 18 catchers in the league in 1921, he had finished 17th.6

Apparently Stokes determined to make the most of such opportunity as he was given. He even filled in when needed and played first base a time or two. Because of his lack of offense, he was pulled for pinch-hitters more than once. And by the end of June, he’d already been looked at by one big-league scout who predicted that all he needed was a good year or two in the minors and then he’d be ready to play big-league ball.7 He hit .221 for the season, with three home runs.

Rockford had several offers for Stokes after the 1922 season but decided to keep him.8 He played in even more games in 1923 and boosted his batting to .238, again showing some versatility by filling in at shortstop. He had a little speed and deception, too, stealing home in a May 5 game against Peoria. His gritty play helped him win fan support, and he suffered both spikings and some damaged fingers during the course of the season. At the end of July, Stokes was out for two or three days due to a spiked finger from a close play at the plate, then suffered another sort of injury: He went out his hotel window to retrieve his uniform which he had placed on the fire escape to dry, and stumbled and fell down one story, spraining his knee.9

In mid-August Boston Red Sox scout Rudy Hulswitt wired Rockford asking for their price on Stokes’s contract.10 An agreeable price was found and on August 31 owner Bob Quinn announced the purchase of more than one player’s contracts, Stokes’s among them.11 “Errors and Stokes have been strangers throughout the season,” wrote the Republic. “Always careful of his physical condition, he trains diligently and is one of the huskiest players in the Three-Eye League.”12 Stokes was 5-feet-9 and weighed 175 pounds.

The baseball meetings were held in Chicago that December and Stokes met with Quinn and manager Lee Fohl.

He went to spring training with the Boston team, in San Antonio. He didn’t make the team, and was placed with Milwaukee for the 1924 season and on June 19 it was announced that he had been sent to play with Mobile. He hit an even .250 in 40 games.

In 1925 Stokes joined Boston again, in New Orleans, for spring training. This time he made the team. His debut was on May 10 against Detroit. Stokes was 1-for-2 with an RBI. He had just the one experience in May, and one more in June. He played in five July games, three August games, and seven in September. The only run Stokes ever batted in had come in his first game. After all 17 games, he was batting .212, but with seven runs scored.

One of his most interesting moments came in the August 25 game against Detroit. Detroit’s Fred Haney was on first and Johnny Bassler on second. Topper Rigney hit a fly ball, but Boston’s Ira Flagstead dropped it. Haney had started running hard at the crack of the bat; Bassler had held up, taking off only when he saw the ball hit the ground. Haney, the faster runner, had to slow down to accommodate Bassler but was truly hard on his heels as the pair approached the plate. Both players slid at the same time as Stokes took the relay, “and with one sweep of his arm tagged them both before their spikes touched the rubber. Not to be outdone, the umpire shot both arms upward, indicating the double play.”13

The Red Sox added veteran catcher Alex Gaston for 1926. He and John Bischoff got most of the work, but Stokes appeared in 30 games. He hit only .163, however, and struck out 28 times in 86 at-bats. He drove in six runs, half of them in one game thanks to a bases-clearing triple during a 14-12 loss to Washington on September 1. The triple served as a bit of a rebuke to the fans at Fenway Park who were clamoring loudly for Ramon Herrera to pinch-hit for him. His previous time up had been with the bases loaded, too, but that time he grounded into a double play.

On September 23 Stokes was traded to St. Paul, released without strings. He was essentially the player to be named later in a deal that secured Pee-Wee Wanninger and Fred Hofmann for the Red Sox.14 Oddly, though, a story that ran in late December said he had been sold, by Boston, to the Pacific Coast League’s San Francisco Seals.15

Stokes played one more year, with the San Francisco Seals in 1927. He appeared in 29 games, batting .121 (7 hits in 58 at-bats) with two home runs and eight runs batted in.  It was his last year playing professional baseball.16

On September 12, 1928, Albert Stocek married Mae Ruzak. They had one child, a daughter named Joyce, who later became Joyce Mathis in marriage.

Baseball was in his blood, and he returned to play semipro ball in 1930, joining the Chicago Mills team and then semipro teams in Racine in the Wisconsin-Illinois League. Stokes coached and managed until 1937, when he again retired. He wasn’t always a catcher; indeed, he was very versatile. As he said regarding semipro baseball, “If you didn’t play all positions on the team, you just didn’t play.” He added, “I sure did a lot of catching in my day and have a handful of broken fingers to prove that fact.”17

Stokes kept in touch with baseball and was active in the Old Timers’ Baseball Association, even being an honored speakers’ table guest in his native Chicago in 1963. “Once you are in the game, you never really get out of it,” he said, and “Uncle Al” was very active in Little League coaching.

He continued to work for the Hoffman Electric Company in Chicago and rose through the ranks to become general superintendent.18

In 1969 Baseball Hall of Fame historian Lee Allen reported conflicting information regarding Stokes’s death – based on second-hand information from a reader.19

A still-living Stokes was honored at Fenway Park on August 21, 1984, with the opportunity to throw out the ceremonial first pitch.

Though retired and residing in Wilton, Connecticut, he was visiting his daughter Joyce’s family in Grantham, New Hampshire, when he died there on December 19, 1986.

In addition to the sources noted in this biography, the author also accessed Stokes’s player file and player questionnaire from the National Baseball Hall of Fame, the Encyclopedia of Minor League Baseball, Retrosheet.org, Baseball-Reference.com, and the SABR Minor Leagues Database, accessed online at Baseball-Reference.com. Thanks to Dick Beverage.

16 So Stocek-Stokes reported on his Hall of Fame player questionnaire.