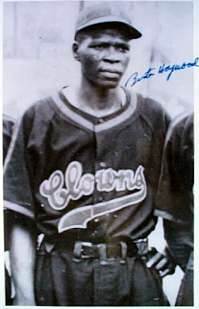 Albert Elliott Haywood was born in Whaleysville, Virginia, near Norfolk, on January 12, 1910, the son of Robert E. Haywood and Mary Goodman. He had one older sister, Sarah (White). Albert’s mother was a hospital dietician. His father worked in the shipyards at Portsmouth. His father lost his job when Albert was 16, so Albert worked odd jobs to help support the family.1 He attended I.C. Norcom High School, the first high school in the region for black students. According to family members, his parents did not want him to play baseball as a profession. But in 1932 the name “B. Haywood” began to appear in newspaper box scores as the second baseman for the Grays of the Belleville Industrial School, also known as the Saints and later as the Belleville Grays. Haywood played for and traveled with the team from 1932-1939.

The Belleville Grays formed in the 1920s as part of the Temple Beth-El community of Hebrew Israelites, a religious group of African Americans that lived communally on a large plot of land near Norfolk known as Belleville and understood themselves as descendents of the lost tribes of Israel. It is not clear what Haywood’s exact affiliation with the community was. He did not live in Belleville or attend the Industrial School. But later in life he referred to the group’s leader, Howard Z. Plummer as “the minister at my church” and he retained a connection to Belleville through family members who were close to the Plummer family.2 Evidence suggests that Haywood was in some way a part of this group and abided by community rules, which included no smoking or drinking. Buster would have most likely have kept his affiliation as an Israelite hidden. Temple Beth-El maintained a high level of privacy about their unique religious practices, which set them apart from the mainstream of the African American community in the Norfolk area.

Haywood switched to catching and played that position for the rest of his career. He is listed in box scores as the catcher for the Grays, the Berkeley Black Sox, and the Portsmouth Firefighters and occasionally as a participant in foot races between games of a doubleheader throughout the 1930s.3 It was while playing for the Firefighters in 1933 that Buster met the future Hall of Fame first baseman Buck Leonard. In his autobiography, Leonard credits Buster with cautioning him against leaving the steady opportunities in Portsmouth to try out for Ben Taylor’s Baltimore Stars.4 Yet Buster was himself enticed to seek more competitive opportunities, and in 1935 he traveled to Jacksonville, Florida, to try out for a new professional team that would become part of the Negro National League, the Brooklyn (later Newark) Eagles, owned by Abraham Manley and managed by the same Ben Taylor. Buster played a few games with the team, but ultimately Taylor judged Buster to “need a little seasoning” so Buster returned to Portsmouth.5

Buster started the 1940 season with the Black Barons, sharing the catching duties with Oscar Boone. Although the Barons played at a more competitive level, the salaries they offered did not compete. In search of better wages, he left the Barons by mid-May to join the Miami Ethiopian Clowns.6

The Clowns did better financially, but at a price. When Buster joined the team in 1940 the Clowns played in white face, sometimes in grass skirts, and players were known by “African” pseudonyms. In his first two years as a Clown, Buster played under the name “Khora” and often hit and ran the bases in his catching equipment.7

“The thing was to draw people. The Negro leagues weren’t drawing. The Monarchs were. The Grays and Elite Giants did okay. But the Clowns outdrew every team in both leagues. We brought money and good baseball into the league, and that was our purpose, and the critics can say whatever they want about that.”8

Haywood became a popular and solid performer. In 1941 the Clowns won the Denver Post Tournament, a semipro tournament that had permitted black teams to play beginning in 1934. Haywood was named the 1941 tournament’s Most Valuable Player by the Denver Post columnists and received a Gruen-Curvex watch as a prize. The Post reporter commented, “I’d give Babe Ruth and Ty Cobb in their primes plus $100,000 for Haywood Khora.” 9 Negro League owners took notice.

In October of 1941 Ed Bolden sent Haywood a letter inviting him to play for the Philadelphia Stars.10 In March of 1942 the Pittsburgh Courier reported that Alex Pompez, owner of the Negro National League New York Cuban Stars, enticed five of the Clowns’ best players to join his team, including Buster Haywood.11 Haywood played for the Cubans for the 1942 league season. Although he got good notices for his fielding and hitting in the black press that year, Haywood shared the catching with several others, did not get significant playing time or satisfactory wages, and the Cubans finished the season with a losing record, 8-14, next to last in the league.

Haywood returned to the now Cincinnati Clowns in 1943 after the team officially joined the Negro American League. He was no longer required to participate in the comedy routines, and his hitting improved dramatically. He led the team with a .411 batting average in July and hit safely in 27 straight games.12 When the Clowns moved their home base to Indianapolis in 1944 Haywood was named to the Negro American League’s All-Star roster for the East-West game. He was again mentioned by national columnists in the black press as “among the top catchers in the Negro Leagues.” 13

From 1945 to 1947 he was the catcher for the California Winter League team, the Kansas City Royals. Haywood was named the league’s all-star catcher in 1945.14 Jackie Robinson also played on the Royals that year prior to signing with the Brooklyn Dodger organization. To create publicity for the Robinson signing that winter, the Dodgers commissioned a story with photographs in Look magazine. The story was never published, but baseball researchers found it four decades later. They discovered that to stage the secret photos, Robinson asked two of his teammates on the Royals to accompany him to San Diego’s Lane Stadium. One of them was Buster Haywood. In later years, Haywood played on Jackie Robinson’s barnstorming all-star teams in the off season.15

During the regular season Haywood continued to play baseball for the Clowns. In 1948 he started the year as field captain and then assumed the job of player-manager. Under Buster’s leadership the Clowns won the Negro American League championship three times. His managerial duties included occasionally driving the Clowns’ bus (he had a chauffer’s license) and making team travel arrangements.16 He also had the task of handling the comedy acts, work that required great diplomatic skill dealing with artistic temperaments of the performers.17

In 1952 eighteen-year-old Hank Aaron was recruited to play for the Clowns, and Haywood is best known in Negro League history as Aaron’s first manager. Although owner Syd Pollock is often given credit for discovering Aaron, umpire Bob Motley claimed that Haywood made the discovery.18 When he was interviewed for a TBS documentary about Aaron, Chasing the Dream, Haywood concluded the conversation with his oft quoted remark “God done sent me something,” shorthand for expressing awe at Aaron’s abilities.19

Nineteen fifty-three was Buster’s last year as the Clowns manager. By this time the Negro American League had shrunk to only four teams. To attract attendance, the Clowns hired Toni Stone to play second base. Buster had made his peace with white face and grass skirts, clowning routines, and the evils and hardships of Jim Crow segregation. But he could not accept the idea that a woman had the ability to play for the team he managed. What in a contemporary context might look like gender equality was a mark of disrespect to the black ball players of the era. Buster decided to leave the Clowns after the 1953 season. He did not reveal his reason for leaving, although in later years he made it clear that he went to the Memphis Red Sox the following year to be on a team where “men were men and women were spectators.”20 He ended his baseball career as player-manager in 1954.

Haywood moved to Southern California in 1950. He met Theola Haskins in 1953 and married her in 1955. They had no children of their own, but they raised Theola’s younger siblings.21 He worked as a maintenance engineer at Hughes Aircraft in El Segundo until he retired in 1985 and then came out of retirement to work until 1992, finally leaving for health reasons at age 82.22 He was a regular participant in interviews and reunions of Negro League veterans until his death on April 19, 2000. He was buried in Inglewood Park Cemetery, Inglewood, California.