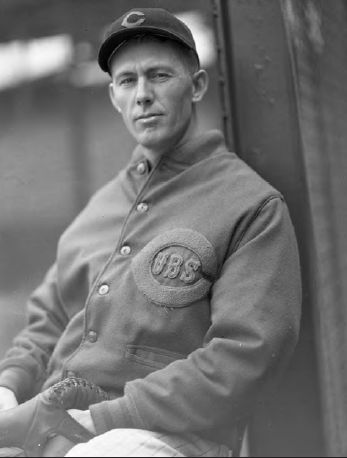 Bob Osborn was a right-handed pitcher for the Chicago Cubs and the Pittsburgh Pirates in parts of six seasons from 1925 until 1931.  A spot starter and reliever in 1926 and 1927 for the Cubs, Osborn spent all of 1928 and most of 1929 in the minor leagues before Chicago made him a late-season call-up during its exciting pennant run in the latter year.  He pitched only three times for the North Siders in 1929 and was not on their World Series roster.

John Bode Osborn was born on April 17, 1903, in San Diego (Duval County), Texas, the son of Adolphus, a railroad conductor, and Lillian Bode Osborn. By 1923 he was playing for the Wichita Falls Spudders of the Class A Texas League, part of the Cubs organization.  He didn’t have a very stellar season that year.  He won two games and lost five, gave up 56 hits and 22 walks in 52 total innings, and finished the season with an earned-run average of 4.67.

Despite this rather lackluster showing, the Cubs gave Osborn a look in 1924, but by April 7 he had been sent back to Wichita Falls with outfielder Marty Callaghan and infielder Pete Turgeon in exchange for shortstop Ralph Michaels.1 He won 13 and lost 17 that year, with an ERA of 4.39.  He was also with Wichita Falls for most of the 1925 season, winning 16 and losing 10, and posting an ERA of 3.94 before being called up by the Cubs in mid-September. Osborn’s major-league debut came on September 16, 1925, when he appeared in relief during the second game of a doubleheader against the Boston Braves.  He pitched the sixth and seventh innings, and gave up six hits and two runs.

In March 1926 Osborn spent spring training with the Cubs, and this time he made the team. He had trouble with his control during the season, giving up large numbers of hits in the majority of his appearances. He was also walking too many batters, sometimes averaging a walk an inning.  On June 27 he gave up ten walks in 9⅔ innings. On September 5, he gave up 11 hits, one walk, and six runs in just 5⅔ innings and left the game with the Cubs trailing, but was awarded the win under the scoring decisions of that era. He pitched in 31 games that year, starting 15 of them, and had a won-lost record of 6-5.  In the course of 136⅓ innings he gave up 58 walks, but ended the season with an ERA of 3.63, the lowest mark he posted in a full season during his major-league career.

Osborn was back with the Cubs in 1927.  On May 17 in Boston, he took over the mound against the Braves in the ninth inning. The game went on for 22 innings, with the Cubs coming out on top, 4-3.  According to the Miami News, “Bob Osborn was the hero of the 22-inning struggle.  He took the box for Chicago in the ninth and held the Braves to six hits.  For 14 innings — from the seventh to the 22nd, the rivals battled without a score. Not a hit went for more than two bases.”2  Osborn appeared in 24 games during the season, starting 12 of them, and completing two.  He ended the season with a 5-5 record and an ERA of 4.18.

On March 30, 1928, the Cubs traded Osborn and an outfielder to be named later to the Los Angeles Angels of the Pacific Coast League for infielder Ray Jacobs.3   He pitched in 26 games (120 innings) for the Angels, winning five and losing nine. His ERA was 5.70.   The following February, the Cubs bought Osborn back from Los Angeles, but by April 1929 he had been sent on option to the Reading Keystones of the International League.4  He didn’t pitch well for the Keystones, and by June 5 he had lost five in a row.5  By mid-August his record was 8-11.6  After pitching in 34 games (182 innings) for Reading, he was called up by the Cubs for the final weeks of the season.  His record at Reading was 11-14, with an ERA of 4.10.

When Osborn was called up from Reading, the Cubs were in the midst of a pennant race.  During the remainder of the season, he pitched in three games (nine total innings) for the Cubs, starting only one.  He appeared in relief in the last inning of a 9-6 loss to the Brooklyn Robins on September 17.  He pitched one inning as a reliever during a 7-3 loss to the New York Giants on September 18, giving up two hits and one run.  He started against Cincinnati on October 4, pitching seven innings and giving up six hits and two runs in a 6-3 Cubs extra-inning victory.  During the offseason, Osborn returned to live with his mother, Lillian, in El Paso, Texas.

By March 1930 Osborn was back at Cubs training camp.  One sportswriter noted that he had “had several tryouts and … is long over due.”7 By May, Cubs manager Joe McCarthy was reportedly worried about his pitching staff.  He was carrying a roster of 12 pitchers, seven of them rookies, and had to make final cuts by June 15.  By that time Osborn had started four games for Chicago and had appeared as a reliever in nine others.  He remained on the roster and, according to sportswriter John B. Foster, he had “come up to snuff for the Cubs.  The big fellow always had enough strength to eat six meals a day.  He had been too wild to get much out of him.  This year he has won five games for his club and lost only one to the Phillies.  Those five games are worth a heap to the Cubs right now.”8  By July 19 Osborn’s record was 8-1, which ranked among the best in the National League.9  On August 28 Osborn came in during the ninth inning and pitched until the end of a marathon 20-inning loss to the Cardinals.  On September 1 he gave up five hits, the fewest of his career in a complete game, in a losing effort against Cincinnati.  By the end of the 1930 season Osborn had appeared in 35 games (126⅔ innings), 13 of which he started.  His record was 10-6, and his ERA was 4.97.

Despite this promising season, on April 22, 1931, Osborn was sold to the Pittsburgh Pirates.  This move caused some surprise in baseball circles because “[t]he young hurler did fine work last year for the Cubs and appeared destined to star in the senior loop, but he being unable to reach form this year, was allowed to go.”10  Pirates manager Jewel Ens had high hopes for Osborn, especially because pitchers Ervin Brame and Remy Kremer were “out with illness,” and Steve Swetonic had an injured elbow.11 The Pirates used Osborn mostly as a short reliever, and by June he had three wins and no losses, which one sportswriter declared “good enough for him for the time being.”12 He played his final major-league game with the Pirates on September 24, 1931.  He appeared in 27 games (64⅔ innings) during the season, starting only two.  He ended the season with a record of 6-1 and an ERA of 5.01, and his six wins in relief led the NL.

On January 29, 1932, the Pirates traded Osborn and catcher Eddie Phillips to the Kansas City Blues of the Double-A American Association, part of the Cardinals organization, in exchange for pitcher Bill Swift.  Commenting on the trade, sportswriter Fred Wertenbach went so far as to call Osborn “the colorless Bob Osborn.”13  Pirates manager George Gibson said that he hated to let Osborn go: “I wanted to keep Osborn. But I also wanted Swift, and the Blues wouldn’t listen to a trade unless I gave them Osborn.”14 Osborn never made it back to the majors. He finished with 121 career games, starting 43 of them, and logged 446 innings.  His record was 27-17, and his ERA was 4.32.

During 1932 Osborn played for both the Blues and the Columbus Red Birds of the American Association, another Cardinals affiliate. In 1933 he played for two other Cardinals affiliates, Springfield of the Class B Mississippi Valley League and Elmira of the Class A New York-Pennsylvania League.  According to Osborn’s friend (and El Paso sportswriter) Bob Ingram, Osborn did not appreciate the treatment he was given by the St. Louis organization: “He balked at taking a big salary cut and walked out on Organized Baseball.  He was bitter at the then Cardinal farm system and advised young players against going into it.”15

Osborn was back in El Paso by September 1933, when he was recruited by the semi-pro Hugo & Millers of the International League to pitch in the championships.16  He remained in El Paso in 1934, where he was being wooed by Jodie McCormick of the semi-pro Mitchell Brewers.17  By 1935 Osborn was pitching and managing for the semipro Crane Oilers of the Permian Basin Baseball League.18 He was still with the Oilers in 1938.

Sometime between 1930 and 1938, Osborn married Hallie Nell McPherson.  A son, John Bode Osborn, Jr., was born to them in Crane County on October 22, 1938, but he died in El Paso County only a month later.  In 1940 Bob and Hallie were still living in Crane, Texas, where he was working as a tool dresser.   He apparently then returned to El Paso, where, according to the El Paso Herald Post, he was living in 1948.  By 1949 he was managing the semipro Tigua Cubs.19  And he was always hanging around the sandlots in El Paso, “looking over youngsters, helping coach some of them, giving others a few pointers.”20

Some years later, Osborn and his wife relocated to Paris, Arkansas, where he planned to raise cattle.  He wasn’t a farmer for long, however, and soon became the recreation director for the town of Paris. According to Bob Ingram, “Baseball was his big love and he couldn’t get away from it.” Osborn died of a heart attack in Paris, Arkansas, on April 19, 1960.  He was 57 years old. His death came as a surprise; at the time he was lining up the teams for the area Little League.21  He is buried in Oaklawn Cemetery in Paris.  His wife died in 1991.