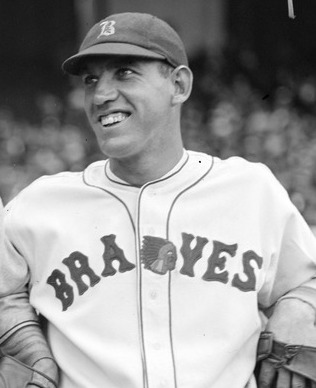 Wilfred Edgar Knothe was born on May 1, 1903, in Passaic, New Jersey, the youngest child of Gottleib and Augusta Meyers Knothe. As a youngster, Fritz was an accomplished two-sport star who excelled on the hardwood. In 1921-22, he was an all-state point guard for the Passaic High “Wonder Team” that amassed a 159-game winning streak (1915-1924) under Basketball Hall of Fame coach Ernest “Prof” Blood.2 After high school, Knothe played professional basketball for the Passaic Panthers and Kingston Colonials of the Metropolitan Basketball League and the Baltimore Orioles and the Rochester Centrals of the American Basketball League. For his professional basketball career, which lasted from 1924 through 1928, Knothe played as a reserve point guard and defensive specialist in 70 total games, scoring 2.3 points per contest.3

Knothe’s professional baseball career began in 1925, when he played Class B ball for several (Bay City, Flint, and Kitchener) Michigan-Ontario League teams. He spent 1926 and 1927 playing shortstop for Des Moines of the Class A Western League. Then, from 1928 through 1931, Knothe moved to third base and the Class AA Pacific Coast League. First he contributed two solid seasons with the Portland Beavers, then two great ones with the Seattle Indians. Pacific Coast sportswriters voted Knothe the outstanding third baseman of the 1931 season after he hit .317 and stole 44 bases.4 On December 9, 1931, Fritz Knothe was traded by Seattle to the Boston Braves for Bill Dreesen and Hal Haid.

The speedy Knothe began the 1932 season as the lead-off hitter for a rebuilding Braves team.5 As The Sporting News observed, improving upon their infield play was a major concern: “Bill McKechnie, manager of the Boston Braves, played checkers with his infield last year … However, Manager Bill seems to have discovered the right arrangement this season and the work of his infield has been one of the chief factors in keeping the Tribe up around the top. One of the keys to the combination is Fritz Knothe, whose work at third base for the Redskins has been scintillating.”6

While this reporter was engaging in a bit of hyperbole in describing the rookie third baseman’s fast start, Knothe did begin the season well with some surprising hitting results. On May 20, at Braves Field in a 10-0 victory over Cincinnati, he went 4-for-5 with three doubles and three RBIs. On May 31, again at Braves Field in a 7-2 defeat of the New York Giants, Knothe went 2-for-4 with a triple, one of his two career home runs, and four RBIs. National League hurlers soon caught up with Knothe, and he ended the 1932 season batting .2387 with a mediocre .318 OBP. But he played a consistent third base throughout the year, fielding at a .947 pace with 263 chances and 14 errors in 87 games in the field.

The young third sacker’s 1932 season came to an abrupt halt: “Fritz Knothe … is lost for the remainder of the season with a leg injury, suffered in the second game of the double-header of August 30 with the Pirates. Knothe, in sliding, sprained his leg in two places.”8 Over the off-season, Knothe was eager to return, explaining that he “was over-anxious to make good last spring and then when he was hitting his best stride he suffered the mishap.” The Braves faithful read that he spent the off-season working to rehabilitate his season-ending injury: “This winter he has been hunting and fishing…and subjected his leg to all kinds of tests.”9

But the Braves were enthused in 1933’s spring training over a hard-hitting rookie discovery: “[Dick] Gyselman, a rangy youngster, seems a real ‘find’ and looks to be the choice for third base over the veteran Fritz Knothe.”10 But McKechnie started Knothe at third to begin the season. On Opening Day April 16, at Braves Field in a 2-0 loss to the Philadelphia Phillies, he seemed to be the only Brave ready to begin the season: “[Boston was] unable to offer any more than a pair of hits off John Berly, both of these blows being turned in by Fritz Knothe.”11 Gyselman soon earned starts at third, but when the newcomer hit an early slump,12 Knothe was moved back to the hot corner where he had a solid early season both in the field and at the plate.

While Knothe’s play soon leveled off, he did show instances of his potential with the bat and in the field. For example, on May 3, against Cincinnati pitcher Red Lucas, Knothe was in the center of an eighth-inning winning rally by hitting a two-run home run; he also turned in an unassisted double play to choke off a Reds’ threat.13 Further, on May 19, he had a strong game at Pittsburgh’s Forbes Field in a 5-3 Braves victory: “Fritz Knothe, the only Brave to hit twice, opened the important first inning with a single.”14 However, by mid-season, McKechnie re-installed Gyselman at third base, and, on June 17, Boston traded Knothe along with Wes Schulmerich to the Phillies for Hal Lee and Pinky Whitney.

Knothe was fast out of the gate for his new club, leading them on a seven-game winning streak. On June 21, 1933, in a 10-8 win over the Reds, he went 4-for-4 with two doubles, two singles, and three RBIs.15 A Philadelphia correspondent was effusive in his praise for the new third baseman: “Fritz Knothe also shone in the field, as Whitney’s successor, and provided a poke here and there to help the cause along. The trade to date has been an unqualified success for the Quakers.”16

As in his Boston tenure, Knothe’s play soon tailed off and Philadelphia sent him on September 2, 1933, to Albany of the International League as part of a trade for pitcher Frank Ragland. At age thirty, Fritz Knothe’s brief major-league baseball career was over, a career which can be summed up in the old saw—little hit, good field. He batted .220 and, as a third baseman, the New Jerseyite fielded at a .953 clip.

Knothe’s last year in organized professional baseball was in 1934, playing the infield for the Kansas City Blues, where he batted a weak .247 and posted an uncharacteristically poor .915 fielding percentage. But he was not through with highly competitive baseball. Fritz (at third) teamed up with his brother George (at second) to star on powerhouse Long Island semipro clubs (particularly the Ridgewood Farmers) in the mid-1930s. They fought epic battles with the Mount Vernon Engine 3 Scarlets, losing close contests in 1936 and 1937. More typically the Farmers enjoyed success, such as the August 5, 1936, game where the younger Knothe had a single, double, triple, and six RBIs in a 10-6 defeat of the Springfield Greys.17

Knothe became a Passaic, New Jersey, police officer in 1935, serving as a patrolman until his death. However, he never wandered far from his love of sports, and led youth programs with the Junior Safety Patrol and Police Athletic League. He died on March 27, 1963, ten days after suffering a massive stroke. Fritz Knothe is buried in Holy Cross Cemetery in North Arlington, New Jersey.18

7 Among the 1932 Boston Braves starters, only 40 year-old future Hall of Famer Rabbit Maranville had a lower batting average at .235 than Fritz Knothe.