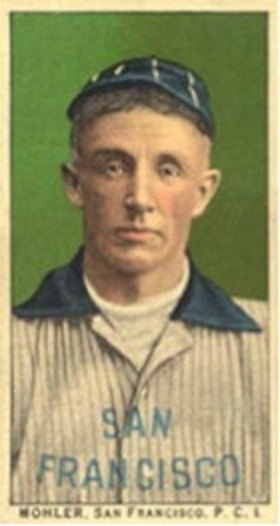 Kid Mohler played more games at second base (2,871) than anyone else in professional baseball history, and he ranks second in bases stolen in the minor leagues (769).1 For two decades he excelled in the minors, including eight seasons with the San Francisco Seals of the Pacific Coast League from 1905 to 1912. He captained the pennant-winning 1909 Seals, one of the 100 greatest minor-league teams of all time.2

Despite his success in the minors, Mohler appeared in only three major-league games. The talented infielder was disregarded by major-league scouts because he was small (5-feet-4½-inches)3 and because he threw left-handed, the “wrong” hand for a second baseman. There was “a strong prejudice against left-handed second basemen in the big league,” wrote Harry A. Williams of the Los Angeles Times.4

Ernest Follette Mohler was born on December 13, 1870, in Oneida, Illinois. His parents were Philip and Adeline (Hoffman) Mohler.5 A miller by trade, Philip moved his family to northeastern Kansas about 1885.6 Ernest attended school in Hiawatha, Kansas, and played on amateur baseball teams there.7

From 1889 to 1892, Mohler played on semipro and professional teams in Kansas, Nebraska, Iowa, Illinois, and South Dakota. In August 1890 the “Kid” was considered a “promising young twirler.”8 However, his pitches were pounded by the Kansas City Blues in a 24-8 defeat of his Lincoln (Nebraska) team on September 6, 1890.9 And on May 17, 1892, while pitching for a Jacksonville (Illinois) team, he walked 17 batters in an 18-4 loss to Rock Island-Moline (Illinois).10 Years later, Mohler said, “I was a pitcher at that time and thought I knew a lot about the game, and how to pitch, [but] I found I did not know anything.”11

Mohler gave up pitching and found a home at second base. In August 1894 Sporting Life reported that he was playing a “grand game at second, and hitting up to the .400 mark” as a right-handed batter on the St. Joseph (Missouri) Saints of the Western Association.12

Charlie Abbey, a Washington Senators outfielder from Falls City, Nebraska (17 miles from Hiawatha), knew Mohler and recommended him to the Senators,13 and the team employed him in the final three games of the 1894 season. The Senators lost all three games to the St. Louis Browns. Mohler “played second for the Senators in a creditable manner,”14 but managed only one hit in nine at-bats. Those were the only major-league games in his long career.

Over the next three seasons, Mohler was “one of the stars of the Western Association,”15 batting .300 for the Des Moines (Iowa) team and scoring 302 runs in 305 games.16 He was the smallest player in the league.17 Stints at Quincy (Illinois), London (Ontario), Denver, and Oakland followed from 1898 to 1901.

The speedy Mohler stole 70 bases in 1902 for the pennant-winning Oakland team of the California League.18 Jim Morley managed the league’s Los Angeles club. Twenty years later, Morley recalled the 1902 season and the remarkable fielding of Mohler at second base working in tandem with Oakland shortstop Buck Francks. “I have seen better individual players than either Mohler or Francks,” said Morley, “but never a pair which worked with such perfect coordination. Boy, I simply got to hating Mohler; he beat us out of so many games.”19

In 1903 Mohler played for the Denver Grizzlies of the Western League and the Seattle Siwashes of the Pacific Coast League. The next year he captained the Siwashes and scored 159 runs in 208 games, and his .317 batting average ranked second in the PCL.21 He played his first season for the San Francisco Seals in 1905, but was sidelined by several injuries during the season.22

Mohler and his teammates were in San Francisco when the city was hit by the great earthquake on April 18, 1906. The team survived, but the Seals’ ballpark, like much of the city, was destroyed by fire. Nicknamed the Refugees, the team carried on with the 1906 season, playing their home games in Oakland.23

Everything came together in 1909 for the 38-year-old Mohler and the Seals. Under Mohler’s leadership, the team compiled a 132-80 record and won the PCL pennant. Danny Long was the “manager” of the team but was present only when the team played at home.27 It was Mohler who guided the team at home and on the road. He was “the life and inspiration of the team,” “a hard working, conscientious leader,” who was “in the game every minute.”28 Sportswriter A.E. Dunning credited Mohler for the Seals’ success: “Mohler has won the 1909 pennant … by producing one of the grandest baseball machines ever seen in coast baseball. While he has a formidable array of individual stars of big league caliber, nevertheless it is the workmanship of the team as a unit that has given the Seals the top place on the Pacific coast this year.”29

A humorous incident in 1911 illustrated that it was Mohler, not Danny Long, who managed the Seals. The club was playing the Los Angeles Angels in San Francisco on August 31, and Mohler repeatedly warned the team about the clever pickoff move of John Halla, the Angels’ southpaw hurler. Yet in the fourth inning, Mohler drew a walk and was immediately picked off first by Halla. Duly embarrassed, Mohler declined to speak for the rest of the game. Danny Long, sitting on the bench in street clothes and puffing a cigar, realized he would have to manage the team. “With majestic dignity,” Long waved “a white paper programme” to direct his “minions,” though he never explained to the players what he meant when he “waggled the programme.” And he bellowed to the players throughout the game, “Keep agittin’ right after ’em!”30 The Angels won the game, 4-1. No doubt the Seals were relieved to have Mohler back in charge the next game.

As a second baseman, Mohler was “in a class by himself.”33 Grey Oliver of the Los Angeles Times called him a “diamond gymnast.”34 The Oregon Daily Journal said he was like “the candy kid with the sticky hands,” in the way he “speared line drives and grounders with one hand.”35Sporting Life said he was the best in the West at tagging baserunners.36

On June 5, 1909, Mohler pulled off one of his defensive gems in a 12-1 victory over the Angels. With two outs and men on the corners in the fifth inning, he raced “behind and beyond second base” to field a groundball, and in one motion, he grabbed it in his gloved right hand and flipped it over his left shoulder to the shortstop for a force out at second base.37 The Angels’ George Wheeler, a 39-year-old veteran, shook his head in amazement and said, “I never saw such fielding before and I don’t think I ever shall again.”38

Mohler played his final season with the Seals in 1912. Though he was 41 years old, he was still known as “Kid.”39 He was also nicknamed the “Little Giant.”40 Bill Reidy became the manager of the team in June 1912, and in August he named Del Howard as captain.41 Mohler decided it was time to go; in the offseason he requested and received his release from the Seals.42

In 1913 Mohler played for the Portland Colts of the Northwestern League. Among his teammates were three future major-league stars, Dave Bancroft, Harry Heilmann, and Carl Mays. The next year Mohler played for the Sacramento Wolves of the PCL but was released in June 1914,43 thus ending his professional baseball career.

All three of Mohler’s sons were fine athletes, but Orville was exceptional. As an All-American quarterback at the University of Southern California, Orv Mohler led the Trojans to the national championship in 1931. He was “the nearest approach to Illinois’ Galloping Ghost, Red Grange, that Southern California ever had” and “the greatest field general in Trojan history,” wrote Bob Weide of the Los Angeles Times in 1949. Orv played shortstop in the PCL in 1933. A skilled aviator, he joined the US Air Force one month after Pearl Harbor and rose to the rank of colonel. In 1949 he died piloting a B-25 bomber that crash-landed in Alabama after an engine failure.48

After his retirement from baseball, Ernest Mohler resided in Southern California and worked for the Southern Pacific Railroad.49 He succeeded Chief Bender as coach of the baseball team at the US Naval Academy in Annapolis, Maryland. Mohler led the Midshipmen to a 36-25-1 record from 1929 to 1932, and said it was the best position he ever had.50

On November 4, 1961, Mohler died in California at the age of 90.51 He was buried at the Forest Lawn Memorial Park in Glendale, California.52 In 2012 he was posthumously inducted into the Pacific Coast League Hall of Fame.

“No player or manager ever put more into Coast League baseball than Kid Mohler” – Harry A. Williams, 192253

1 Bill Weiss and Marshall Wright, “1909 San Francisco Seals,” milb.com/milb/history/top100.jsp?idx=71. George Hogriever holds the record for most stolen bases in the minor leagues with 948.

3 Mohler’s file at the National Baseball Hall of Fame.

12 Sporting Life, August 25, 1894. According to a questionnaire filled out by Mohler in his Hall of Fame file, he was a right-handed batter.

16 Computed by the author from statistics appearing at Baseball-reference.com and in Sporting Life, November 14, 1896; these numbers do not include the 15 games Mohler played for Grand Rapids (Michigan) at the end of the 1896 season.

51 Mohler’s obituary in The Sporting News, November 22, 1961, says he died in San Francisco, but the record of his death in the California Death Index, 1940-1997, at Ancestry.com, indicates that he died in Los Angeles.