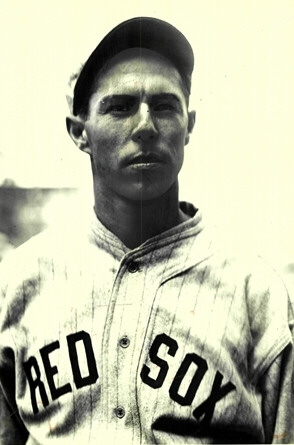 Russ Scarritt enjoyed an exceptional rookie season for the Boston Red Sox in 1929, leading the club with 71 runs batted in, second (to Jack Rothrock) in average with .294, and legging out 17 triples – a single-season Red Sox total that has not been topped since 1914.

He was born in Pensacola, Florida, on January 14, 1903, the fifth child of native Floridians Agnes and Theodore Scarritt, and grew up in Escambia County, Florida’s westernmost county. Theodore Scarritt worked as a watchman on the railroad. Russ attended public schools and four years at Catholic High School in Pensacola. He attended a military institute as a prep school and put in one year at the University of Florida at Gainesville.

He hadn’t played baseball at school. Scarritt told Brent Kelley, “I just played around in sandlot ball at home.” Turning pro involved some happenstance. “I didn’t intend to play professional baseball to start with. I was promised an appointment to West Point and when the time came somebody with a little more pull than me got to him and he offered me one for the Coast Guard and I told him to shove it – I didn’t want it. A fella had a chance to manage at Chattanooga and he asked me to go up there with him so I just went. I was 23. I was starting a little late.”1

“Sandlot ball” in this case was semipro ball, and Russ hadn’t played any ball in either high school or at the university because he wasn’t eligible due to his semipro status.2

It was 1923. Though Scarritt may have been Chattanooga-bound, it was at Johnson City where he got his start, at age 23, playing in the Class D Appalachian League for the Johnson City Soldiers and hitting .284 in 104 games. He upped his productivity in 1924, batting .340 and getting his first home run (he hit five of them that year) in pro ball. Advancing to the Class B South Atlantic League in 1925, he played for the Greenville Spinners and hit .348 with 11 homers. We lack statistics for 1926 but Scarritt played a full season with Greenville and was advanced to Double-A ball.

Scarritt played in 1927 and 1928 in the American Association for the St. Paul Saints and hit .333 and .354, ranking him as one of the league leaders. He was deemed ready for the big time. On December 7, 1928, the Boston Red Sox traded pitcher Slim Harriss and infielder Billy Rogell to St. Paul for Scarritt and catcher Alex Gaston, who was more the target of the trade than Scarritt.

Scarritt had to play his way onto the team in spring training and sufficiently impressed Red Sox manager Bill Carrigan. He opened the season batting third and typically served as the left fielder (though he played ten games in right and one in center). On Opening Day he played right field and with Babe Ruth batting for the Yankees “was chafing his back against the right-field wall” – and Babe hit one out, but hit it to left. At the plate, Scarritt walked three times and struck out once. His first hit came in the team’s second game and his first RBI in the third.

The Red Sox outfield was almost a complete makeover from 1928, when Doug Taitt, Ken Williams, and Ira Flagstead had played the bulk of the games. In 1929 it was Bill Barrett, Scarritt, and Jack Rothrock who played the most, though Taitt and Williams both got into quite a few games. Flaggy had gone to the Senators on waivers in May.

The Red Sox, who had finished in last place – eighth place – four years in a row, had brought more men to spring training than any other team in 1929, but that season proved no different. Last again. The 5-foot-10, 165-pound Scarritt (batted left/threw right) played in 151 of the 154 games and produced the aforementioned stats: .294 with 71 RBIs. He hit just one homer, on June 2. He might have hit more, but during one stretch it seemed as though every hard-hit ball was snagged by a defender. “When I come to bat, each fielder has a thousand hands,” he remarked at one point.3

Scarritt had a strong arm and he recorded 16 assists. In mid-August, the Boston Globe said he has “probably played as consistently as any of the Carrigan crew.”4 He even picked up four votes in the MVP voting – well behind Lew Fonseca’s 46, but still reflecting some appreciation of his work.

Heinie Wagner became Red Sox manager for 1930 and Scarritt was the one player who didn’t have to travel to spring training: It was held at Pensacola’s Legion Field in both 1930 and 1931.

Scarritt doubled his home-run output in 1930, hitting two. He played in only 113 games, however, losing a full month after an injury on July 13. It was in Cleveland and he’d tripled and scored in the top of the first, but he broke a joint in a finger of his left hand trying to catch a long fly ball by the Indians’ leadoff batter in the bottom of the first. He pinch-hit in three games in the latter half of August but only resumed full-time work on the 28th.

Scarritt drove in 48 runs in 1930 and hit for a comparable .289. Only occasionally did he make the headlines; when he did, it was a little more often for defensive gems than for his offense. Singling in the go-ahead run in the tenth inning of a June 4 game in Cleveland got him some ink. Two days later he was 4-for-4 with two doubles, but the Sox lost, 9-4. The team won only 52 games (52-102) and finished eighth again. There were other times Scarritt made the difference for the better, such as the two eighth-inning runs he singled in during a June 23 game in Boston against the Tigers, and the three runs he drove in during a 4-1 win in Detroit on September 18. For the most part, however, Scarritt seemed to be a well-balanced contributor, a good and steady player.

He never fully recovered after the injury, however. He was in far from ideal shape. Indeed, the Boston Herald’s Burt Whitman said, “His hand was busted all to smithereens and he was almost a total loss from then until the end of the season.”5

After the regular season was over, Scarritt traveled to Cuba for a series of exhibition games over ten days with a team of major leaguers drawn from many clubs. The trip had been organized by the New York Giants’ Dave Bancroft.

Scarritt opened the 1931 season with the Red Sox and played in ten games through May 6. He was hitting only .154 and had just one RBI to his credit. He’d played well enough in spring training but even before the exhibition season, first-year manager Shano Collins seemed to have more options in the outfield.

Collins had more powerful offense from Earl Webb (who set the major-league doubles record of 67 in 1931 and drove in 103 runs), and solid seasons from Rothrock and Tom Oliver. On May 6 Scarritt was placed on waivers and selected by the Washington Senators, who intended to use him in reserve since they had a couple of outfielders hampered by injuries at the time. Though his offense had been disappointing, even for a last-place team, Scarritt was “regarded as one of the cleverest defensive outfielders in the league.”6

For his part, Scarritt said he was disheartened by the waiver deal. “I couldn’t understand why they traded me to Washington. I don’t know why. I never found out. It just took me off my feet, I just went through the motions, but my heart wasn’t in it.”7

Scarritt was quick in the outfield, too, at one point picking up the nickname Rabbit. He ran more in the minors, but “they didn’t let us run a whole lot” in the big leagues.8 He never got into a game for Washington, however, and spent the year playing in the minors – 106 games for Chattanooga in the Single-A Southern Association (.293) and 11 games at Double-A for Baltimore.

On December 18, 1931, Baltimore traded Scarritt to the Philadelphia Phillies for outfielder Buzz Arlett. He played with the Phillies through May, but was released to Fort Worth on May 26 and spent the rest of the year there, in Single-A ball again, hitting .302 in 105 games. He’d batted .182 in 11 Phillies games but had neither driven in nor scored a run.

Scarritt played in the minors through 1937. He was late reporting to the Ft. Worth spring training camp in 1933 due to the illness of his wife.  He was soon acquired by Indianapolis and started the season with them.  He went 9 for 30 in eight games, scored two runs, and drove in three.  He then had leg problems that kept him from playing and was released in late April. He was with Fort Worth and Oklahoma City in 1934. Again we do not find him playing in 1935 – perhaps because his wife died on March 18 – but he played in 1936 for Omaha and Rock Island, and a few games for Kansas City. In 1937, his last pro games were 25 in which he appeared for the Pensacola Pilots in the Class B Southeastern League.

Scarritt’s son Jerry said, “He just quit playing. His first wife died of cancer, and it took the heart out of him.”9 He’d also lost his house and all his possessions in a Christmas Day fire the year he retired. Scarritt took up work prospecting for oil in Texas but “dug a few dry holes and finally gave it up and had to go to work.”10 He returned to Pensacola, where he worked 40 years as service manager for Muldon Ford in Pensacola.

In February 1927 Scarritt married Capitola Pou. They had two or three children, but as noted, Capitola died of cancer in March 1935. When Russ himself died almost 60 years later, he was buried next to his first wife. (He remarried in October 1940 to Mildred Hart.) At the time of his death, it was said that both wives had predeceased him, as had his son Russell Theodore Scarritt. He was survived by sons Jeremiah Mason Scarritt and Theodore Pou Scarritt, though only two – reported as Theodore (11) and Thomas (8) were listed in the 1940 census. He was also survived by 15 grandchildren.

In addition to the sources noted in this biography, the author also accessed Scarritt’s player file and player questionnaire from the National Baseball Hall of Fame, the Encyclopedia of Minor League Baseball, Retrosheet.org, and Baseball-Reference.com. Thanks to Bob Hoie for additional information.

1 Sports Collectors Digest, April 1, 1994. Scarritt was interviewed by Kelley on his 91st birthday and may have misremembered both his age (20) and the city where he played.