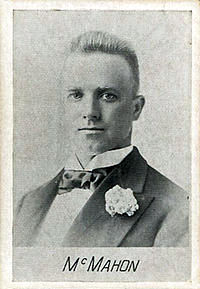 He grew up in the Henry Clay Village area of Wilmington, Delaware, on Brandywine Creek, near the Experimental Station of the E.I. du Pont de Nemours Company, manufacturer of dynamite, gunpowder, and other explosives. The products blew up occasionally, so the area may not have been a pleasant residential community. As a youngster he ran with an Irish street gang. But his magic right arm got him off the street. He started pitching for various amateur, semipro, and professional baseball teams in northern Delaware and southeastern Pennsylvania. His success came to the attention of the Athletics of Philadelphia and he advanced to the big leagues. Sadie McMahon was on his way to becoming one of the biggest stars of 19th-century baseball.

John McMahon was born in Wilmington on September 19, 1867, the oldest son of Johanna and Michael McMahon. Michael was a laborer. Both of his parents were immigrants from Ireland, as was his wife, Norah, whom he married in 1894. How McMahon acquired the nickname Sadie is a matter of dispute. It was strictly a baseball cognomen. All baseball reference books call him Sadie; all nonbaseball sources refer to him as John. (Two other 19th-century major leaguers also had the nickname Sadie, and SABR researcher James K. Skipper, Jr. found at least 50 other players since 1871 with feminine nicknames.[1])

McMahon was pitching for Norristown in 1889 when the Athletics signed him in midseason. He made his major-league debut on July 5 and won 14 games during the remainder of the season. In 1890 he was by far the A’s best pitcher and had won 20 games by the Fourth of July, but the Philadelphia club was running into financial problems and sold McMahon along with catcher Wilbert Robinson and outfielder Curt Welch to the Baltimore Orioles in September. His combined record with the two teams was 36 wins and 21 losses. He led the American Association in wins, games pitched, innings, and strikeouts. Both McMahon and Robinson were rather plump, leading to their being dubbed the Dumpling Battery.

When the American Association folded after the 1891 season, the Baltimore club joined the National League, where they became one of the legendary teams in the history of baseball. The Orioles gained their fame not only because their three straight pennants made them one of the best teams of the era (some say one of the best of all time), but because of their reputation as the dirtiest team ever. Tripping, shoving, and blocking baserunners occurred frequently, and infielder John McGraw introduced the art of impeding a runner’s progress around the bases by grabbing his belt and holding on. When running the bases themselves the Orioles slid into bases with their spikes flashing. They attempted, with some success, to intimidate both their opponents and the umpires. John Heydler, who was an umpire at the time and later president of the National League, told a sportswriter, “The Orioles were mean, vicious, ready at any time to maim a rival player or an umpire. … The things they would say to an umpire were unbelievably vile.”[2]

McMahon fit right in with this crew, perhaps not in viciousness but certainly in rowdiness. He was reputed to be a heavy drinker and a carouser. Robert L. Tiemann wrote that Sadie was something of a hell-raiser, especially on the road. In 1892 he was suspended for the final month of the season for missing a game and then cussing out his manager and owner in an argument over his fine for being AWOL. He continued to pitch well, winning over 20 games each year from 1892 through 1894. In 1894 he was having one of his best seasons, with a 25-8 record, when he was sidelined by a shoulder injury at the end of August. The Orioles won the pennant anyway, but lost the postseason Temple Cup matches to the runner-up New York Giants.

As the shoulder was slow to heal, Sadie decided to sit out the next season. Meanwhile, the Orioles and the Cleveland Spiders were fighting for the 1895 pennant. During the summer the two teams alternated in first place. Led by first baseman-manager Patsy Tebeau, who was reputed to be a brawler and a bully, the Spiders were giving the Orioles a run for their money, not only in the pennant chase but also in the rowdiness department. At one point Baltimore had fallen to third place and the team’s championship hopes looked dim.

About this time Baltimore manager Ned Hanlon ran into Sadie on a downtown street corner. Burt Solomon reconstructed the ensuing conversation as going something like this:

The pitcher was true to his word. On August 1 he rejoined the club and pitched his first game of the year, a dramatic 1-0 victory, the first of eight straight wins. The magic was back in his arm. The curveballs and changes of pace were working. The Orioles won 14 straight and had grabbed a two-game lead by the middle of September, when they faced the Spiders in a four-game series. The teams split the first two games. Hanlon said Charley Esper would probably pitch the all-important third game. In the clubhouse before the game the manager was again asked who would pitch. “The best man we’ve got,” he replied. “This is very important, and we need it.”

From the corner of the clubhouse McMahon asked; “Want me to pitch?”

“Yes, if you feel like it,” replied the skipper.

And pitch he did—a one-hitter, virtually wrapping up the pennant for Baltimore. In those last few weeks of the season the right-hander won 10 out of 14 decisions.

In some years the postseason Temple Cup series between the league champion and runner-up was greeted with massive apathy by fans and players alike. But 1895 was different. Cleveland fans were fired up by hearing allegations that other Western clubs had purposely lost games to the Spiders in a vain attempt to help the latter win the pennant. Baltimore players were eager to make amends for losing the previous year’s Cup to the Giants. Players and fans from both clubs were annoyed at their opponents for alleged dirty play during the season.

The series opened in Cleveland. Ruffians pelted the Orioles with potatoes and stones. At least three Baltimore players were hit in the head with vegetables or minerals. With McMahon going for the Orioles against Cy Young of Cleveland, Baltimore had a one-run lead in the eighth inning. With Patsy Tebeau on second base, a Cleveland batter lofted a fly ball to Joe Kelley in the outfield. A dozen fans rushed onto the field straight at Kelley, but he caught the ball. The fans then surrounded him and threw their coats in his face to prevent him from throwing the ball to the infield. Tebeau tagged up and ran all the way home with what he thought was the tying run. But the umpire sent him back to second base. Later he scored anyway, as McMahon weakened. The Spiders won that game and the next two to go up three games to none.

The series moved to Baltimore. Crowds met the Spiders at the train station and pelted them with eggs and rotten apples. Ugly behavior worsened as the series went on. The Orioles were unable to overtake their rivals and lost the Temple Cup for the second year in a row. In 1896 Baltimore got revenge by taking the cup from Cleveland and won it for the second time against Boston in 1897, but by then interest in the series had waned.

McMahon pitched for the Orioles on Opening Day in 1896, but had won only ten games when he was shelved by stomach trouble during a July road trip. When he tried to return to action, his shoulder injury flared up again. He won only one more game in the big leagues. The Orioles released him after the season. He signed with Brooklyn but was unable to win a single game in 1897. He made his last major-league appearance for the Bridegrooms on July 12, 1897, at the age of 29.

During his career McMahon had led his league twice each in wins, complete games, and shutouts and once in strikeouts. He had finished as high as second in won-lost percentage and in strikeouts to walks ratio. He had ranked fourth one year in earned-run average and also fourth one time in WHIP (walks plus hits per innings pitched).

McMahon retired to Delaware City and pitched in local leagues. His last game in Organized Baseball came in 1903 when he went to Baltimore to visit his old teammates Hughie Jennings and Wilbert Robinson, who were co-managers of the Orioles, now in the Eastern League. He volunteered to pitch and hurled a complete game, defeating the Newark Sailors. From 1911 to 1925 he was a scout on the payroll of another former Oriole teammate, John McGraw, now manager of the New York Giants. The skipper said that in addition to being a great pitcher, Sadie was a great judge of ballplayers and a close student of the game. McMahon accepted the assignment with these words, “I may not find a good one, but I won’t dig up any bad ones. It’s my idea that too much time and money are wasted on bad players just for the sake of trying them out.”[5] Months went by before the manager heard anything from his scout. When at last he reported, he said, “Mac, I have covered the whole United States and I have found but one ballplayer who looks good. I’ll bet on him.”[6] That one good ballplayer was George Burns. McMahon found him playing for Utica in the New York State League; the Giants signed him; and he helped them win five pennants during a distinguished 15-year major-league career as an outfielder.

The 1920 Census showed John McMahon and his wife, Nora, as live-in servants in the household of Bessie du Pont, former wife of the gunpowder tycoon Alfred du Pont. Nora was identified as a housemaid and John as a houseman. It may be difficult to envision the rough and rowdy Sadie McMahon living in the home of a society matron, but there he was. In the 1930 Census Mac was listed as a house carpenter.

John McMahon died in Wilmington on February 20, 1954, at the age of 86. He is buried in the Brandywine Church Cemetery.

Sadie was inducted into the Delaware Sports Museum Hall of Fame in 1979. The two men who have won more games than any other managers in the history of baseball both had high praise for McMahon. Connie Mack called him “the one-man pitching staff of the greatest team in baseball.”[7] John McGraw picked Sadie as one of the six pitchers on his all-time baseball team, describing the right hander as “one of the greatest hurlers who ever lived, whose best quality was his nerve and coolness under fire; one of the earliest money pitchers.”[8] Among pitchers whose major-league careers ended at the age of 30 or younger, only Bob Caruthers won more games than McMahon.