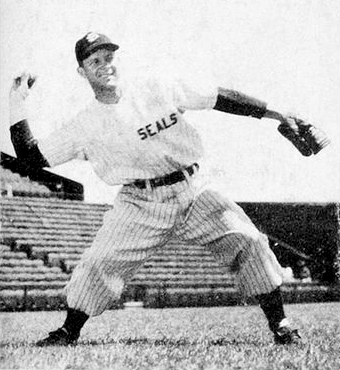 From his debut in the majors to his fifth and final game spanned a mere 11 days in April 1947, despite his getting two hits in that last game. But Frank Strickland Shofner played nine years in the minor leagues.

Though both were Texans, Strick Shofner was no known relation to pitcher Milt “Pinky” Shoffner, who played in seven major-league seasons from 1929 through 1940.

Frank “Strick” Shofner was born in Crawford, Texas, a community much later made more famous as the home of President George W. Bush, on July 23, 1919. (In his playing days, his birth year was given as 1920, which had the effect of making him appear a year younger.) At the time of Frank’s birth, his father, Tom William Shofner, was an ice dealer in Bruceville, Texas. Both Tom and his wife, Ethel (Strickland) Shofner, were native Texans. At the time of the 1920 census, they lived in Bruceville with their only child, Frank, and Ethel’s mother, Dora Strickland. Tom was listed as a truck driver (perhaps an ice truck) with his own farm. Shofner considered himself of Irish and English descent.1

He went through the public schools in Crawford and graduated from Crawford High School.He was a halfback on the school’s football team, which won the conference title three years in a row. Football earned him a scholarship to North Texas State College in Denton. “In fact, we didn’t have any baseball team at North Texas,” he said.2 During his junior year, he was summoned to military service. He had planned to go into naval aviation, but navy doctors found he had a perforated eardrum so instead he spent 13 months in the United States Army. He did ultimately get a B.A. from North Texas State.

His first year in Organized Baseball was in 1944 when he signed with the Red Sox farm team, the Louisville Colonels. Red Sox third baseman Rip Russell later said of Shofner when the two were among nine players contending for the job, “He’s the boy Birdie Tebbetts recommended to Joe Cronin when he saw him play on a service team in Texas. I wish Birdie had minded his own business.”3

Shofner had actually had his choice of teams. “Tebbetts, who was stationed at Waco Army Air Field, tried to sign me for Detroit. At the same time, though, he wrote a letter to Cronin, who in turn told Bruce Dudley of Louisville about me. Dudley called me immediately and after I thought the situation over, I agreed to sign with Louisville instead of Detroit.”4

He had a very good year, playing shortstop and appearing in 133 games, batting .317. Louisville finished third in the American Association standings, but won both rounds of the playoffs, sweeping St. Paul in the final round. In the Little World Series, they lost to Baltimore.

He played a little third base (17 games) for the Colonels in 1945, the rest at shortstop. He hit .298, with a league-leading 13 triples. And the Colonels replicated their success from 1944, finishing third but beating St. Paul in the playoffs. This year they won the Little World Series, beating the Newark Bears.

Louisville became a Triple-A club in 1946, and Shofner played more third base (83 games) than short (49 games); he hit .305, with 84 runs batted in. Again, there was postseason glory; this time they finished first in the standings, but they took four of five games in the first round and then swept Indianapolis in the finals. This year, the Montreal Royals (and Jackie Robinson) beat the Colonels in the Little World Series.

Shofner was ticketed for Boston in 1947. On September 24, 1946, before the Little World Series got underway, he was one of seven Colonels who were added to the Boston roster, with an eye toward 1947.

He had a good shot at making the team. There was an opening at third base, with nine contenders, but Frank, in the words of the Plain Dealer‘s Gordon Cobbledick, was “the most experienced of the rookie candidates.” He was described as “stocky,” being 5-feet-10 and listed at 187 pounds. He threw right-handed, but batted from the other side, “the only left-handed batsman ever to hit a ball over the left field wall in the spacious Louisville ball park.”5

Frank and his wife, Doris (Magers), had married in May 1942, and now had a three-year-old son, Frank Jr.

The Sox were reigning American League champions, hoping to win another flag. Shofner worked out at Wichita Falls College for three weeks before reporting to spring training at Sarasota, had a very good spring training, and made the big-league team. It didn’t hurt that on the last day the team was in Florida, March 27, he hit a two-out three-run triple in the bottom of the ninth, catapulting the Red Sox to a 5-4 win over the Yankees. During the springtime, he had become “the apple of Joe Cronin’s Irish eyes.”6

There was some thought of alternating Eddie Pellagrini and Shofner at third base.

His debut came on April 19, in Philadelphia. He took over at third base in the bottom of the eighth, the Athletics up 1-0 at the time. They scored another run, but Ted Williams hit a two-run homer to tie it in the top of the ninth. With the score tied, Sam Mele tripled to lead off the top of the 10th. Shofner came up after a walk and a strikeout, and he lifted a fly ball to left field, but too shallow for Mele to attempt to tag and score. Johnny Pesky drew a base on balls to load the bases and Dom DiMaggio singled to center to score two. The Red Sox won, 4-2.

Three days later he pinch-hit in a game at Yankee Stadium but struck out.

On the 26th, he started the game at third base and appeared four times at the plate. He grounded out twice, popped up to the shortstop, and then struck out. The very next day, he got another start. The game was a 6-6 tie, called after nine innings.

The next game the Sox played was on April 29, in Detroit. Shofner got another start. The Tigers took a 1-0 lead, but when Shofner led off the top of the fourth inning, he tripled to right-center. DiMaggio singled him in and the game was tied. In the eighth, his fourth time up, his singled, advancing Billy Goodman from second to third. DiMaggio hit a fly to center and Goodman scored. The Sox lost, however, 8-3.

Having a 2-for-4 day bumped Shofner’s batting average up to .154, but that’s where it stayed. He’d appeared in five games in the big leagues, but never got into another one. He stuck with the team another couple of weeks, but on May 12 he was optioned to Louisville along with pitcher Al Widmar. The Boston team had not at all given up on him; indeed, the INS wire service story said that manager Joe Cronin had sent him “on the condition that he be played regularly at shortstop.”7

He struggled with the Colonels, only hitting .264 in 86 games.

On October 22, he was released outright to the San Francisco Seals of the Pacific Coast League.

Had he not had those two hits on his last day with the Red Sox, he would have been .000, instead of .154, Thanks to the triple, he has a .308 slugging percentage. He had 10 chances in the field, three putouts and seven assists. He made no errors.

On January 19, the Seals traded Shofner to the Columbus Red Birds for third baseman Don Lang. Columbus was a St. Louis Cardinals affiliate. He hit .241 in 126 games, with 10 home runs. In October, his contract was assigned to the Houston Buffaloes of the Double-A Texas League. He hit .241 again.

Shofner’s final season was 1952. He began the year with Houston, but was sent to the Oklahoma City Indians in May. The Indians finished fourth, but won the first round of the league playoffs before being routed in the finals.

After baseball, he worked for a while at W. A. Holt in Houston. In 1971, following an inquiry from one of SABR’s founders, Joe Simenic, the McGregor Mirror newspaper wrote to inform Simenic that Shofner was living in Waco and working as a salesman at B and B Sporting Goods.

Shofner died in Crawford at the Crestview Retirement Center on October 10, 1998, and in buried in the Crawford Cemetery.

In addition to the sources noted in this biography, the author also accessed Shofner’s player questionnaire and player file from the National Baseball Hall of Fame, the Encyclopedia of Minor League Baseball, Retrosheet.org, and Baseball-Reference.com.

1 So he stated on his player questionnaire for the National Baseball Hall of Fame.