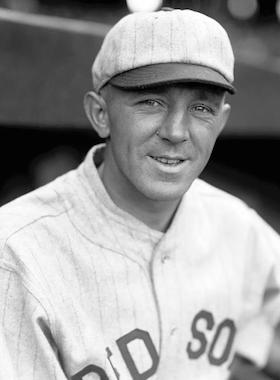 Though we haven’t yet been able to determine the community where he was born, his given name was Anton Frank Wleczek and he was born to Felix Wleczek (1873-1911) and Maryanna Paczocha Wleczek (1873-1942). The family arrived in the United States in 1903 and settled near Milwaukee. The 1910 census shows them settled in Lake Township, Milwaukee County, on a family farm. Maryanna was listed as a “farm laborer, home farm” and Felix worked as a pump tender in a railroad shop. There were six children in the family at the time: Martha (13), Stanislawa (“Stella,” 12), Anton (10), Agnes (8), Mary (7), and Frank (5). Felix was said to speak English, but Maryanna only Polish. Anton seems to have attended school for seven years, but not more.1

It was for an East Milwaukee company team, in September 1920, that we first find Welzer in the news. The visiting Bucyrus team from Evansville, Indiana played a three-game series on Milwaukee’s Chero Cola field, and Welzer threw a three-hitter, while homering and scoring his team’s other run in a 3-2 loss.2 He graduated from semipro ball to Organized Baseball by 1922, playing in Michigan for the Muskegon team in the Central League. He’d attracted attention early on in the Muskegon Chronicle, which wrote on April 24, “Tony Welzer is a sticker, if he continues to fool the batters in the same style he did yesterday.”3 Indeed, he proved a sticker; Welzer was 13-17 in the Class B league, with a 3.58 earned run average. The Muskies finished 67-62.

The renamed Muskegon Anglers joined the Michigan-Ontario League in 1923, and Welzer pitched two more very similar seasons for them: 14-16, 3.62 ERA in 1923 and 18-14, 3.61 in 1924. After the 1923 season, he’d been signed by the Chicago White Sox. Welzer went to spring training at Winter Haven but didn’t stick with the team and was released back to Muskegon right when the 1924 season began.

The Boston Red Sox had seen him pitch in spring training. In a game at Mobile on April 1, Welzer had held them scoreless for four or five innings, leaving the game after his teammates had scored five runs in the bottom of the fourth. The Red Sox started scoring and ultimately won, 13-11. Melville Webb of the Boston Globe wrote that Welzer “has a lot of stuff.”4

On September 14, 1925, the Boston Red Sox purchased the contracts of three players, one of whom was Welzer from Mobile. It was written that he was “picked up because of the control he showed, as much as for anything else.”5 The Red Sox had become a perennial last-place team and needed to find some way of escaping the cellar.

He made the team out of spring training in 1926 and debuted in Boston on April 13, Opening Day, as the third of six pitchers manager Lee Fohl threw into the effort to beat the Yankees. Welzer pitched a scoreless sixth inning, but was removed for a pinch-hitter, and the Red Sox lost, 12-11. His first start came at Yankee Stadium on April 22 and he gave up five runs in 5 1/3 innings, though the Red Sox won the game in the end. Welzer’s first decision was a loss, in Washington on April 27, when he surrendered nine runs (four earned), also in 5 1/3 innings.

Welzer won his first game on July 1, in relief in Philadelphia with one scoreless inning, pitching at the right time in the game. Seven innings of scoreless two-hit relief against visiting Detroit on July 8 gave him another win. His best game was certainly the five-hit shutout of St. Louis on August 17. James O’Leary of the Globe wrote up the game and said that Welzer “looks like a comer.”6 By season’s end, he had appeared in 39 games (five starts) and produced a record of 4-3, with a 4.86 ERA.

In 1927, Welzer started much more frequently–19 times in 37 appearances–and was 6-11 with a 4.72 earned run average. He benefited from three complete-game wins over the White Sox; one by a 3-2 score, and two by a 2-1 margin. His .353 winning percentage was slightly better than the team’s .331 (51-103) under new manager Bill Carrigan. For a reported control specialist, in his two-season big-league career, Welzer walked more batters (124) than he struck out (85), and his career WHIP (walks and hits per innings pitched) was not that good–1.626.

On December 7, the Red Sox showed how much they wanted pitcher “Big Ed” Morris from Mobile, trading the Bears four players (including Welzer) as “part payment” for the big man.7

Welzer’s last year in baseball was 1932. He signed with Binghamton (also in the New York-Penn League) and improved his ERA considerably, to 3.77. His record was 6-7.

After baseball, he found employment as a machinist for International Harvester.9 At some point, Welzer married Mary “Mae” Albricki, whose father Ladislaw was born in a part of Poland that was listed as “Russia” at the time. She died in 1958. The couple had no children.