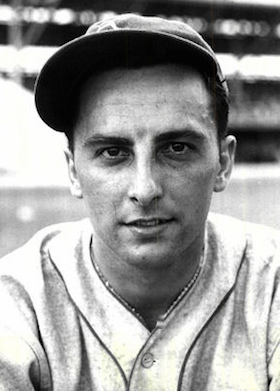 Traded for Ted Williams. That’s the sort of distinction one could well dine out on for years.

The trade occurred in December 1937. Al Niemiec’s major-league career was over at the time, though he was only 26 and naturally hoped to get back to the big leagues. He played five more years in the Pacific Coast League, before World War II intervened, and he wound up in dispiriting postwar legal entanglement fighting to get his job back.

Niemiec came from Connecticut. His father, Joseph Niemiec, was a Nutmeg State native, born to parents from Poland. His mother, Catharine, had been born in Poland. The couple had six children – Alfred Joseph Niemiec and his younger siblings Floyd, Elenor, Daniel, Dolores, and Leonetta. Alfred was born on May 18, 1911, in Meriden, Connecticut. At the time of the 1920 census, the family lived among a rather large community of Poles, many of whom worked – as Joseph did – at a lamp factory. Ten years later, Joseph Niemiec was a fireman employed by the Meriden fire department.

A member of the College of the Holy Cross Class of 1933, Al had attended St. Thomas Preparatory School beforehand. At Holy Cross he played intramural tag football and basketball, and won the fall tennis tournament in his junior year, but baseball was his game. He was on the freshman team, and then played three years as the varsity’s third baseman. He was apparently successful academically as well – voted “Best All Around Man in the Class.” The college yearbook observed, “As a scholar he ranked with the highest men in the class through four years of varied subjects.”

His exploits on the diamond were often noted in the Boston newspapers – for instance, the subhead in the Boston Herald reading “Niemiec’s Fielding, Batting Stand Out in Victory.”1

Niemiec was signed by the Red Sox and assigned to their Reading Red Sox in the New York-Penn League in time to appear in 62 games. He hit .306 with a pair of home runs, playing third base.

In the offseason, he kept in shape playing basketball and coaching the Meriden St. Stanislaus club of the State Polish League.2 Once he got the word, he decided to quit basketball.

Manager Nemo Leibold turned in such a favorable report on Niemiec that Red Sox GM Eddie Collins and manager Bucky Harris thought of him as a real possibility for the Red Sox team. Collins said, “I saw Niemiec play several games for Reading last year, and I’m willing to say that he’s just as good as a fielding third baseman as there is in the American League at present.”3 Collins acknowledged that it was high praise for someone with only 62 games of professional experience, and that Niemiec’s fielding was more advanced than his skill at bat.

Niemiec was placed with the Kansas City Blues (American Association) and acquitted himself well at a notch higher level of play than with Single-A Reading. He hit .301 in 137 games, playing shortstop.

In September Niemiec was brought to Boston and debuted with the Red Sox on September 19 in St. Louis. He was right-handed, stood 5-feet-11, and was listed at 158 pounds. Niemiec played second base, batted leadoff, and was 2-for-4 with one RBI. He was 3-for-3 with another RBI the next day. There’s no way he was going to keep up a .714 pace, and after nine games in 1934 and 32 plate appearances, he finished the season with a .219 average and three runs batted in.

In February 1935 Niemiec was engaged to Tessie Nowakowski of Meriden, a local basketball player herself. If her surname didn’t seem Polish enough, her actual first name – Czeslawa – may have been more convincing. They married in October; she was working for Travelers Insurance and he took a winter job in the shipping department of Moran Transportation.

On March 31, 1935, Niemiec was optioned to Double A, with the Red Sox affiliate Syracuse Chiefs. He hit .278 in 153 games. After the season, he worked selling life insurance in Syracuse. On January 4, 1936, he got the word that he’d been traded (with Henry Johnson) to the Philadelphia Athletics for Doc Cramer and Eric “Boob” McNair. There was also a very large payment of $175,000 sent to Connie Mack‘s Athletics.

The trade gave Niemiec another shot at major-league play. He pinch-hit the first couple of months, played a little shortstop in early June, and then (after Mack sold Rabbit Warstler to the Boston Bees) settled in at second base the rest of the year. Niemiec appeared in 60 games, accumulated 235 plate appearances, and hit for a .197 batting average. He drove in 20 runs. He had never been that strong defensively; even in his two full minor-league seasons, he made more than 40 errors each year, with fielding percentages of .947 and .949. In the majors, he’d actually done better, not committing any errors for the Red Sox and erring only 11 times in 323 chances. His lifetime major-league fielding percentage was .973.

Just a few days after the major-league season ended, the Baltimore Orioles (International League) purchased Niemiec’s contract from Philadelphia, on October 9. In mid-March of 1937, the Little Rock Travelers acquired him in a trade for Ted Wright. Little Rock (Southern Association) was also a Red Sox affiliate; Niemiec played in 146 games and batted .313. Near the end of August, Little Rock’s Doc Prothro announced the outright sale of Niemiec and Byron Humphrey to the Boston Red Sox. He played out the season with the Travelers.

On December 7, 1937, the deal was done. The Associated Press reported: “Beating other clubs to the deal, the Boston Red Sox today obtained Ted Williams, promising ‘kid’ outfielder, from San Diego of the Pacific Coast league for two players and cash.”4 The two players were outfielder Dom Dallessandro and infielder Al Niemiec. The news story didn’t understand that it wasn’t truly a matter of beating out the other clubs at the winter meetings. San Diego owner Bill Lane and Red Sox GM Eddie Collins had already forged a handshake agreement that the Red Sox would have first crack at Williams.5

Williams went on to have considerable success with the Minneapolis Millers in 1938 and the Red Sox after that.

Niemiec played the 1938 and 1939 seasons with the San Diego Padres. He lost about a month of play the first year, due to a brain concussion from a beaning in June during a game against Seattle, but still hit .304 in 130 games. He appeared in 155 games in 1939, but saw his average decline to .279. The Seattle Daily Times wrote after the 1939 season that “he hasn’t shown much at the plate since he was ‘beaned’ the prior year.”6

On November 13 the Seattle Rainiers claimed Niemiec off waivers; it was expected that he had been acquired as fodder for further trades, but in fact he played for Seattle for the next three seasons, 1940-42. He hit .274, .297, and .266 in the three years with the Rainiers. In 1940 his fielding woes evidently behind him, he set a league record for defensive work at second base with a .988 fielding percentage.7 His .981 percentage in 1941 led the league. In between the regular PCL season and the playoffs, Niemiec returned to Meriden, where he was commissioned as an intern in the US Navy’s Pre-Flight program, to be sworn in after returning to Seattle for the playoffs. He and his wife had two sons at the time.

Like many professional athletes, Niemiec was able to use his athleticism in the service. He was assigned to pre-flight at St. Mary’s College in Moraga, California, and he was put on the athletic staff (in his case, in charge of swimming). St. Mary’s Pre-Flight had a baseball team, under coach Charlie Gehringer. He had Niemiec play third base.8 In January 1944, Niemiec was promoted to lieutenant junior grade.

After being mustered out of the Navy on January 6, 1946, Niemiec signed a contract with Seattle and worked out with the team in the spring, but Seattle had another man (Bob Gorbould) ready for the job. The GI Bill, according to one explanation taking baseball into account, guaranteed returning servicemen “a job and a comparable wage to a player, assures him of a 30-day trial in spring training so that he gets a ‘fair shake,’ and guarantees him two weeks pay after the season opens. But there’s nothing in the baseball bill that assures Joe Hero of holding the position.”9 One might ask: How could there be?

On April 21 Niemiec was released unconditionally. It was 23 days into the season, a little more than the minimum two weeks. A week later he filed a protest saying he’d been released “without cause.” The Selective Service System, rather promptly, agreed with him. On May 2, W.G. Bramham, president of the National Association of Professional Baseball Leagues, wrote a letter to “All League and Club Presidents.” (A copy is in Niemiec’s player file at the Baseball Hall of Fame.) He was responding to the position taken by the Selective Service System that said he had a right to be rehired for a full year “conditioned only by the veteran satisfactorily complying with ordinary accepted standards of personal conduct and work performance required of other employees.” Bramham added his opinion that Niemiec “is one of the most dependable ball players that the club has had” and that “there is nothing in the record to reflect that he does not have the ability or background to continue in his former position.” The assistant United States attorney for the Seattle district said he would instruct the Rainiers that they must rehire him.10

In other words, Niemiec won his case and one can be sure that all of baseball was watching. Everyone understood that the precedent set by Niemiec’s case could affect thousands of returning veterans. Seattle said that Niemiec had a leg injury back in 1942, was now more than three years older, and they didn’t think he could play up to his prior level of work.

On May 20, in what might have averted a confrontation with Seattle, the Providence-Cranston Chiefs (New England League, Class B) signed Niemiec.11

US District Judge Lloyd L. Black on June 21 ordered that Seattle reinstate Niemiec and that he be paid a full season’s salary. Black said the club “need not play Niemiec but must pay him.”12 The money he had made playing for the Chiefs would be deducted from what Seattle was required to pay. On July 2 Rainiers owner Emil Sick provided a job for Niemiec, though the work was different – he was hired as a salesman for Sick’s brewery, the Rainier Brewing Company, and went to work selling beer.

In September Black upheld his decision, instructing Seattle to pay Niemiec the full $2,884.50 annual salary he’d been making in 1942, less $75 for his pay during the brief time he played for the Providence team and less $667 he’d been paid while working for Sick’s brewery.13

Years later, Niemiec said that after fighting the lawsuit, “I was too mad to play after that. But that was a test case. It helped a lot of boys get their jobs – or at least their pay.”14

In November 1947 Niemiec was hired to serve as general manager of the Great Falls, Montana, team in the Pioneer League, a Rainiers farm club. He worked there just the 1948 season.

Al Niemiec continued to live in the Seattle area. He turned to another sport and became a golf pro, working at golf courses at Juanita, Bellevue, and Redmond before retiring in the 1970s.15

A resident of Kirkland, Washington, Niemiec died at a convalescent center there on October 29, 1995. He was survived by his wife, Tessie, two sons, one daughter, three brothers, three sisters, and numerous grandchildren and great-grandchildren. It was requested that any donations be made to the Fred Hutchinson Cancer Research Center.

14 Bill Prochnau, “Little Leagues – A Rebel’s View,” Seattle Daily Times, May 5, 1962: 31. The article focused on Niemiec’s objections to the overcompetitiveness of Little League baseball at the time.