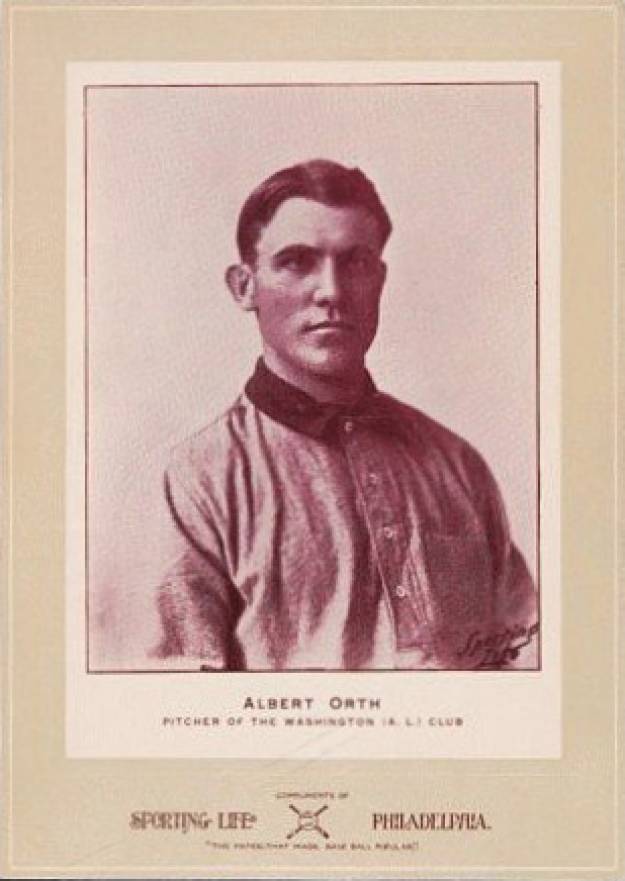 A typical Al Orth pitch was once described in a poem by W.A. Phelon as a “glistening ball… but little speed, and scarce a curve at all.” During his 15-year major league career, “The Curveless Wonder” won 204 games, yet struck out just 948 batters in more than 3,300 innings pitched. The burly six foot, 200-pound right-hander threw with a seemingly-effortless delivery, and relied on pinpoint control to overcome batters. “To the spectators Orth pitched a ball that it seemed must be easy to hit,” J.E. Wray observed in 1928, “yet year after year he kept on ‘fooling’ the batsmen.” Though some reports indicate he had a good fastball early in his career, and once even tinkered with a curve, by the late 1890s his success on the mound was the result of his “slow ball.” During the Deadball Era, Fred Lieb later related, Osee Schrecongost of the Philadelphia Athletics once caught one of Orth’s pitches barehanded while batting against him. Nonetheless, Orth remained an effective pitcher during the early years of the new century, and posted career highs in wins (27) and strikeouts (133) for the New York Highlanders in 1906.

Albert Lewis Orth was born on September 5, 1872, and raised in Danville, Indiana. Orth attended Depauw University in Greencastle, Indiana and following his stay there the right-hander’s baseball career began to take shape. Some reports have Orth playing in Lebanon, Indiana, before making his professional debut with a club in Indianapolis but it was not until he joined the Lynchburg Hill Climbers of the Virginia League that he began to make a name for himself. By mid-August 1895, Orth was pitching well for Lynchburg, putting together a 24-7 record and attracting attention from major league scouts. Lynchburg rejected a $500 offer from the Pittsburgh Pirates before selling Orth’s services to the Philadelphia Phillies for $1,000. Orth appeared in a major league uniform for the first time as the seventh-place Phillies (48-41 and eight games back of National League leading Cleveland) hosted New York at the new Philadelphia home park (later known as the Baker Bowl).

In a game that was described by the Washington Post as a “travesty on baseball” Orth watched as his teammates racked up a 20-9 lead after 7 innings. With the lead seemingly safe Orth came in to mop up in the eighth inning. He was greeted by the home crowd with cheers and kept New York scoreless over the next two innings allowing just two singles and walking none while helping the Phillies pad their lead by hitting a double off the fence on the first pitch he saw as a major league batter and later coming around to score in the Phils’ 23-9 win. Two days later, on August 17, Orth made his first major league start against Boston and managed to get the win despite giving up 7 runs on 12 hits as his teammates scored 17 runs in the new hitter-friendly Philadelphia ballpark.

Orth’s early success and overwhelming run support (the Phillies averaged more than 11 runs per game in his 10 starts) continued through the rest of the 1895 season. He strung together eight consecutive wins (one start ended in a tie) before spoiling his perfect record in his last start of the season, a 6-3 loss to Brooklyn, and finished the year at 8-1 with an excellent 3.89 ERA while displaying excellent control by yielding only 22 walks in 88 innings of work.

During his next six seasons with the Phillies Orth won at least 14 games every year, ranked third in the NL with a 2.47 ERA, and brought his victory total to an even 100 wins against 72 losses. On October 13, 1898, Orth pitched and won both ends of a doubleheader against Brooklyn. In 1901, Orth won 20 games for the first time in his career and led the league in fewest walks per nine innings, as he surrendered just 32 free passes in 281⅔ innings of work.

Like many of his Philadelphia teammates, following the 1901 season Orth jumped to the American League, signing with the Washington Senators. Orth again posted the lowest walk rate in his league in 1902, with just 40 base on balls allowed in 324 innings. Unfortunately, Orth only struck out 76 batters that year, finishing with a 19-18 record and subpar 3.97 ERA. He was even worse in 1903, winning 10 games against 22 losses while posting a horrendous 4.34 ERA. After starting the 1904 campaign 3-4 with a 4.76 ERA, Orth was traded to the New York Highlanders for Tom Hughes and Barney Wolfe.

Shortly after his arrival with the Highlanders, Orth turned his season around, helping to keep New York in the pennant race until the last day of the season with an 11-6 record and league-average 2.68 ERA. Orth’s turnaround was probably due in part to teammate Jack Chesbro, who rode the spitball to a 41-win season that year. Orth himself said he first used the spitball at the end of the 1904 season and considered the pitch “more effective than a curve” with a “quicker break.” Orth threw it “regularly” in the 1905 season, as he posted an 18-16 record with a 2.86 ERA for the sixth place Highlanders.

Perhaps because of his growing familiarity with the new pitch, in 1906 Orth set a career high in victories. His 27 wins and 36 complete games led the American League, and he registered a career-high 133 strikeouts in 338⅔ innings. The Highlanders finished the year in second place, three games out, but the campaign would mark the last time in Orth’s career that he would come close to winning a pennant. In 1907, the Highlanders dropped to fifth place, and Orth tied for the league lead with 21 losses, making him the first pitcher in baseball history to lead his league in wins one season and losses the next.

In 1908 Orth was even worse, posting a 2-13 record with a miserable 3.42 ERA before drawing his release in August. Orth returned to Lynchburg, where he made his off-season home, and purchasing a share in the local franchise in the Virginia League, assumed the role of player-manager. He had begun the 1909 season in that capacity when reports emerged that he had been approached by George Stallings, the new manager of the struggling Highlanders, with an offer to rejoin the club.

Rather than letting him pitch (Orth appeared on the mound in only one game for the Highlanders in 1909, surrendering four runs in three innings of work), Stallings kept Orth on the roster for his offense. Orth had always been one of the best-hitting pitchers in the game, finishing his career with a .273 batting average and 12 home runs, and batting over .300 in five different seasons. In his last stint in the majors, however, the 36-year-old finished the year with a .265 batting average and one extra base hit in 34 at-bats. After initially appearing as a pinch-hitter, Orth played at second base in six games, committing no errors in 26 chances while impressing no one with his range. As Ring Lardner observed after one contest, the “game must have convinced George Stallings of one thing if he was watching it closely, and that is that Al Orth has much to learn about playing second base.”

Following his stint with the Highlanders, Orth signed with the Indianapolis Indians of the American Association for the 1910 season but didn’t last long there and rejoined Lynchburg in July of that year. By 1912 he had signed on with the National League as an umpire, a role that had been foreshadowed in 1901 when Orth, while still playing for the Phillies, was one of three players who replaced umpire Bob Emslie after the latter had become ill between games of a doubleheader. Orth served as an NL ump until 1917. In addition to umpiring, Orth worked as a baseball coach for Washington and Lee University and the Virginia Military Institute and spent time with the YMCA as an athletic director for American troops stationed in France during World War I.

Orth died in Lynchburg on October 8, 1948, at the age of 76 and was survived by two sons and his wife, the former Jimmie Allen, whom he had married following his rookie season with the Phillies in 1895. He was buried in Spring Hill Cemetery in Lynchburg.