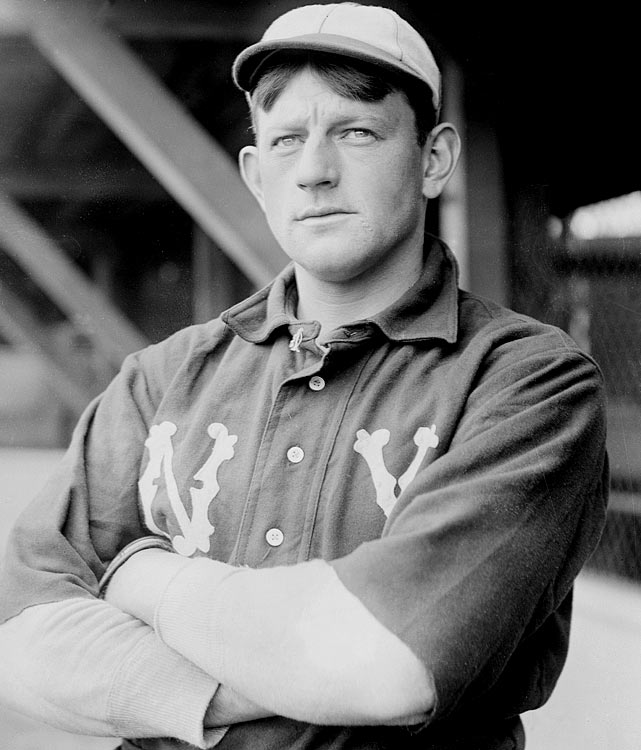 The band played Tessie as the penultimate game of the 1904 season moved into the ninth inning. For the first time the AL pennant had come down to the final day in a doubleheader pitting the defending champion Boston team versus the upstart New Yorkers. Jimmy Collins’s Champions1 had broken swiftly from the gate and threatened to lap the field as they had done in 1903. Then they stumbled in July and New York surged into the tightening race along with Chicago, Cleveland and Philadelphia. The teams jockeyed daily for position and, as late as August 29, five teams were within five games of the lead. When the other clubs fell off the pace, Boston and New York remained and were scheduled to meet five straight times in the season’s final series with the Champions clinging to a half-game margin.

That Friday in New York, “Happy Jack” Chesbro continued one of the greatest pitching seasons in history by recording his 41st victory in a 3-2 decision. The New Yorkers were now in the driver’s seat as a split of the remaining games would be enough for the pennant. When the schedule was released in the spring, all five contests were scheduled for American League Park. But earlier that summer, New York owner Frank Farrell rented out his grounds to the Columbia football team for their October 8 game against Williams.2 Thus, instead of playing four more games at home, Clark Griffith’s men traveled to Boston for the first of the two doubleheaders in the series.

The Huntington Avenue Grounds were packed with hordes of rabid Bostonians and the New Yorkers wilted under the pressure. In the opener, Griffith started Chesbro again. There was a rumor Griff told his ace to stay home and rest for Monday’s contests but that the right-hander met the team at the station and demanded to pitch.3 Regardless of how it occurred, the move backfired when “Happy Jack” fell apart in the fourth inning and gave up six runs. Cy Young outdueled Jack Powell 1-0 in the second game and the race was flipped on its head. Now all Boston needed was either a win or a tie to repeat.

The teams traveled back to New York for the Monday doubleheader and Griffith had no choice but to go once more with his best. Chesbro took the mound in a rematch against his Saturday opponent “Big Bill” Dinneen. The large crowd was strongly in favor of the home team but a two hundred-strong contingent of Boston’s noted Royal Rooters more then held their own with the help of Dockstader’s Famous Minstrel Band.4

The game was scoreless in the bottom of the third when Chesbro came to bat for the first time. As he stood in, the contest was stopped so a delegation of fans could present him with an elegant fur coat and hat in appreciation of his work that season.5 The gift must have inspired the pitcher for he drove Dinneen’s offering deep into right field for a triple. The crowd roared and the lead run stood on third with only one out and the top of the order up.

Patsy Dougherty began the season with the Champions but was shipped to New York in a controversial July trade. The local Boston fans were enraged by a deal which exchanged a star player for a spare part named Bob Unglaub.6 Dougherty had become a thorn in the side of his former club, perhaps motivated by negative press from the paper that also owned the team. General Taylor’s Globe labeled the left fielder “moody and insubordinate” and he must have taken special pleasure in starring in Friday’s win.7 Now he had the chance to rub it in a little more to the General and his son John I Taylor, but perhaps he was overanxious and Dinneen fanned him on three pitches.8 When Wee    Willie Keeler also struck out the noise abated and the game remained scoreless.

New York finally broke through in the last of the fifth. Two men were out when catcher Red Kleinow singled to right. Chesbro was next and helped his cause with a smash the Boston pitcher was able to knock down but could not field cleanly.9 Up came Dougherty who brought the crowd to its feet with a two-strike hit that scored Kleinow and moved Chesbro to second. The roar continued as “Big Bill” walked Keeler to load the bases and then compounded Boston’s woes by passing Kid Elberfeld to force in a run. Jimmy Williams stood in with a chance to break the game open, but the second baseman’s luck had deserted him this day. For the third time he grounded back to the box and Dinneen’s easy throw retired the side.

Chesbro had only given up a pair of hits and led 2-0 when Boston came to bat in the top of the seventh, but then chance and the New York defense conspired to betray him. Candy LaChance led off and hit a ball over the mound that was too slow for Williams to play10 and then Hobe Ferris singled to right. After Lou Criger sacrificed, Dinneen hit a routine grounder to second base and LaChance broke for the plate. Williams’s nightmare continued as he fielded the ball in plenty of time to make the play but his low throw hit the dirt and bounded away allowing Ferris to score as well. Instead of a rally-killing out, the game was tied and the clamor of the Royal Rooters now echoed around the park.

Chesbro bore down, perhaps angered by the turn fate had handed him or by his own tardiness in covering the plate.11 He induced Kip Selbach to ground to second and then stranded Dinneen at third when Freddy Parent flew to right. The next inning was almost as rocky as the Champions strung together three hits and only a fine relay from center fielder John Anderson to Elberfield and then Kleinow cut Chick Stahl down at the plate. New York’s bats continued to slumber and the game moved into the final frame tied at two.

Criger was first up and he hit yet another slow roller that the New York infield could not convert into an out. Dinneen sacrificed and Selbach’s grounder moved the winning run 90 feet away with two out. Parent stood in and Chesbro got a pair of strikes over before rearing back and throwing his “money pitch,” the spit ball.12

What happened next would become as haunting to New Yorkers of a certain age as the ball going through Bill Buckner’s legs would be to their future New England counterparts. Chesbro’s pitch sailed and, in an awful bit of anticlimax, cleared Kleinow’s lunge and hit the front of the grandstand on the fly.13 Criger trotted home as the park fell silent save for the celebration of the Royal Rooters and their hired band. A stunned Griffith dropped to the ground in anguish in front of the New York bench.14 Chesbro gave up a hit to Parent before retiring Stahl. The alternately haunting and annoying strains of Tessie could be heard as the New Yorkers prepared to send up the bottom of their order. Chesbro himself was distraught, sitting despondently on the bench and waiting for the end.15

But it had been a long season for Dinneen and entering his 335th inning of the year he seemed justifiably tired. Charlie Ganzel led off and fanned but then Conroy walked on a close pitch.16 Kleinow popped out to Ferris and  Deacon McGuire batted for Chesbro. The ancient catcher had played his first major league game some twenty years earlier and used his experience to coax another base on balls off of Dinneen. Dougherty then came to the plate with the season on the line.

Dougherty worked the count to 2-2 and then Dinneen reared back and threw the last meaningful pitch of 1904. It was a good one and Dougherty took a cut and missed it and then the Boston players were slapping each other on the back in congratulations of their repeat pennant. The second game went quickly as New York triumphed 1-0 to leave the final margin at 1 1/2 games. Despite playing in the first “modern” World Series the previous year, Boston would be idle as the NL champion Giants refused to meet them.

The 1904 season would be the high water mark of Griffith’s and Collins’s squads. Both teams would fall from those heights and only return to the limelight with different players in different ballparks. But even years later after autumn glory was common at Yankee Stadium, people would still discuss “Happy Jack” Chesbro’s wild pitch17 that decided the first great pennant race in American League history.

The game is significant to the author because it is the climactic contest of the first ever Red Sox-Yankees pennant race (even if both teams were years away from those nicknames) and is often forgotten today. It also figured prominently in several baseball books that the author read as a child which kindled his interest in the history of the game.

1 Newspapers frequently referred to Boston as the “Champions” throughout the year based on their pennant and defeat of Pittsburgh in the World Series the previous fall.

6 Unglaub would appear in nine games for Boston and post an OPS+ of 37 with -0.2 WAR. Dougherty finished up the season with an OPS+ of 120 for New York and 1.3 WAR for his time with the team.

17 There is some dispute over whether Chesbro should have been charged with a wild pitch or Kleinow with a passed ball. The pitch apparently haunted Happy Jack and there were posthumous attempts to clear his name. According to Jim Reisler in Before They Were Bombers, Chesbro’s wife lobbied unsuccessfully to have the scoring of the play changed to a passed ball and Clark Griffith maintained the blame belonged to Kleinow. However, all seven of the contemporary newspapers I consulted for the game story – the Boston Globe, Boston Herald, Boston Post, New York Times, New York World, New York Sun and New York Evening Telegram all unambiguously stated the play was a wild pitch. When faced with the revisionist history of the passed ball tale in the early 1940s, Fred Lieb asked Kid Elberfield about the play. According to Lieb in The Boston Red Sox, Elberfield said the ball “rode so far over Kleinow’s head that he couldn’t have caught it standing on a stepladder.” It seems that the overwhelming contemporary consensus of a wild pitch is the most reasonable interpretation of the play and that is how I wrote the story.