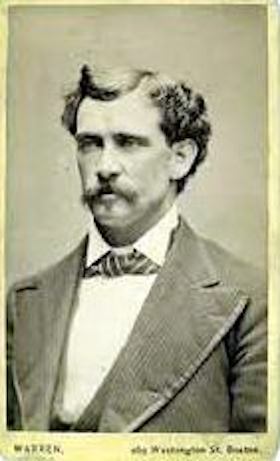 He was born in Ireland during the Potato Famine, named for an American president, and crossed the ocean as an infant to become a star in a game that was unknown in his native land at the time. Eventually, baseball came to flourish in Ireland. In the present Irish Baseball League the most outstanding player annually receives the Andy Leonard League Most Valuable Player Award.

Andrew Jackson Leonard was born on June 1, 1846, in County Cavan, Ireland, a son of Ann Liddy and Andrew Leonard. One might wonder why Irish parents named a baby after an American president. Actually, such a thing was not all that unusual. Old Hickory was the first president of the United States of Irish ancestry, and was exceedingly popular in Ireland at the time. County Cavan was suffering in the late 1840s. Starvation was rampant, caused by the failure of the 1845 potato crop, on which the county’s economy was dependent. Ann Leonard, her youngest son, Andrew, and his two sisters, Ann and Catharine, fled to America, sailing from Liverpool on the ship Milan, which arrived in New York on June 13, 1848. They settled in Newark, where they were joined by the family’s three oldest sons, John, Thomas, and Richard. No record can be found of what happened to their father.

Growing up in Newark, Andy Leonard quickly took to the game of baseball. It has been reported that he joined the Hudson River Club of Newburgh, New York, in 1866 at the age of 18.1 After playing two seasons in Newburgh, the youngster returned to New Jersey and joined the strong amateur club in Irvington, a suburb of Newark. Leonard and his teammate, Charlie Sweasy, earned considerable attention for the quality of their play during their two years in Irvington. Sweasy was from the same Newark neighborhood where Leonard had learned the game. In 1868 the two went west together to Cincinnati, where they joined the Buckeyes, the strongest team in the Queen City. It is likely they received some inducement to go to Cincinnati. Probably they were not paid under the table. In the amateur era, it was common practice for supporters of a club to secure players well-paying jobs that allowed them the opportunity to play baseball in their off-duty hours. Sweasy and Leonard both found employment as hatters,

In his earlier years, Leonard had been an infielder, usually playing at shortstop. Harry Wright’s brother George Wright was going to be the shortstop for the Red Stockings and the other infield positions were filled as well, so Wright placed Leonard in left field. Andy mastered the position and played in the outer garden the rest of his career, with only occasional assignments in the infield. In his history of baseball in Cincinnati, Harry Ellard noted that Leonard was a brilliant left fielder but he “ranked the best as a batsman.”2 Ellard called Leonard a “jolly, good-natured fellow.”3

The praise of Leonard as a batsman was justified by some of his accomplishments during the Red Stockings’ remarkable 1869 season. In a July 22 game against their crosstown rivals, the Buckeyes, Leonard came to bat three times in the fourth inning and hit a single, a triple, and a home run, almost hitting for the cycle in a single inning.4 On the Red Stockings’ tour of the West, the Cincinnatians played the Pacific Ball Club in San Francisco on September 29. Leonard hit three homers, including a grand slam, in the rout. A California reporter described the slam: “The striker carefully measured the ground with his eye and sent the ball whizzing along the grass out past right field and over the graveled outside walk, enabling every man on base to get safely home and the striker himself to make a home run. It was a very effective strike.”5 Yes, it was – very effective!

In an 1870 mismatch against the Union Base Ball Club in Urbana, Ohio, Leonard collected at least one hit in each of the nine innings played.6 Even considering the 1870 rules favoring the batter and the quality of the opposition that day in Urbana, it was quite an accomplishment.

Praise for Leonard’s fielding started when he was a shortstop in Irvington and continued throughout his career until his vision started failing. One newspaper called him “one of the ‘Class A’ of outfielders. In all respects he is superior, being a perfect judge, a sure catch, and a wonderful long thrower.”7 Another paper opined that “as regards accuracy of throwing, Leonard at left field has no superior. He has so repeatedly thrown in the ball from that position to the home plate with such unerring precision that the runner on third base has not dared attempt to reach home.8

Leonard was lauded by future Hall of Famer Cap Anson, one of the 19th century’s top performers, as “a splendid judge of high balls, a sure catch … a swift and accurate long-distance thrower … a good batsman and a splendid base runner.”9

Apparently Leonard developed a high opinion of himself as an outfielder. Wright complained about Leonard and right fielder Cal McVey saying how they “dislike exceedingly, when playing in the field, to be told to change their positions when certain players come to the bat … seemed to think it was a reflection on them or their judgment as players, when told by the pitcher or captain to change or move in the field.”10

After the 1870 season the Cincinnati Red Stockings reverted to amateur status. The National Association, often considered baseball’s first major league, was formed in 1871. Harry Wright took several Cincinnati players, not including Leonard, with him to Boston, where he called the new club Red Stockings. Why Wright did not take Leonard with him to Boston is not known. However, Wright wanted no drinkers on the team, and it was said that Leonard “would occasionally kick over the traces.”11

Leonard and teammates Asa Brainard, Doug Allison, Charlie Sweasy, and Fred Waterman joined the Washington Olympics of the National Association. On May 5, 1871, the 5-foot-7-inch, 168-pound, right-handed Leonard became the first native of Ireland to play in the major leagues. He spent only one season with the Olympics. His most notable performance during his season in the nation’s capital came on July 7, when he scored three runs in one inning in a game against the Fort Wayne Kekiongas. In 1872 he was reunited with his former manager, Harry Wright, in Boston. He hit over .300 in each of his four years with Boston in the National Association. Wright had a powerful aggregation in Boston. The Red Stockings won the league championship each year that Leonard played for them in the National Association.

Anti-Irish prejudice was rife in Boston in the 1870s. Signs “No Irish Need Apply” were common in shop windows. Jim O’Rourke, a talented young outfielder, was offered a contract to play for Boston in 1873, on the condition that he change his name. Wright requested the young man to drop the O from his surname to mask his otherwise obvious Irishness. To his credit the player refused. “I would rather die than give up any part of my father’s name. A million would not tempt me.”12 Wright relented and signed O’Rourke anyway. (O’Rourke went on to a long and distinguished major-league career. He was inducted into the National Baseball Hall of Fame at Cooperstown in 1975.) Soon the Red Stockings added more players of Irish descent. Most prominent were Leonard, John Morrill, Tim Murnane, and Tommy Bond. They led Boston to championship after championship.

In July 1874 the Boston Red Stockings and the Philadelphia Athletics were given a three-week break from the National Association schedule, so they could introduce the game to the British Isles. The British showed little interest in baseball, and few fans showed up at the games. The highlight of the trip turned out to be a cricket match between the Americans and the Marylebone club, one of the strongest in England. Harry and George Wright were experienced cricketers, but most of the Americans knew little about the game. The Wrights conducted a crash course for their countrymen on rules and strategy. When the game commenced several of the Americans forgot the defensive strategy, crushing the ball as far as they could hit it. The Americans won the match 107-105, with Andy Leonard scoring 12 runs. The Americans spent two days in Ireland, defeating an all-Ireland team in cricket, 165-79. Leonard scored 26 runs in a match at Cavan, the place where he had been born 28 years earlier.

Leonard’s grandson, Charles McCarthy, said his grandfather made a triumphal return to his native country: “Oral family history has him returning triumphantly to his hometown, Cavan, as both an American champion ballist and as a native-born Irishman, survivor of the Great Hunger (or Famine), who had battered the English cricket champions silly at their own game.”13

During the same year as the British trip, 1874, Andy Leonard married Alice Nugent, the 22-year-old daughter of Irish immigrants. They eventually had six children, four of whom – Andrew, William, John, and Alice – survived to adulthood.

With his skills starting to decline, Leonard spent the 1879 season in the minor leagues. He reverted to shortstop, the same position in which he had starred as a youth. He played this demanding position for the Rochester Hop Bitters in the National Association (now reconstituted as a minor league) and hit .302 in 20 games.

In 1880 Leonard attempted a comeback in Cincinnati, the scene of so many of his earlier triumphs. Failing eyesight forced his retirement in midsummer. He played his final major-league game at the age of 34 on July 3, 1880. His errors allowed Providence four earned runs as the Reds lost, 6-4.

After retiring from baseball, Leonard returned to Newark, where he worked for the Water Department for some time. He then went to Boston to work as a sales clerk in a sporting goods store opened by his former teammate, George Wright. Leonard continued in that employment until shortly before his death from a gastric ulcer at the age of 57. Andrew Jackson Leonard died in Roxbury, Massachusetts, on August 22, 1903. He was buried in the New Calvary Cemetery in Boston.

12 David L.Fleitz, The Irish in Baseball (Jefferson, North Carolina: McFarland, 2009), 7-8. Fleitz says the story may be apocryphal. It had been reported in The Sporting News, February 10, 1948.

13 The account of the trip to Britain is taken from Fleitz, 8-9.