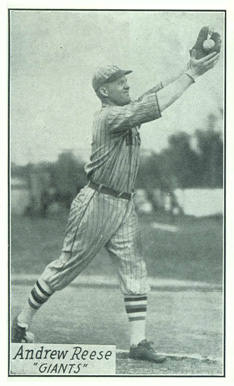 Andrew Jackson Reese was born on February 7, 1903 or 1904,1 in Tupelo, Mississippi, the youngest of seven children born to Mayfield Reese and Annie Lee. Mayfield was a farmer2 and a Tupelo city policeman.3 Andy starred at baseball, football, basketball, and track at Tupelo High School and the Gulf Coast Military Academy,4 and as a college freshman at Vanderbilt University.5

Hoping to retain his college eligibility, Reese played professional baseball in 1925 under the pseudonym Tidbit Bynum for his hometown Tupelo Wolves of the Class D Tri-State League. A Vanderbilt University coach heard about it and that put an end to Reese’s collegiate career.6 In his first season of pro baseball, Reese played the outfield and batted .339 for the Wolves, leading the Tri-State League in runs, hits, and total bases. In August 1925 the Memphis Chickasaws, managed by Clyde Milan, purchased Reese from the Wolves.7

Reese played the outfield for the Memphis Chicks in 1926, batting .307 with 22 triples, 20 stolen bases, and 102 RBIs.8 His talents caught the eye of New York Giants scout Larry Doyle, who recommended Reese to John McGraw.9 The Giants acquired Reese from Memphis for $15,000. Tim Mara of the New York football Giants also offered Reese a contract, but McGraw nixed that, fearing his new acquisition could be injured playing pro football.10

In April 1927 Reese had six hits and scored four runs for the Giants in an exhibition game against his old team, the Chickasaws.11 In his first major-league game, he played left field and hit two singles as the Giants defeated the Philadelphia Phillies. In May Reese made a spectacular shoestring catch in right field and smacked two hits off Reds pitcher Eppa Rixey.12 Reese played third base, batted leadoff, and scored four runs in a win over the Cardinals in July.

One day McGraw fined Reese $50 for hitting a home run – because Reese ignored the bunt sign from the third-base coach. “I bunted the hell out of it,” said Reese.13 McGraw thought highly of the energetic youngster, calling him a second Ross Youngs. Reese is “a fighter and a hustler,” said McGraw, “and that’s what I like.”14

Reese finished the 1927 season with a .265 average in 355 at-bats. In the offseason he married Margaret Stone of Madisonville, Kentucky, in a ceremony at Clarksville, Tennessee.15 One of the attendants was Horace “Hod” Lisenbee, a Clarksville native who won 18 games in 1927 (including five against the Yankees) as a rookie pitcher for the Washington Senators. Reese and Lisenbee were teammates at Tupelo in 1925 and at Memphis in 1926.

In early 1928 Reese and teammate Lefty O’Doul trained with 41-year-old Ty Cobb in Cobb’s hometown of Augusta, Georgia, prior to Cobb’s final season. “He made Lefty and me come out every morning at 7 o’clock and hit,” said Reese, who gave credit to Cobb for O’Doul’s 1929 NL batting title.16 The tutoring must have helped Reese, too; he batted .308 in 1928, with only 24 strikeouts in 406 at-bats.

In July 1928 Reese played left field and had five hits in a game against the Cardinals, and against the Cubs he played shortstop and had four RBIs. In September he had four hits against the Phillies while playing second base. He played every infield and outfield position that year. McGraw called him “the most promising all-around ballplayer among the youngsters of the National League,” and said Reese would try pitching and catching, too, if asked.17

New York sportswriters were impressed with Reese’s athleticism and charmed by his down-home country manner. They called him “the Tupelo Flash”18 and also “Handy Andy”19 for his versatility. “Tupe,” as his teammates called him, was one of the most likable men on the team.20 One reporter wrote about Reese’s watermelon patch and his 104-pound watermelon that won first place at the Tupelo county fair.21 Another writer described Reese’s accent as “the thickest Southern brogue in the big leagues.”22 Reese’s teammates included Hall of Famers Bill Terry, Travis Jackson, and Mel Ott, all from Dixie.

Reese suffered a foot injury early in the 1929 season and was seen “hobbling from clubhouse to dugout on an infected foot.”23 The foot improved, and in consecutive games against the Cardinals in late July, Reese batted leadoff and went 6-for-12 with five runs scored and four stolen bases. However, a week later, he had “a bad foot again”24 and was sidelined for the rest of the season. He finished the year with a .263 average in 209 at-bats.

In April 1930 Reese hit a grand slam against Brooklyn. He developed a sore throwing arm early in the season, which one reporter described as “so lame that he really belongs on the bench.”25 Reese played sparingly and was demoted in late August to the Bridgeport (Connecticut) Bears of the Eastern League, one of the Giants’ farm clubs.26 His once-promising major-league career was over.

In the offseason the Giants traded Reese to the Oakland Oaks of the Pacific Coast League.27 In April 1931 he hit two home runs for Oakland in a game against Los Angeles.28 His arm troubles continued, though,29 and the Oaks released him in June.30 He rejoined the Memphis Chickasaws, and thus began his remarkable run of nine seasons as a star and leader of the Memphis team.

Reese was player-manager of the 1940 Greenville (Mississippi) Buckshots of the Class C Cotton States League, and player-manager of the 1941 Gadsden (Alabama) Pilots and 1942 Meridian (Mississippi) Eagles of the Class B Southeastern League. During World War II he worked at the Gulf Ordnance Plant in Prairie, Mississippi,35 which produced 57mm shells for the war effort.36 After the war, Reese worked for the Herb Sadler Distributing Company in Memphis and the Pennsylvania Tire Company in Tupelo.37

Norris Caldwell Jr. played on Tupelo High School baseball teams in the 1940s. “To all of us growing up in that era, Andy Reese was our idol,” Caldwell said.38 Reese attended high school games and encouraged the young ballplayers.

Reese was voted the most popular Memphis Chicks player of all time.39 He was twice honored by an Andy Reese Day celebrated at Russwood Park in Memphis, in 1934 and again in 1938.40 He was also honored prior to a Chicks game in 1959.41

Reese died on January 10, 1966, in Tupelo. In 1969 he was inducted into the Mississippi Sports Hall of Fame.42 Since the 1970s, young ballplayers have been developing their skills at Andy Reese Field, 1107 Joyner Avenue in Tupelo – a fitting tribute to the Tupelo Flash.

1 Sources disagree on his year of birth.

34 It is unclear whether Reese or Eddie Rose is the all-time Southern Association leader in RBIs. Rose had 866 RBIs, and Reese had either 867 or 865 RBIs, depending on the source.